SSE, one of Britain’s largest energy companies, has had to apologise after it advised customers to do star jumps, cuddle pets and eat porridge to stay warm in a blog post.

OVO Energy owns SSE and said they are “embarrassed” by the blog, which was sent to customers “containing energy-saving tips”.

The post has been removed by by the company, which said in a statement: “We understand how difficult the situation will be for many of our customers this year. 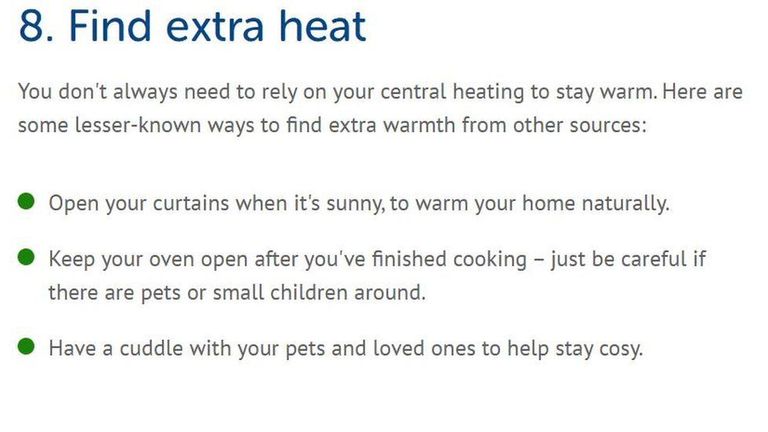 “We are working hard to find meaningful solutions as we approach this energy crisis, and we recognise that the content of this blog was poorly judged and unhelpful. We are embarrassed and sincerely apologise.”

The blog offered 10 tips on “keeping warming in the winter without turning up the heating”.

COVID-19: Travel rules have changed again – what are…

It included advice such as wearing extra clothes and keeping the oven open after “you’ve finished cooking”.

Labour politician and chair of the Commons business select committee Darren Jones said he is “glad they apologised”.

“I’m not sure who signed off a marketing campaign telling people to wear a jumper and eat porridge instead of turning on the heating if you can’t afford it,” Mr Jones wrote on Twitter.

In September 2019, SSE announced that it would be selling its retail business to OVO Energy and the takeover was finalised in January 2020.

Energy prices could double by April

It comes after concerns over the cost of living amid rising energy bills.

On 10 January, Prime Minister Boris Johnson told reporters at a pharmacy in Uxbridge that he had discussed the cost of living pressures with Rishi Sunak on Sunday night and believes ministers have “got to help people, particularly on low incomes”.

Mr Johnson’s government has come under increased pressure to act in recent weeks.

Experts have predicted that rising wholesale fuel costs will result in a 50% rise in bills from April, when the latest change to the energy price cap takes effect.

If this comes to pass, an average household on a supplier’s default tariff would face paying nearly £2,000 a year for gas and electricity, compared to under £1,300 at the moment.

Labour says the package of support would save most households around £200, while targeted support for those on lower incomes, pensioners and the squeezed middle would mean they save as much as £600.

The government already plans to expand to around three million people this year – and increase the rebate to £150.

Man receives ‘die or do’ surgery, as doctors in Maryland use pig heart during transplant

‘Partygate’ allegations: Boris Johnson can run but he can’t hide and PM is now under enormous pressure

Climate crisis: How easy is it to drive from London to COP26 in Glasgow using an…

COVID-19: NHS to visit hundreds of schools to offer…