The prime minister and his wife Carrie were among around 40 people to attend a drinks event in the Downing Street garden during the UK’s first national COVID lockdown, Sky News understands.

In what has been revealed to have been a “bring your own booze” event on 20 May 2020, a Downing Street figure said both Mr Johnson and his then fiancee were present.

The families of those who have died during the coronavirus pandemic reacted with fury at the latest revelations in the Number 10 “partygate” row, with one woman describing how the gathering was held on the same day her father’s death certificate was signed.

She also described how she “feels sick” that Mr Johnson later told her in person in the same garden that he had “done everything he could” to protect people such as her father during the COVID crisis. 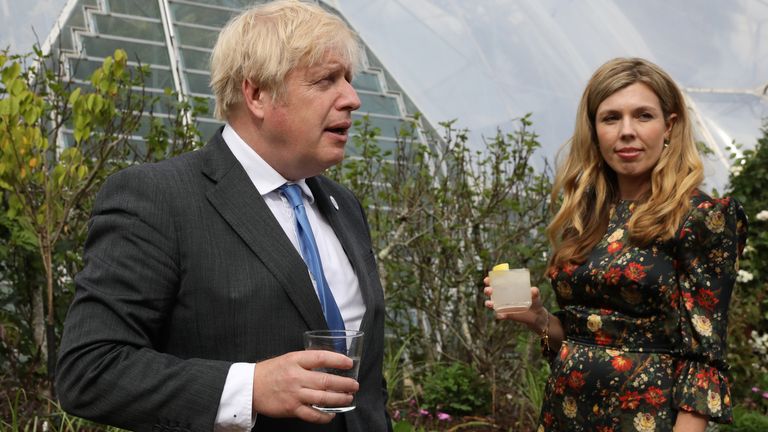 A Whitehall investigation is already under way into multiple allegations of coronavirus rule-breaking in both Number 10 and other government buildings, which was prompted by initial claims of Christmas parties in Downing Street in 2020.

The inquiry has since been widened to include two alleged events on 15 and 20 May 2020, the latter of which was initially revealed by Dominic Cummings – the prime minister’s estranged former chief adviser.

A leaked email has now emerged from Martin Reynolds – a key aide to Boris Johnson – inviting staff to “make the most of the lovely weather” with “some socially distanced drinks”.

According to ITV News, who obtained the email, Mr Reynolds’ message on 20 May was sent to more than 100 employees in Number 10, including the prime minister’s advisers, speechwriters and door staff.

Around 40 attendees are reported to have gathered in the garden that evening to eat picnic food and drink.

Analysis: PM can run but he can’t hide over ‘partygate’ and he is under enormous pressure

At the time, Britons had only recently been allowed to meet with one person from another household outside as long as they remained two metres apart.

On 20 May 2020, 363 more people were announced to have died after testing positive for coronavirus.

Oliver Dowden, then culture secretary, used a Downing Street news conference at 5pm that day – an hour before the planned Number 10 drinks event – to tell the public that “the vast majority of people” should be “staying at home as much as possible”.

On the same day, the Metropolitan Police posted a tweet to remind people they could only enjoy being outside if they were on their own, with people they live with, or on their own with one other person from a different household.

‘Bring your own booze!’

“After what has been an incredibly busy period we thought it would be nice to make the most of this lovely weather and have some socially distanced drinks in the No10 garden this evening.

“Please join us from 6pm and bring your own booze!

EXCL: Email obtained by @itvnews proves over 100 staff were invited to drinks party in No 10 garden at height of lockdown to “make the most of the lovely weather”.

We’re told PM and his wife attended, with staff invited to “bring your own booze!”https://t.co/rg34EIkdz2 pic.twitter.com/UORlSwwHJX

Using his nickname of “the trolley” for Mr Johnson, Mr Cummings on Monday posted on Twitter that the prime minister “was there” at the 20 May event.

Mr Cummings has previously claimed, in a blogpost last week, that a photograph of himself, the prime minister, Mrs Johnson with the couple’s newborn baby, and Mr Reynolds from 15 May 2020 – the date of another alleged Number 10 social event – was not an example of rule breaking but was instead the continuation of a Number 10 meeting. 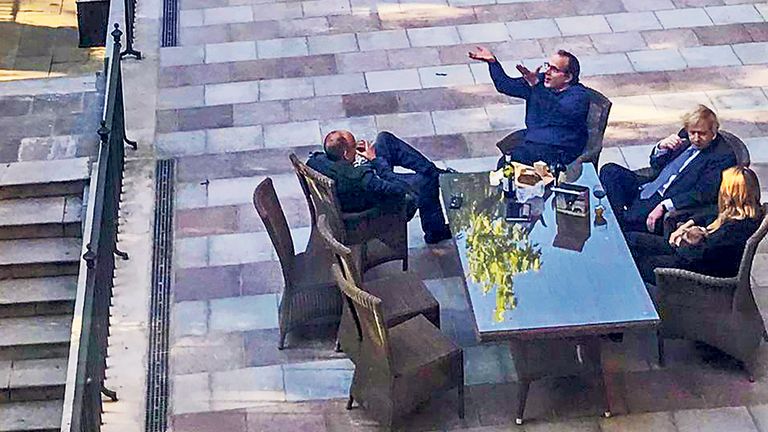 The image, published by the Guardian last month, appears to show the group enjoying wine and cheese as they sit at a table, while other groups are pictured also seemingly enjoying drinks in the Downing Street garden.

However, Mr Cummings also suggested in his blogpost that a 20 May event was against COVID rules and should be investigated.

PM’s key aide ‘has to be held accountable’

Doubts had already been cast over Mr Reynolds’ position in Number 10 following the initial claims of an event on 20 May.

Weekend newspaper reports suggested he was being lined up as a “fall guy” amid the “partygate” row. 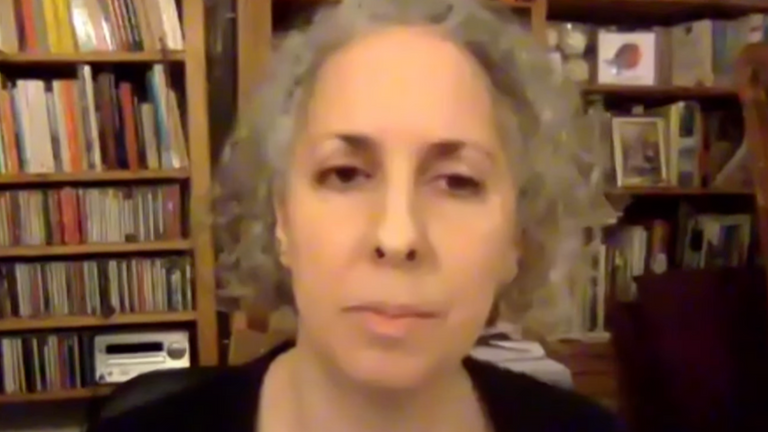 A senior government source told Sky News: “Reynolds job was to protect staff who were looking to him to lead them through something nobody had ever done before. This is just a perfect example of how he failed at it.

“Some people in Number 10 felt uncomfortable about it at the time. But the truth is nobody ever got to grips with working in Number 10 while the rest of the country were made to work from home.

“Reynolds didn’t protect people from the spread of COVID in the building and he and others didn’t think through the consequences of those actions.

“He was in charge of it all, he has to be held accountable for it.” 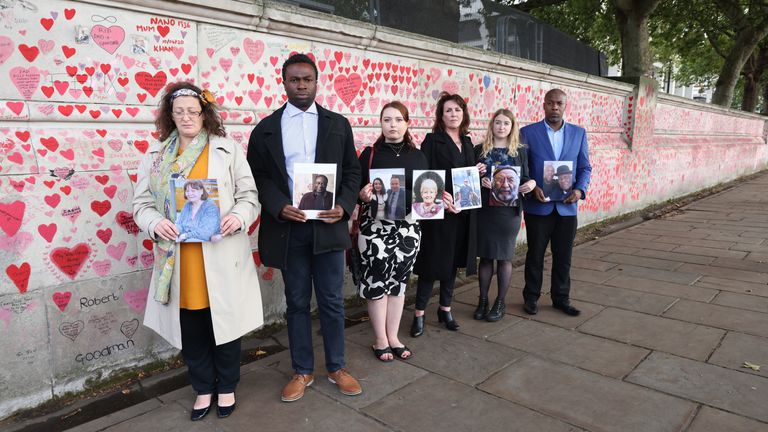 ‘It makes me feel sick to think about it’, says daughter of COVID victim

Hannah Brady, a spokesperson for the COVID-19 Bereaved Families for Justice campaign, revealed how her 55-year-old father – a “fit and healthy key worker” – died four days before the 20 May event in Downing Street.

“At the time, everyone would have known that going to a party was wrong, so how can those running the country have thought it was ok?,” she said.

“Could there be a more disgraceful example of ‘one rule for them, and another rule for the rest of us’?

“To make matters worse, in September last year I sat in that same garden, looked the prime minister in the eyes and told him how my dad had died.

“He told me he had ‘done everything he could’ to protect my dad, knowing that he had partied in that same spot the very day that dad’s death certificate was signed.

“It makes me feel sick to think about it.” Labour deputy leader Angela Rayner told Sky News that the prime minister “should go” if he was confirmed to have been at the Downing Street event on 20 May.

“It’s disgusting, it’s despicable,” she said. “At the time many people couldn’t see their loved ones who were dying.

“The British public were told to do the right thing to keep people safe, to look after their relatives.

“And we find out an email to over 100 people was sent out from Downing Street saying ‘come along to our party, bring your own booze, the weather’s nice’.

“The prime minister should know better. We were in a time of crisis and we needed good leadership and what we got is somebody who was good at telling lies and fibs.”

Ms Rayner also called for the results of the Whitehall “partygate” inquiry to be handed over to police for further investigation.

The Liberal Democrats also demanded a police investigation into reports about the 20 May event.

Their leader, Sir Ed Davey, said: “This is yet more evidence that while the vast majority of people were sticking to the rules, those in Number 10 were breaking them.

“It is a kick in the teeth for everyone who has sacrificed so much during the pandemic, from those who weren’t able to visit loved ones in hospital to nurses left wearing binbags as PPE.”

A Scotland Yard spokesman said: “The Metropolitan Police Service is aware of widespread reporting relating to alleged breaches of the Health Protection Regulations at Downing Street on May 20, 2020 and is in contact with the Cabinet Office.”

Number 10 would not comment on the leaked email from Mr Reynolds at a time when the inquiry into multiple allegations of COVID rule-breaking in Downing Street and other government buildings is still ongoing.

The investigation is being led by senior civil servant Sue Gray.

Earlier on Monday, the prime minister refused to answer a question about whether he and his wife attended a Downing Street party on 20 May.

“All of that, as you know, is the subject of a proper investigation by Sue Gray,” Mr Johnson said.

Man receives ‘die or do’ surgery, as doctors in Maryland use pig heart during transplant

Golden Globes 2022: Power Of The Dog, West Side Story and Succession…

Canoe believe it: Plastic waste could be used to make kayaks and milk…

False claims of election fraud spread in France after ‘computer…