Britain wakes up in mourning, and to a new monarch, King Charles III

A draw of Britain's Queen Elizabeth II is placed with flowers outside Buckingham Palace in London, Friday, Sept. 9, 2022.

Buckingham Palace announced on Thursday that Queen Elizabeth II had died — bringing to an end a 70-year reign.

A statement on the royal website said the 96-year-old monarch died peacefully at Balmoral Castle in the afternoon.

Elizabeth was the UK’s longest reigning monarch, taking the throne in 1952 upon the death of her father, King George VI.

She has been succeeded by her own son, Charles, will be known as King Charles III.

Buckingham Palace said the King and Queen Consort would stay at Balmoral overnight before returning to London on Friday.

“The death of my beloved mother, Her Majesty The Queen, is a moment of the greatest sadness for me and all members of my family,” he wrote.

“We mourn profoundly the passing of a cherished sovereign and a much-loved mother. I know her loss will be deeply felt throughout the country, the Realms and the Commonwealth, and by countless people around the world.

“During this period of mourning and change, my family and I will be comforted and sustained by our knowledge of the respect and deep affection in which the Queen was so widely held.”

The Fed is expected to cut rates again amid conflicting…

In a statement released on Thursday, US President Joe Biden and first lady Jill Biden described Queen Elizabeth II as “more than a monarch”, a leader who “defined an era”.

“In a world of constant change, she was a steadying presence and a source of comfort and pride for generations of Britons, including many who have never known their country without her,” they said in a statement released by the White House.

“Queen Elizabeth II was a stateswoman of unmatched dignity and constancy who deepened the bedrock Alliance between the United Kingdom and the United States. She helped make our relationship special,” they added.

An online book of condolences has been opened, with people able to leave their own messages about the Queen, with a selection of the notes set to be passed on to the royal family.

Those wanting to leave a message can visit the official website of the royal family.

Thousands gathered outside Buckingham Palace last night, despite the rain, to pay tribute to a monarch who has helped to guide her country for over seven decades. 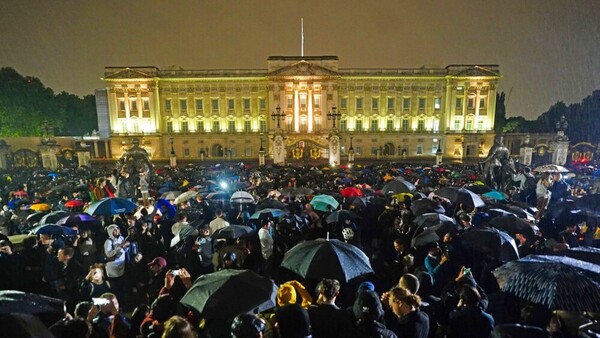 People gather outside Buckingham Palace following the announcement of the death of Queen Elizabeth II, in London, Thursday, Sept. 8, 2022. (Victoria Jones/PA via AP)

Queen Elizabeth II: Royal Family gather by monarch’s side as doctors keep her under supervision