Real Madrid produced a stunning last-gasp comeback to beat Manchester City and set up a Champions League final with Liverpool.

Pep Guardiola’s team led 4-3 from the first leg and looked in total control when Riyad Mahrez put them 1-0 up on the night, in the 73rd minute.

But it was one of Madrid’s substitutes that then turned the tie on its head.

Brazilian Rodrygo netted in the 90th minute and then again a minute later to send the match — tied at 5-5 on aggregate — into extra time.

Then when Karim Benzema fell in the penalty area under the challenge of Ruben Dias early in extra time, the referee awarded a spot kick. Real’s prolific striker, who has been in stunning form for the Spanish champions, scored into the bottom right-hand corner. 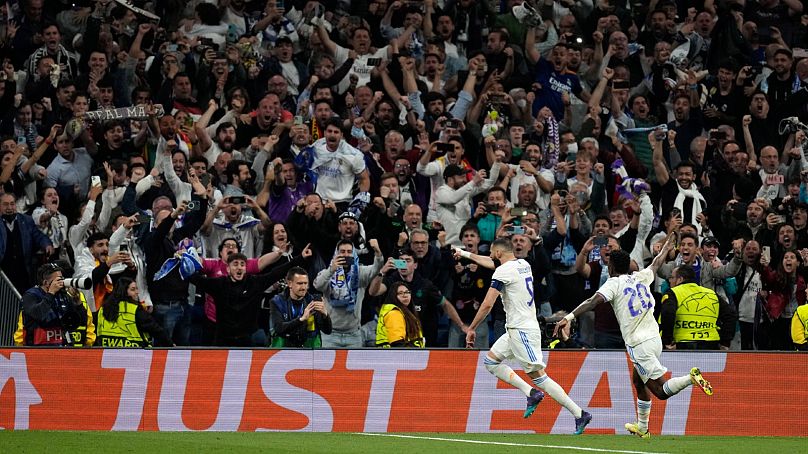 Many Real Madrid fans had given up hope

With Manchester City leading 1-0 on the night, the “Si se puede! (Yes we can!)” chants gradually faded at the Santiago Bernabéu.

With the match seemingly drawing to a disappointing end for Real, some of their supporters began heading for the exits. It seemed that there would be no magical night at the Bernabéu for the 13-time European champions this time.

“I didn’t think we could do it again because we were struggling,” Real Madrid goalkeeper Thibaut Courtois said. “We had already eliminated some top teams that spent a lot of money to try to win a Champions League, but today it was more impressive, happening in the final minutes.”

Real Madrid had already pulled off thrilling comebacks at the Bernabéu against Paris Saint-Germain in the round of 16 and Chelsea in the quarter-finals.

“I cannot say we are used to living this kind of life, but what happened tonight happened against Chelsea and also against Paris,” Madrid coach Carlo Ancelotti said. “If you have to say why it is the history of this club that helps us to keep going when it seems that we are gone.”

By doing it again against City, Madrid booked a spot in the 28 May final in Paris against Liverpool, who advanced after defeating Villarreal on Tuesday. Madrid defeated Liverpool in the 2018 final when the Spanish powerhouse clinched its record-extending 13th title.

“We have a score to settle,” Liverpool forward Mohamed Salah said on Twitter after Madrid’s win. 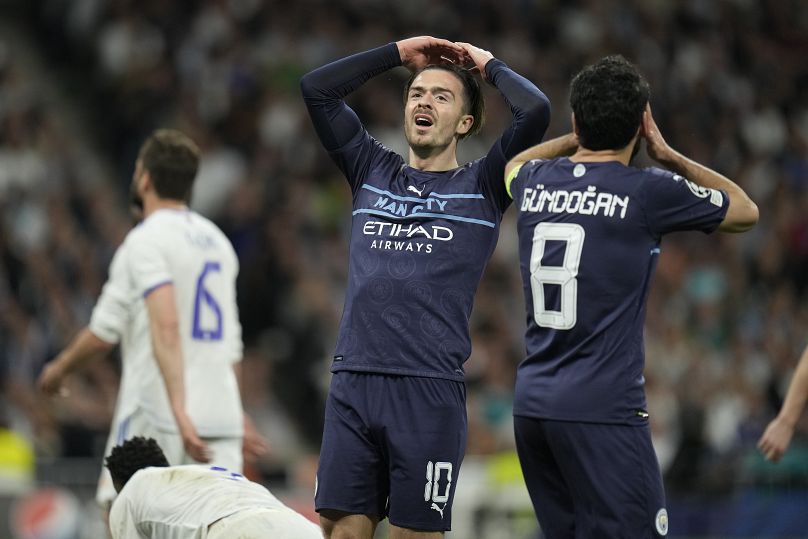 “We were close but, at the end, we could not reach (the final),” Guardiola said.

A few minutes before Rodrygo’s first goal, Ferland Mendy had saved Madrid from conceding a second goal that could have sealed City’s qualification by clearing the ball off the goal line while tumbling backwards to keep an attempt by Jack Grealish from going in.

Madrid goalkeeper Thibaut Courtois moments later saved a Grealish shot with the bottom of his cleat.

Madrid looked defeated near the end of regulation before Rodrygo scored his goals two minutes apart. Riyad Mahrez had put City ahead in the 73rd but the Brazilian forward equalized in the 90th and got the go-ahead goal with a header a minute into stoppage time.

“Yeah, we were close,” said Guardiola. So before the first goal (for Real Madrid), we had two chances, especially one so clear with Jack (Grealish)… and in that moment we didn’t have the feeling that we were in trouble for the way they attack(ed). (It) Didn’t happen. So they score a goal at the end, and yeah, they have done it many times in (their) history.

“I had defeats in (the) Champions League. Always I had defeats so tough, Barcelona against Chelsea, when both games were exceptional and we could not reach the final. And… yeah, it’s tough for us, so we cannot deny it.

“We didn’t play much good in the first half. We didn’t find our game, but it’s normal. In this competition it’s normal. And the second half was much better. Much, much better. And he had, after the goal… yeah, we control(led it). When we found the game, we arrived at the byline. Jack (Grealish) helped us to control the game. Yet unfortunately, we could not finish when we were close.”

The initiative harnessing the power of sport to change…

‘I couldn’t save my brother from suicide –…