Climate change: Global warming ‘could reach 4C by end of this century’ after COP26 fell short of its aims, say experts

There could be global warming of 4C by the end of this century despite pledges made at the COP26 climate summit, according to a new report.

Researchers from the University of Exeter and the Met Office analysed worldwide policies and found that on the “current trajectory” the Paris Agreement‘s aim of limiting warming to 1.5C above pre-industrial levels is slipping out of reach.

Professor Richard Betts, who led the research, said the agreements made at COP26 in Glasgow “have reduced the likelihood” of warming reaching 4C “but it remains possible”. 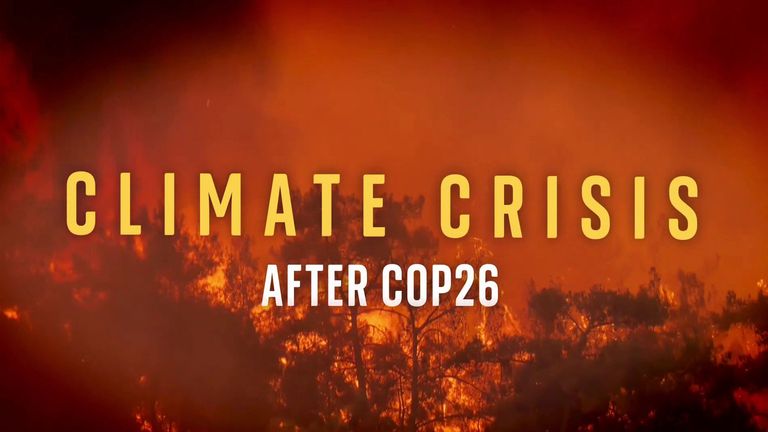 All of these risks would increase if warming reaches 2C – and even more so at 4C.

“Projections consistent with policies currently in place worldwide imply warming of between approximately 2C and 5C by the end of this century depending on the rate of greenhouse gas emissions and the response of the climate system to these emissions,” the report states.

“This will further increase the shifts in weather patterns and extremes, further increasing risks to people and biodiversity, with higher warming leading to greater risks.

“Limiting warming to lower levels may still be achievable if global emissions are rapidly reduced to net zero or net negative, but even if global warming is successfully limited to between 1.5 and 2C, weather patterns will still be different to those in recent decades, and sea levels will continue to rise to some extent.”

The report calls for the UK to take more action to prepare for these impacts.

:: Subscribe to ClimateCast on Spotify, Apple Podcasts, or Spreaker.

Prof Betts said: “COP26 fell short of its aims, and it is becoming less likely that we will be able limit global warming to low levels.

“The Paris Agreement’s 1.5C goal is slipping out of reach.

“We need to be better prepared for the climate changes we have already caused.”

The stark warning contained within the third UK Climate Change Risk Assessment to parliament will alarm the politicians it is intended for.

It lays bare that the UK needs to be much better prepared for the consequences of the climate change that is already under way, let alone the dire scenario in which global warming hits 4C above pre-industrial levels.

According to the report, more action is needed to protect from and adapt to the threat posed to people, infrastructure, homes and businesses by the rising waters, severe weather events and increased heat that climate change is already delivering.

This is going to be expensive. Very expensive. And it is not clear how the government or anyone else might fully meet those costs.

In addition to whatever is to be spent on adaptation, the UK is already struggling to work out how to pay for getting to net zero carbon emissions by 2050.

It is an emerging fault-line within the Conservative party because of the potential expense to households, particularly when it comes to the decarbonisation of home heating.

More broadly, this report illustrates a growing problem in the global north which has long been known by climate-vulnerable nations in the global south – that spending on adaptation measures must run alongside the effort to reduce carbon emissions – a double whammy of eye watering climate change costs, both of which must be met if we are to avoid what is often described as the terrible cost of doing nothing.