Ministers and negotiators at COP26 must “pull together and drive for the line” in the second week of the conference, Boris Johnson says.

Honeybees use social distancing when hive is under threat…

The prime minister was talking as the first week of the climate summit in Glasgow comes to an end, with Saturday marked by the biggest protests to date, and representatives prepare for a second and final week of talks.

COP26: Saturday’s events as they happened

Mr Johnson said: “There is one week left for COP26 to deliver for the world, and we must all pull together and drive for the line.

“We have seen nations bring ambition and action to help limit rising temperatures, with new pledges to cut carbon and methane emissions, end deforestation, phase out coal and provide more finance to countries most vulnerable to climate change.

“But we cannot underestimate the task at hand to keep 1.5C alive.

“Countries must come back to the table this week ready to make the bold compromises and ambitious commitments needed.”

Despite the pledges to end deforestation, fossil fuel funding abroad, use of coal, and the greenhouse gas methane, there have been protests from those who say more is needed.

On Friday and Saturday, tens of thousands of protesters marched in Glasgow calling for action rather than just more of what activist Greta Thunberg has described as “blah blah blah”. 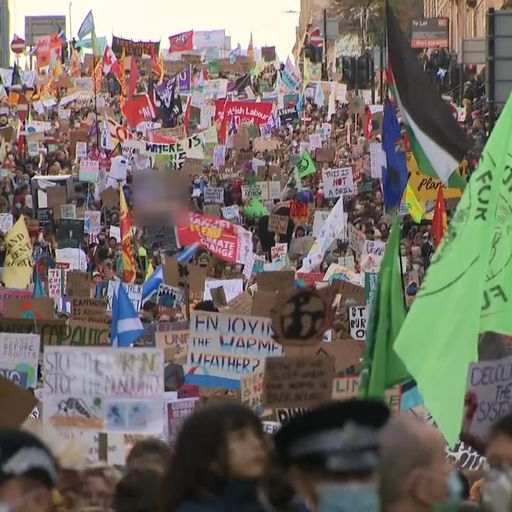 Organisers of the protests, the COP26 Coalition, claimed more than 100,000 people turned up to Saturday’s protest, despite the weather, adding that an estimated 300 similar events were taking place around the world.

The second week is expected to discuss parts of the 2015 Paris Agreement which still need finalising, markets for trading carbon emissions, transparency over what countries are doing and timeframes for action.

Talks will also continue on how poorer countries can be helped to adapt to the changing climate and what that will mean for people, land, livelihoods, and infrastructure.

Countries will also try to set out a plan for how they will close the gap between what they have pledged under the Paris Agreement and what is needed to avoid temperature rises of more than 1.5C. Some countries are pushing for commitments to be revisited and boosted every year, but there is also some opposition to this.

Ed Miliband, Labour’s shadow business secretary, said: “The truth after the first week of the COP is that we remain a long way off where we need to be to realistically say we have taken the major steps required to keep 1.5 alive.

“But all the prime minister now offers is empty exhortation and commentary.

“We have a right to expect him to engage directly in these final days, personally driving these negotiations forward, pushing all the major emitters to do more, delivering the finance required for developing and vulnerable countries and ensuring we have a path out of Glasgow to keep 1.5 alive.

“He needs to step up with focus, clarity and urgency in the face of the massive task the world faces in the coming days.”

Energy crisis: Chancellor appears to rule out helping businesses with…