Austria is placing millions of people not fully vaccinated against COVID-19 in lockdown as of today as Europe becomes the epicentre of the pandemic once again.

Anyone over the age of 12 who has not been double-jabbed is now only allowed to leave their homes for work, school, exercise and buying essential supplies – with the lockdown affecting about two million of Austria‘s 8.9 million population.

The revived restrictions came into force at midnight on Sunday and will last for 10 days before being reviewed. 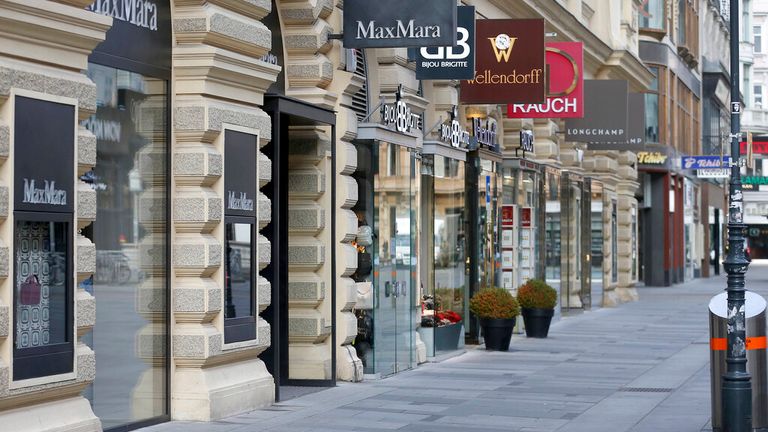 The country’s health minister said further measures are being considered, including a 10pm night-time curfew for everyone regardless of their vaccination status.

Wolfgang Mückstein said a decision would be made on Wednesday, adding: “We’re all in the same boat.”

Mr Mückstein also justified the new lockdown because of the “dramatic situation” in Austria’s ICUs.

Europe is now accounting for more than half of the average seven-day cases worldwide and around half of latest deaths – the highest levels since April last year when COVID-19 was at its initial peak in Italy.

Governments across Europe are concerned that enforcing fresh measures will derail a fragile economic recovery as other countries including the Netherlands, Germany and the Czech Republic taking or planning measures to curb the spread.

Austria has one of the lowest vaccination rates in western Europe, with only around 65% of the total population fully vaccinated.

The country has faced a worrying trend in infections in recent weeks – reporting 11,552 new cases on Sunday, while a week ago there were 8,554 new infections.

The seven-day infection rate is currently 775.5 new cases per 100,000 inhabitants, while neighbouring Germany, which has already sounded the alarm over rising numbers, has a rate of 289 in comparison.

In the Netherlands, 15 people were arrested after protests broke out over a three-week partial coronavirus lockdown that was imposed on Saturday night due to a spike in infections. Caretaker Dutch Prime Minister Mark Rutte had earlier said his government wants to “deliver a hard blow to the virus” as bars, restaurants and supermarkets will be ordered to close at 8pm and professional sports matches will be played in empty stadiums.

In eastern Europe, Romania and Bulgaria have reported record numbers of daily coronavirus infections. Case rates have increased by more than tenfold in two months to the end of October, when some restrictions were reimposed.

Daily case rates in the UK have also risen to around 70 cases for every 100,000 people and have remained there for much of the summer.

British Prime Minister Boris Johnson described the fresh concerns as “storm clouds” of a new coronavirus wave are gathering over Europe on Friday and urged Britons to get their booster jabs.

According to The Times, the UK government is poised to extend the COVID-19 booster programme to people under the age of 50 to drive down transmission rates as winter approaches.

The Joint Committee on Vaccination and Immunisation (JCVI) is expected to give its approval on Monday on the move to extend the rollout, with the newspaper adding that the precise details of the age groups have not been confirmed.

More than two million people in England received their COVID-19 booster in the past week, with health officials describing the numbers as record-breaking. COVID-19 UK daily tracker: What is the state of the pandemic near you?

And at least one million 12 to 15-year-olds have now had a COVID vaccine in England, with jabs for this group beginning on 20 September.

Professor Neil Ferguson, a member of the Scientific Advisory Group for Emergencies (SAGE), said with high levels of COVID immunity and a strong booster vaccination programme, the UK is “unlikely” to experience a “catastrophic winter wave” of infections that would require a Christmas lockdown similar to last year.

Acknowledging however that the UK is seeing a “hint of an uptick in the last few days” following weeks of declining case numbers and hospital admissions, he told the BBC’s Today programme: “We’ve had very high case numbers – between 30,000 and 50,000 a day – really for the last four months, since the beginning of July.

“That has obviously had some downsides.

“It has also paradoxically had an upside of boosting the immunity of the population compared with countries like Germany, the Netherlands and France, which have had much lower case numbers and are only now seeing an uptick.” Wales is dealing with a high level of virus across the country by requiring COVID passes on entry of cinemas, theatres and concert halls in a bid to bring cases under control.

Dawn Bowden, deputy minister for arts and sport, said the measures “will help keep these businesses open during the difficult autumn and winter months ahead”.

The Welsh government said the guidance on self-isolation had also been changed and people are being encouraged to work from home to help tackle the rising cases.

Meanwhile, Israel has announced that a campaign to vaccinate some 1.2 million children aged five to 11 will begin within days.

The decision to green light jabs for children in this age group was announced by the health ministry on Sunday, following an agreement by a panel of experts.

It comes after US health officials granted the vaccine safe for the same age group earlier this month.

Central and eastern European governments have had to take drastic action with fresh measures as they struggle to ramp up vaccine uptake.

Latvia, one of the least vaccinated countries in the EU, introduced a four-week lockdown in mid-October. On Friday, its parliament voted to ban ministers who refuse vaccination from voting on laws and participating in discussions.

The Czech Republic, Slovakia and Russia have also tightened restrictions.

People Just Do Nothing’s Allan Mustafa and Hugo Chegwin on the climate crisis: ‘We don’t have to all be Greta Thunberg’s level – but we can make small changes’

While an unemployment crisis may have been averted, the vacancies crisis remains