COVID-19: Sorry seems to be the hardest word for ministers even after damning report into pandemic

“Keen to start with an apology, minister?” “Well, no…”

Hong Kong protests: When home lies in ruins and neighbour…

Bitcoin’s record price will be good news for some, but…

And thus began the government’s response this morning to the first major inquiry into the lessons the UK should learn from COVID, which is damning on several fronts.

Cabinet office minister Steve Barclay, who was not at the centre of decision-making when the pandemic struck and conceded he had not read the 150-page report, refused 11 times to apologise for its findings.

Overseen by two senior Tories, Jeremy Hunt and Greg Clark, it is scathing on the failure to lock down earlier in March – “one of the worst public health failures the UK has ever experienced”; on care homes – which the MPs say neither the government, nor SAGE nor even the NHS took seriously enough with “devastating” consequences; and on woeful pandemic preparedness, among others.

Analysis – Massive mistakes were made in COVID response
COVID crisis: Are care homes now safer?
The pandemic year – what was happening behind the scenes

Thousands of deaths were preventable, the report says. Although the 100,000 tests target and the pioneering vaccine programme are highly praised.

Mr Barclay, who has the supply chain crisis in his in-tray, said the government was committed to learning lessons and would examine the report ahead of the public inquiry the prime minister has promised next spring. 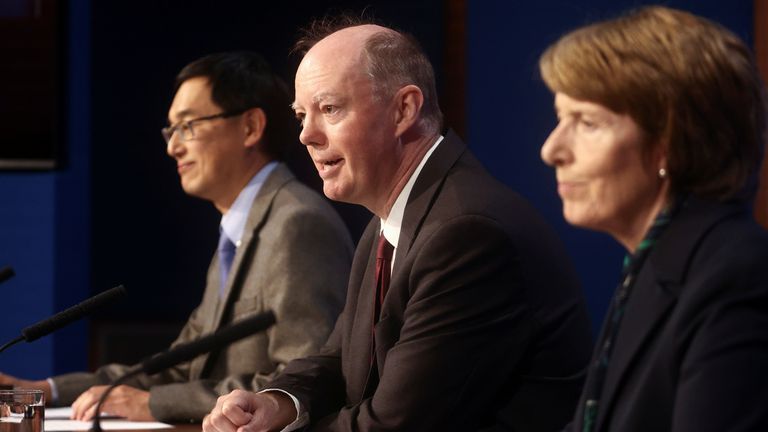 It was a defensive response given that in May (following Dominic Cummings explosive testimony to this inquiry) Boris Johnson went further than before in saying he was “truly sorry for the suffering that the people of this country have experienced”.

He told MPs “I take full responsibility for everything that has happened.”

Labour says that an inquiry should be held now, and on whether they should have more aggressively pressed for lockdown, it says the government had all the scientific data.

Today’s report by MPs covers a lot of familiar ground and does not point the finger at individuals, going instead for system failings.

But it’s striking that amid government insistence they “followed the science”, the MPs say ministers should in fact have challenged it, particularly when it came to herd immunity – which the report says was the “inevitable outcome” of the government’s early strategy, although Number 10 has consistently denied this was the case.

The prime minister promised the public inquiry, which will also focus on some of the different decisions taken by the devolved governments, will consider “all key aspects of the UK response”.

We’re starting to see what those battle lines will be, but six months is a long time and by then we will have a clearer idea if we are looking at a pandemic on the wane or one that is still very much in our lives.

Sound of Moosic: Swiss cows airlifted off mountain pastures ahead of annual parade