COVID-positive woman self-isolates in plane loo for five hours to protect other passengers , and posts her ordeal on TikTok

A woman who tested positive for COVID during a transatlantic flight self-isolated for five hours in the plane’s toilet to protect other passengers.

Michigan schoolteacher Marisa Fotieo was travelling from Chicago to Reykjavik, Iceland on 20 December when her throat began to hurt.

She took a rapid COVID test she was carrying with her and within “what felt like two seconds there were two lines”.

Ms Fotieo decided that to protect the other 150 passengers and crew on the Icelandair flight she would lock herself away in one of the toilets for the remainder of the journey.

And she captured her experience of confinement in the tiny loo in a TikTok video that has been viewed more than three million times.

“Shout out to @Icelandair for my VIP quarantine quarters,” she wrote.

Speaking to NBC News’ Steve Patterson, she described it as a “crazy experience”.

She told him: “I just took my rapid test and I brought it into the bathroom, and within what felt like two seconds there were two lines.”

“There’s 150 people on the flight, and my biggest fear was giving it to them,” she added.

She said the self-isolation was made bearable because of the care of flight attendant Ragnhildur “Rocky” Eiríksdóttir.

“She made sure I had everything I needed for the next five hours from food to drinks and constantly checked on me assuring me I would be all right,” Marisa wrote in an email to NBC News. 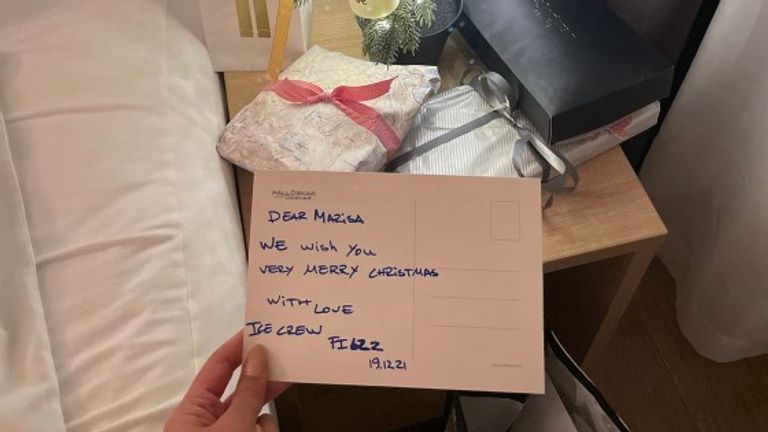 After arriving in Reykjavik, she had to quarantine in a hotel, but said said that even then Eiríksdóttir’s kindness didn’t end.

“She bought me flowers and a little Christmas tree with lights so I could hang it,” Fotieo told Patterson. “It was so heartfelt, and she’s just an angel.”

Prince Andrew: Trial looms for the Duke of York as judge’s ruling puts any hope of reputation rebuild on ice

Boris Johnson no-show: A PM running scared or the victim of a stitch-up?

Men with higher testosterone likely to have more than one sexual…