Davos 2022: What to expect from the World Economic Forum’s most consequential meeting in 50 years

Attendees of the World Economic Forum in Davos are greeted by sunshine and green landscapes instead of snow this year.

Eschewing the typical snowy alpine scenes that usually form the backdrop to the annual World Economic Forum (WEF) meeting in Davos, delegates and visitors to the 2022 event are instead being greeted by green mountainscapes and warm sunshine (for the most part).

The WEF 2022 is meeting in springtime rather than January – when it is traditionally held – for the first time, having been postponed on multiple occasions by COVID-19.

Besides the novelty that the change of season brings, the WEF is meeting at a crucial time.

In its 50-year history, the WEF has never been confronted with such unprecedented global issues as it now faces in 2022, as the world recovers from a global pandemic, grapples to contain the devastating impact of the climate crisis, and navigates a geopolitical storm following the invasion of Ukraine.

“Davos will be different, but not mainly because of the lack of snow but because of lack of global co-operation to solve these most pressing challenges,” Børge Brende, President of the WEF, said in a pre-event briefing.

Here’s what you can expect to be top of the agenda at this year’s WEF.

The war in Ukraine means that Davos will look a little different this year. Organisers, for instance, have chosen not to extend an invite to Russian companies or representatives in light of sanctions imposed on Vladimir Putin’s regime.

“Mr Putin started the war and he can end it,” Brende said. “By again accepting what he has accepted in the past: the territorial integrity of Ukraine”.

Russia’s absence at one of the most important and exclusive meetings of the global elite has left a noticeable vacuum that is being filled in unexpected ways.

The vacant Russia House, which has been the base for the Russian delegation at the event for years, has now been taken over by a Ukrainian foundation and rechristened the “Russian War Crimes House”.

The venue, which would have hosted events and meetings with Russian delegates, will now play host to an exhibition documenting alleged war crimes committed by Russian troops.

When it officially opens on Monday, it will be a visceral reminder of the ongoing war away from the panels and discussions being held at nearby WEF venues.

Ukrainian delegates will feature heavily in the event’s programming this year, with President Volodymyr Zelenskyy set to address the event via a livestream on Monday. Mayor of Kyiv, Vitali Klitschko, is also expected to be in Davos in person.

The climate crisis is always one of the top talking points at the WEF and this is not set to change in 2022.

There is always significant pushback against organisers, with the fact that so many attendees arrive in Davos by way of private jet being one of the more vocal criticisms of the event’s eco-credentials.

Greenpeace and other environmental NGOs always have a presence at the event and in 2019, teenage climate activist Greta Thunberg notably held her weekly School Strike climate protest with local youth.

In the days leading up to the 2022 event, climate activists staged an anti-WEF protest on the streets of Zurich. 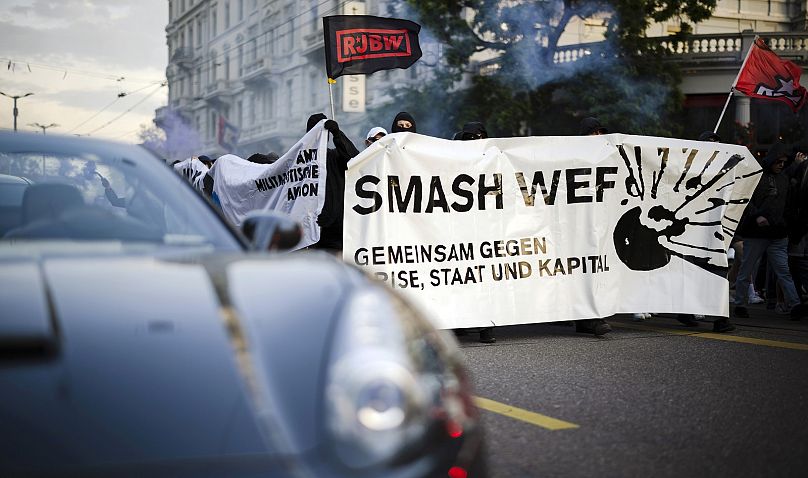 Protesters walk with a banner reading “Smash WEF” past a sports car during a demonstration against the World Economic Forum (WEF) in Zurich, Switzerland, Friday, May 20, 2022.Michael Buholzer/Keystone via AP

This year, however, climate will no longer be the elephant in the room.

In the past year alone, the world has broken several grim climate milestones: the last seven years were the hottest on record with extreme heatwaves noted across the Mediterranean and western America. Western Europe also experienced its worst-ever flooding while rainfall was recorded for the first time at a summit station.

COVID is still a presence

For now, Europe has largely put the pandemic behind it as countries across the continent open up and ease or remove most if not all of their COVID-19 restrictions.

Here in Davos, though, coronavirus is a palpable presence. Participants, delegates and media all have to provide evidence of vaccination, a negative PCR prior to arrival and a second COVID-19 test on site. Those without this documentation are not allowed within the secure perimeter.

After going virtual in January 2021 with an in-person meeting in Singapore later in the year also shelved, the scheduled January event was postponed yet again in 2022 due to the spread of the Omicron variant.

Now that the 2022 session is meeting in person, discussions will no doubt turn to humanity’s preparedness for future events with potential announcements on vaccine equity and how best to monitor the potential for future pandemics.

The resilience of the global economy to weather such an event will also be a hot topic for discussion.

Live: No ceasefire or concessions, Ukraine said, as fighting in Donbas intensifies

Eurovision: The public’s choice and the political lesson that comes with it

Queen misses Remembrance Sunday service after spraining her back…