‘Demoralising and scary’: Women in UK react to US reversal of abortion rights

Demonstrators hold placards as they attend a march in support of the Abortion Rights group, in London.

From Olivia Rodrigo to Lily Allen, Kendrick Lamar to Billie Eilish, musicians and artists at Glastonbury, devastated and furious, condemned the US Supreme Court’s controversial reversal of Roe v Wade – a 1973 court case that granted US women a constitutional right to abortion.

While abortion is legal in the UK, some women are now concerned about the potential impact of the US decision on abortion rights in Europe.

“Time will tell,” says artist and history student Elise Batchelor, 19, raised in Brussels and London, overwhelmed by recent events as she tries to navigate her next steps as a university student in Cambridge.

The emotional blow, though, has been clear. “It’s demoralising and scary for the women in my life and me,” Batchelor adds.

She says that the US Supreme Court’s decision is about controlling women through their reproductive rights and refusing them the right to bodily autonomy.

“It is a powerful and painful example of the deep-rooted patriarchal society in the US,” Batchelor said.

In the UK, American anti-abortion groups are influencing protests and harassing women outside abortion clinics. They are using the overturning of the case to build support, experts and pro-choice advocates say.

Stella Creasy, Labour MP for Walthamstow in East London, wrote in British Vogue in June that UK parliamentarians celebrating the reversal of Roe v Wade have made it clear that further attempts to suppress access to abortion, will come.

At the end of last month, 61 Conservative MPs voted against extending abortion access in Northern Ireland, including Jacob Rees-Mogg and several other ministers.

“It is a reminder of the patriarchal society that exists here in the UK and in Europe and how that directly affects me and my peers,” Batchelor said.

“They are already trying to attack our rights in the UK,” warns Kerry Abel, Chair of the UK’s pro-choice campaign Abortion Rights.

“We know that the anti-abortion activists have a global network and are emboldened when they get a win, especially the complete rollback of abortion rights that the overruling of Roe v Wade represents,” Abel said.

“For 50 years the extreme right have said this is what they are going to do and now they have done it.”

When Hillary Clinton warned about a threat to abortion rights before Donald Trump was elected, she was ridiculed, humiliated and degraded. Former US President Barack Obama was so confident there would be no threat to the rights, so he did nothing, just like Biden, Olivarius said.

So there should be no surprise here, said Olivarius, adding, “In the UK, I hear people say it could never happen over here just like we said in the US.”

In most circumstances, the 1967 Abortion Act made pregnancy terminations legal in Great Britain for up to 24 weeks. However, it did not extend to Northern Ireland.

Live: Kyiv and other cities hit by missile strikes during UN… 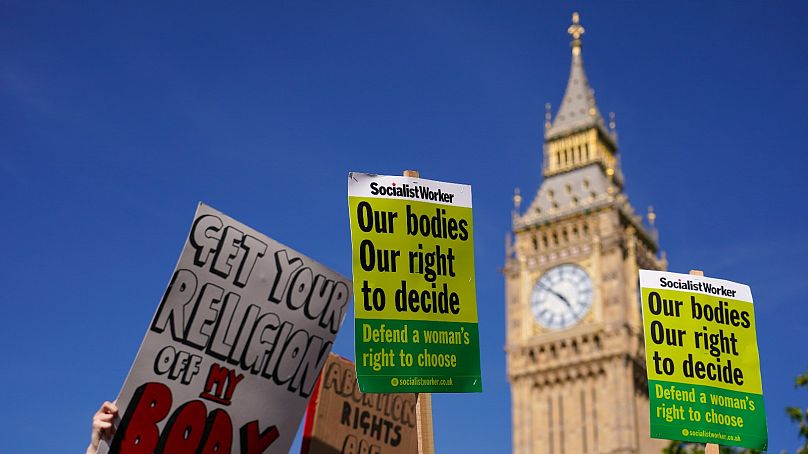 Demonstrators hold placards as they attend a march in support of the Abortion Rights group, in London, Saturday, July 9, 2022.AP Photo/Alberto Pezzali

Abortion is still criminalised in the UK

The problem with abortion in the UK and the danger is that it is not hard to come by. But women have no right to make informed decisions about their reproduction, Olivarius said.

Ideally, Abel believes abortion should be a human right. Instead, it still sits in the criminal code in Victorian-dated legislation from 1861.

While the Abortion Act of 1967 was designed to protect women’s health, it did not decriminalise abortion in England and Wales. It simply said medical practitioners would not be guilty of a crime if they performed the abortion according to certain criteria, Olivarius said.

To have an abortion in England, Wales and Scotland, two doctors must agree that pregnancy poses a grave injury to the mother’s physical and mental health, she added.

Only Northern Ireland has decriminalised abortion since October 2019 but it is only permitted in the first 12 weeks of pregnancy.

The European Union’s parliament overwhelmingly called for safeguards to be enshrined in the EU’s fundamental rights charter following the US decision.

In a 324-155 vote with 38 abstentions, European Parliament lawmakers adopted a resolution that crystallised the anger seen in many of the EU’s 27 member countries since the US Supreme Court handed down its ruling on June 24.

“It teaches us a lesson: Women’s and girls’ human rights can never be taken for granted, and we must always fight to defend them,” Swedish politician Helene Fritzon, vice president of the parliamentary alliance of Socialists and Democrats, said.

Abortion is not a woman’s issue, it is everyone’s issue

Abel said that working-class women are disproportionately affected. She is urging employers to step up and reduce the stigma and allow women and pregnant people time to make their appointments, without losing their shift payments or having to book excess childcare.

“There is still a postcode lottery and women are still travelling for treatment or facing harassment outside clinics and this is unacceptable,” Abel says.

The profiles of women who have abortions in this country, Olivarius emphasises are married women, women in long-term relations who already have a child. They come to a decision with their partner about the lack of resources and that is 61 per cent of the population.

A survey carried out by the charity Pregnant Then Screwed on 1,630 women in the past five years found that 60.5 per cent said that the childcare costs in the UK influenced their decision to terminate a pregnancy.

Creasy, who has been vocal about abortion rights in the UK for years, and was targeted by an anti-abortion group, said on Twitter she will table an amendment to the British Bill of Rights to guarantee women’s right to an abortion.

Olivarius would like to see the abortion act upgraded to Abortion Act 2023 where women can walk into a surgery and get an abortion without having to prove a mental health issue, rape, sexual assault etc.

“It is not just a women’s issue, it really is everyone’s issue,” she added.

She is calling for more women to speak up, become actively engaged in debates and protests on abortion rights and publicise their positive stories on abortion.

A research revolution: science, genes, and sport in Qatar

Europe’s energy crisis and the Netherlands’…