Spain's main aim was to decouple the prices of energy and electricity.

Once again, EU leaders have dismissed Spain’s impassioned pleas for market reform to curb the dramatic rise of electricity prices across the continent.

The politically explosive issue has been on the agenda for the past six months and took a turn for the worse after Russia, the bloc’s main gas supplier, invaded Ukraine, sending markets trembling and inflation soaring.

The vastly different energy mixes of each member state and clashing views about market intervention put the brakes on Madrid’s vigorous reforming campaign, whose divisive character laid the ground for a long and intense debate on Friday.

The meeting on energy occupied the entire second day of a EU summit in Brussels and lasted for more than nine hours, with several breaks in between.

At the end of talks, the 27 agreed to allow Spain and Portugal to introduce exceptional and temporary measures in the Iberian market, such as price caps, an instrument that, while extraordinary, falls short of the market reforms that Madrid had been pleading for.

Leaders also gave the go-ahead to a proposal from the European Commission to set up a task force for common purchases of gas ahead of next winter, following the model of the joint procurement scheme for COVID-19 vaccines.

The bloc is confident it can use its weight as an economic powerhouse to secure more favourable prices. Europe’s gas consumption represents 75% of global market of pipeline gas.

“We have an enormous purchasing power. Therefore I welcome that we will now use our collective bargaining power,” said Commission President Ursula von der Leyen at the end of the meeting.

“Instead of outbidding each other and driving prices up, we will pool our demand.”

Additionally, leaders green-lighted the objective to fill up underground gas storage facilities by at least 80% of their capacity by 1 November in order to avoid a repeat of last year’s low reserves.

From Angola to the US: Which countries can wean Europe off Russian gas?What can World War Two teach us about tackling the 2022 energy crisis?

At the same time, gasoline prices have experienced a steep rise, surpassing €2 per litre in several European countries. The ballooning costs have strained households and companies, with some factories shutting down production to mitigate the impact of the impossibly high bills.

In Spain, one of the country worst hit by the crisis, the transport sector began an indefinite strike on March 14 to protest the state of near “bankruptcy” of its employees. The strike has disrupted the country and many supermarkets are running out of food supplies.

Under enormous popular pressure, Spanish Prime Minister Pedro Sánchez arrived in Brussels to secure concessions from his peers that would tweak the existing rules of the EU energy market. Among his priorities, Sánchez wanted to “decouple” the prices of energy and electricity.

Today, the EU’s wholesale electricity market works on the basis of marginal pricing, also known as “pay-as-clear market”. Under this system, all electricity producers – from fossils fuels to wind and solar – bid into the market and offer energy according to their production costs. The bidding starts from the cheapest resources – the renewables – and finish with the most expensive one – usually natural gas. 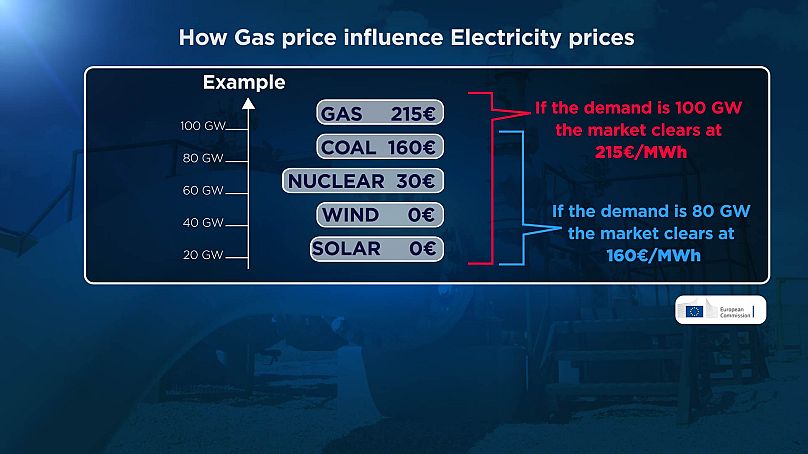 Sánchez believes this system has become “problematic” and is causing a contagion effect. Since most EU countries still rely on fossil fuels to meet all their power demands, the final price of electricity is often set by the price of coal or natural gas. If gas becomes more expensive, electricity bills inevitably go up, even if clean, cheaper sources also contribute to the total energy supply.

Spain’s campaign for a hands-on approach has received the backing of Greece, Portugal, Italy and, most recently, Belgium.

“The impact of the Ukraine war, we feel it in Europe. It’s out citizens who feel it,” said Alexander De Croo, the prime minister of Belgium, who hails from a liberal party.

“The prices today have nothing to do with reality, which are ruining our population and ruining our public finances. I think we should intervene. I know that intervening in the market is not an easy thing to do, but we’re at war. I think we can take extraordinary measures.”

But the push for intervention is not widely shared.

In fact, it is adamantly opposed by countries like Germany, the Netherlands, Denmark and Austria, who defend the current system because it guarantees transparency and promotes investment in the cleaner resources.

In the leading-up the summit, reports emerged in the Spanish press that a EU diplomat had described Sánchez as Don Quixote fighting against the windmills, with De Croo as his Sancho Panza.

“Everyone is concerned” about high energy prices, said Latvian Prime Minister Krišjānis Kariņš ahead of the summit.

At the end of the day, Sánchez’s great ambitions failed to materialise and his fellow leaders simply granted him and Portugal permission to introduce a temporary remedies to the electricity prices in the Iberian Peninsula.

The Spanish PM has described the region as an “energy island” with a higher-than-average share of renewables but scarce interconnections with the rest of mainland Europe, which in his view makes it easier to implement exceptional measures without endangering the rest of the European market.

“We agreed on a special treatment that is possible for the Iberian Peninsula so that it can deal with this very specific situation they are in and manage electricity prices,” said von der Leyen.

Prices caps was one of the ideas floated by the Commission earlier this week, alongside income support, state aid, reduced taxation and the redistribution of so-called windfall profits.

“There is no single easy answer to tackle high electricity prices,” the executive said in the document. “All options carry costs and drawbacks.”

The burning question is how to pay for these additional costs. For example, if a government sets a maximum price for electricity, it will have to subsidise the gap between the real cost of production and the final bill consumers receive, an effort that can prove onerous in the short team and unstainable in the long.

Price caps might also distort competition, risk trade and even threaten the security of supply, the Commission warned. Fearing losses, gas providers might decide to end contracts and stop selling to the country.

Given Friday’s lacklustre resolution, the debate is poised to continue in the coming weeks. The 27 hope to see a gradual ease of prices as temperatures increase and the use of heating decreases.

“There are some countries that are more market-oriented, others are more sceptical, but this doesn’t have to do with general attitude but with the assessment of what we can achieve,” said German Chancellor Olaf Scholz.

“We don’t have a proposal that works just yet. We see the problem, but not the solution just yet.”

The question of decoupling will come back to the table in May, when the Commission is expected to unveil more ideas on how to avoid the contagion effect. That same month, the executive will also put forward a more detailed roadmap to slash imports of Russian energy by at least two thirds before the end of the year.

Study: Brain fog can persist in younger COVID-19 patients who are not hospitalized

Delicious chocolate treats that make it easy to go vegan…