A police officers stands outside Downing Street during an anti-vaccine protest in London.

Multiple police forces in the UK have denied claims that an investigation has been launched into the country’s vaccination programme.

But authorities in London and Yorkshire have denied any criminal probe being launched.

Global health officials have reiterated that COVID-19 vaccines are safe and effective, and any risks are extremely rare.

Across the UK, several demonstrators have filmed themselves entering hospitals, police stations and vaccine centres. 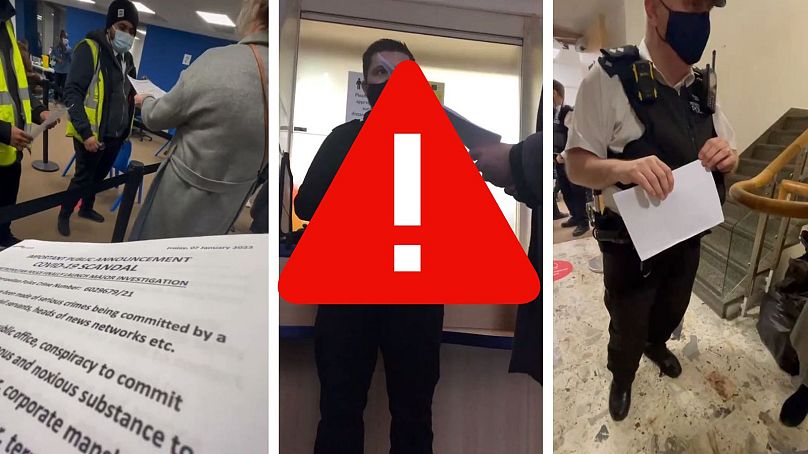 Fake legal documents have been submitted to vaccine centres, hospitals, and police stations.Euronews via Twitter

Once inside, they hand out fake legal documents to force health workers or police in an attempt to shut down vaccination programmes.

These fake legal documents contain a variety of unsubstantiated claims, including unfounded allegations that the UK government has committed “murder” and “war crimes”.

Some of these demonstrators identify themselves as “sovereign citizens” — a movement founded in the United States in the 1970s.

This group believes they have the power to bring politicians and regulators to so-called “common law” justice.

The defunct “laws” they often cite — such as the Magna Carta — are ancient and have no legal standing today.

One misleading allegation focuses on a police case number “60929679/21,” filed by a West London police station.

But multiple social media posts referring to these same digits have been labelled as misleading by Facebook and other platforms.

The Metropolitan Police have repeatedly stated that a routine case number does not mean any investigation has been launched.

“On 20 December, a number of documents were submitted at a west London police station in support of allegations of criminality in relation to the UK’s vaccine programme,” a spokesperson said.

“A crime reference number was created and provided to the complainants. This is not an indication that an investigation is underway or that a crime has been committed, it merely acknowledges that an allegation has been received and recorded,” they added.

“To date, there is nothing to indicate that a crime has been committed and no criminal investigation has been launched.” 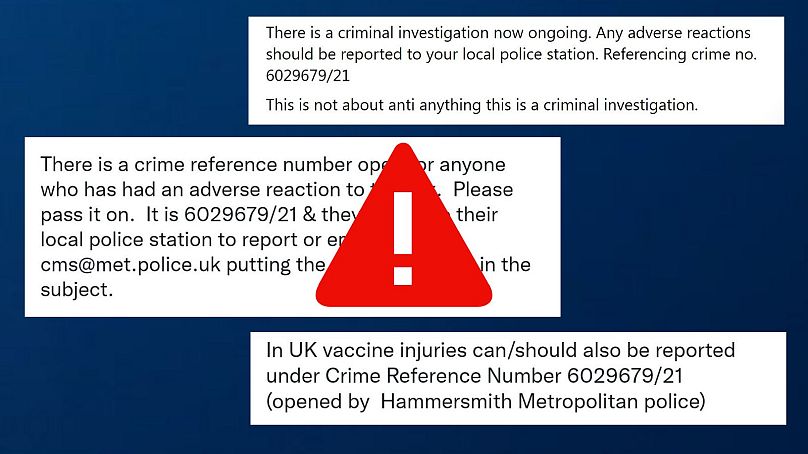 Online posts have referred to the same rutine police case number.Euronews via Twitter/Facebook

Elsewhere in the UK, West Yorkshire Police also told Full Fact that they have not launched any criminal investigation, debunking claims on Facebook.

“Materials were presented to officers at two West Yorkshire Police stations in early 2022 and reference numbers were created,” a spokesperson said.

“No crimes have been recorded however and no criminal enquiries are ongoing by West Yorkshire Police in respect of the vaccination programme.”

“We can state categorically that West Yorkshire Police have no investigations relating to this report or any other alleged criminality relating to the vaccine programme.”

UK police have also stated that online encouragement to submit further alleged “evidence” to them has prolonged their work.

“Any efforts to intimidate, harass, or commit assault against emergency service workers, staff and volunteers will not be tolerated and will be treated and investigated as a criminal matter by police forces,” the Metropolitan Police spokesperson added.

On Monday, opposition Labour Party leader Sir Keir Starmer had to be protected by police after being surrounded and verbally attacked by a group of protesters.

London’s Metropolitan Police said two people, a man and a woman, were arrested following Monday’s incident after a traffic cone was thrown at a police car.

In one of the videos posted online, a man can be heard shouting about the Magna Carta and other far-right conspiracies. Two people have been arrested after the incident, police say.

The Fed is expected to cut rates again amid conflicting economic…