A firefighter at work at a forest fire at La Test-de-Buch, southwestern France, late Monday, July 18, 2022.

The first half of July was a hectic one for the Emergency Response Coordination Centre (ERCC) in Brussels as forest fires season well and truly started in Europe.

The agency, which is part of the EU Civil Protection Mechanism, has already had a heavy workload due to Russia’s war in Ukraine and the continued fight against COVID-19.

But unlike the war in Ukraine or the pandemic, apocalyptic forest fires in Europe are now common occurrences every summer as climate change pushes temperatures to new dizzying heights while nearly half of the bloc is now exposed to “warning” drought levels.

“Since 2017, you have a steep increase in terms of activation of the mechanism for forest fires and not only for Europe but also neighbouring country, Northern Africa. We’ve seen also requests from Georgia etc,” Antoine Lemasson, Head of the EU’s Emergency Response Coordination Centre, told Euronews.

This year’s season, he went on, “is starting high, the same range as last year, which was a difficult one, and we hope that it will not be as bad as it was in 2017, which was a deadly fire season with many accidents, notably in Portugal.”

How the ERCC works

The ERCC was created in 2013 to be the “operational heart” of the EU Civil Protection Mechanism and now counts 33 participating countries including the 27 EU member states as well as Norway, Iceland, Montenegro, North Macedonia, Serbia, and Turkey. 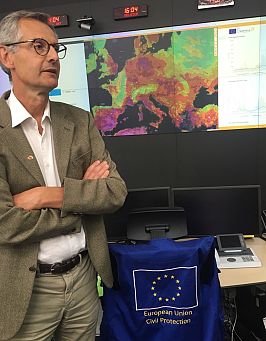 Nowadays, it counts a team of over 25 duty officers and is manned night and day at the Centre’s headquarters in the heart of Brussels’ European quarters. From their control room filled with maps and data from Copernicus, European Union’s Earth observation programme, they coordinate the bloc’s response to disasters.

The ERCC has been activated more than 600 times since its inception to respond to earthquakes and cyclones in far-flung corners of the world, but also to floods and other types of accidents.

It has also been triggered for repatriation such as following the Taliban takeover of Afghanistan or for population displacement events including the massive influx of Ukrainian refugees into the EU and neighbouring countries.

In practice, its help can be requested by any country in the world whose own national emergency resources are overwhelmed by a disaster and need further assistance. Their request is entered into the ERCC system, allowing all the agency’s member states to see what is needed and put in what they can individually contribute.

The ERCC itself does not have any equipment to dispatch but it commands a reserve capacity, known as rescEU, made up of resources member states have pre-committed.

A four-fold increase in fires

When it comes to forest fires, the rescEU reserve is this year made up of 12 firefighting aircraft and one helicopter. These have been loaned by Croatia, France, Greece, Italy, Spain and Sweden but their maintenance cost and fuelling needs are covered by the EU during the season.

Forest fires have, on average, represented 17% of all activations of the centre, accounting for 6.5 activations per year.

Last year, there were nine requests related to forest fires — the largest number in the past decade. It also saw the largest ever number of simultaneous activations.

Overall, it was the second-worst wildfire season in the EU since 2000, with damages inflicted by the blazes only surpassed by 2017, when over one million hectares burned in the EU.

Twenty-two member states were impacted by fires which resulted in a total burnt area of 500,566 hectares in the bloc. Italy was the most severely impacted in the EU with 160,000 hectares razed but actually came second to Turkey where more than 206,000 hectares were decimated by fires.

The statistics so far this year suggest we could be in for a tough one.

BAFTA-winning actor Adam Deacon: ‘I had a breakdown in…

Already more than 515,000 hectares have been burnt across the EU, according to data from the European Forest Fire Information System (EFFIS). That’s about four times the average for the same period from 2006 to 2021 (130,255 ha).

The number of fires has also nearly quadrupled with over 1,900 blazes recorded so far this year, compared to a 2006-2021 average of 520 by this time in the year. 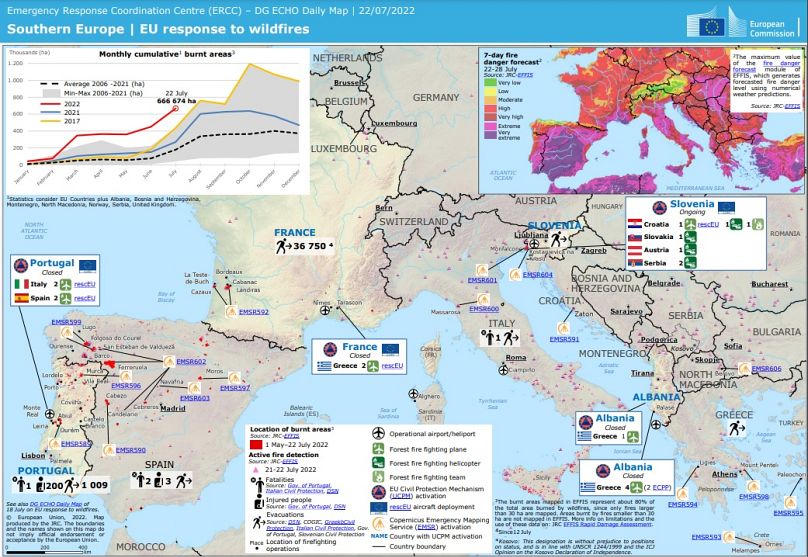 “In Corsica, you have fire in January and February, etc (because) you have vegetation which is very dry, not enough rain during spring, so the situation when you arrive at the beginning of the summer is already very difficult. It’s a pattern and I think we will have to live with that every year now, from now,” he said.

According to EFFIS, the months of March and April were particularly dramatic this year compared to the 2006-2021 average.

This week is offering a bit of respite. Slovenia has indicated it no longer needs European assistance while firefighters in south-western France announced on Monday that the huge fires in Landiras which forced the evacuations of more than 36,000 people have been contained.

But we’re only halfway through the season and Greece, which was the theatre of dramatic scenes last year as people fled flames on the island of Evia has for now held off on requesting European assistance.

Part of the reason is that for the first time ever, the ERCC has pre-positioned 204 firefighters from across the bloc to Greece. The work for this pilot scheme began at the end of the last fire season.

“Greece was really affected heavily. You had a very good response from member states, but still an insufficient one. So what we do is every year, we do a ‘lesson learnt’ (workshop) specifically on the forest fires season. It comes, of course, after the end of the season and based on the lesson learnt, we developed such a programme,” Lemasson explained. 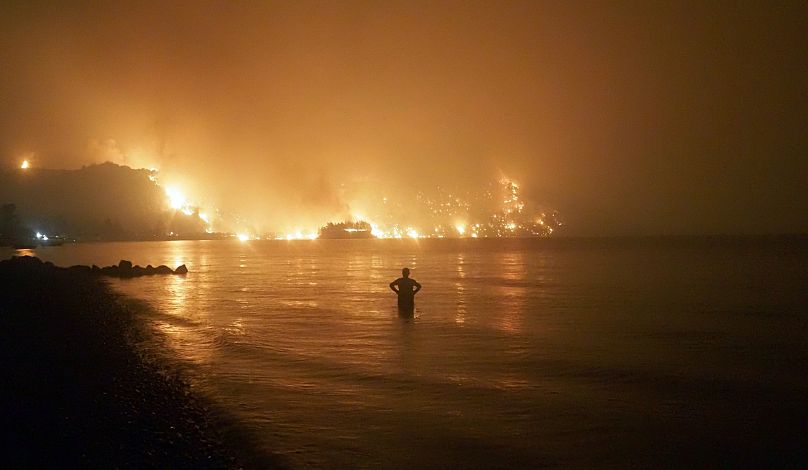 A man watches the flames as wildfire approaches Kochyli beach near Limni village on the Greek island of Evia, Aug. 6, 2021.AP Photo/Thodoris Nikolaou

Major wildfires are now sweeping through large parts of the country.

Greece also accounts for seven of the last 20 activations for Copernicus’ Emergency Management Service over forest fires. Requesting specific mapping from Copernicus to track the extent of a forest fire is often a precursor to an ERCC activation.

Athens has requested Copernicus mapping for the islands of Lesvos, Samos and Crete as well as for fires near Athens, Itea and the Peloponnese, in the south, and Portes, in the north.

But Greece, although it is regularly overwhelmed, has developed strategies to combat forest fires, just like the other Mediterranean countries.

According to the European Environment Agency (EEA), the burnt area in the so-called EUMED 5 — France, Italy, Greece, Portugal and Spain — has slightly decreased since 1980, proving that their control efforts are effective.

A rescEU fleet is coming

Now, Europe must prepare to respond to fires in areas that were until now, largely spared, including in central and northern parts of the continent.

Sweden has requested European assistance to tackle forest fires several times over the past decades and in 2020, the Commission financed the purchase by the Swedish government of two new firefighting aeroplanes.

Brussels is now planning to finance the purchase by member states of more aerial assets and to station them across the bloc. But this will take a few years.

“Since the deadly forest fire in Portugal in 2017, the Commission decided with member states to create these rescEU assets. We hope the first planes will be available in 2026 and at the end of 2029, we should have around 12 aeroplanes which would be able to support our member states,” Lemasson said.

These would come on top of the assets member states already commit to the reserve.

“So I think the only problem is this gap, we need to reach 2026 without too many difficulties and it’s very difficult to forecast,” he concluded.

Monkeypox: What you must know about the virus — and how to protect yourself

EU Parliament calls for Serbia to change its stance on Russia

Cannabis users are at greater risk for emergency and inpatient care:…