A traveller stands on a platform as a suburban train arrives at the main train station in Berlin, Germany, Wednesday, June 1, 2022

While most Germans likely thought they were just living their lives, every weekend getaway, every metro journey to work, every bus ride to the store, and every train trip to a lake to beat this summer’s unprecedented heat was one small part of a gigantic experiment: Germany’s €9 train ticket.

Designed to offer relief against rising inflation and encourage sustainable travel, it allowed unlimited use of local and regional transport throughout the country.

The June-August programme, which did not include high-speed rail lines, proved incredibly popular. Over three months, 52 million tickets were sold, according to Germany’s association of public transit companies (VDV).

So, given its scope, how did the experiment change Germany?

1. Public transport was accessible to everyone

Rail travel in Germany has become quite expensive, often prohibitively so. Deutsche Bahn (DB), Germany’s national rail provider, offers regional rail day passes at the state-wide level starting at €22. These are only good if you stay within one state, while national day passes start at €42.

For those not planning a single day packed with travel, individual regional rail trips are typically more expensive than the passes. Germany’s high-speed “ICE” trains cost even more.

These prices make rail travel unobtainable for many.

Yet for a few months, public transport was opened up to a population much more representative of the whole public.

“With the €9 ticket, for many families going on a weekend getaway suddenly became a real possibility. Simply hopping on the train on a Saturday and taking a ride,” Moritz Ehl told Euronews.

Ehl is a coordinator at Mobility for All, an organisation in the state of Rhineland-Palatinate that pushes for more accessible transport.

“Families, retirees, and people living in poverty all suddenly had new opportunities for their leisure time, along with the ability to fully participate in society,” said Ehl.

The programme didn’t just make a rare holiday possible for many struggling with poverty, it eased the financial pressure of everyday life.

As of 2022, the estimate only allows for €39.01 a month for all transportation expenses. The average cost of a monthly local rail pass in German cities is €80.60.

“That means you can maybe take a couple of single rides, but every time you need to really think about whether you can afford the ride. Whether it’s to the doctor, to go shopping, or even to work… All of that is unrealistic for just [€39],” said Ehl.

Given that even local public transit is out of reach for so many in Germany, it’s no wonder then that Berlin’s local transport authority reported a 14% increase in ticket sales from May 2022. 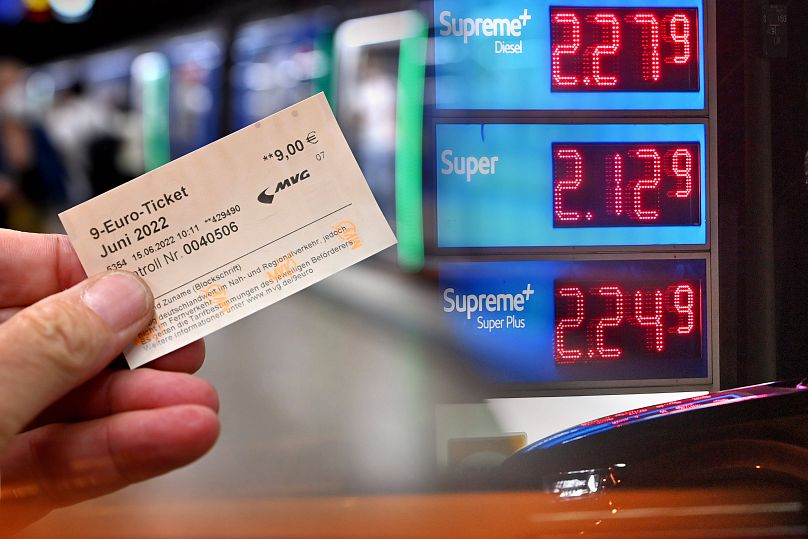 2. Some Germans gave up their cars

The €9 ticket initiative was introduced as part of a larger inflation-relief programme, but it also clearly had climate-related goals as well.

Boosting public transport usage and encouraging drivers to leave their cars at home and hop on trains — not an easy task in car-loving Germany — was a key goal.

“Looking at some of the studies that are already out there, it’s not just people that already use public transport [that bought the tickets], there are new users as well,” said Dr Eva Heinen, a transport researcher at the Technical University of Dortmund, told Euronews. “Overall, you also see a reduction of car use during the programme,”

According to VDV, 10% of the €9 ticket trips replaced vehicle use. They estimate this prevented roughly 1.8 million tonnes of CO2 from entering the atmosphere.

Dr Heinen, who is working on a study of the programme’s impact, expects further, independent studies to come in within the next few months.

While Dr Heinen argues that rural communities, often poorly-served by public transport, did not benefit as greatly from the programme as urban regions, its broader disruptive nature cannot be discounted.

“You can’t underestimate the effect of breaking habits or building new habits,” she said. “People will not just suddenly wake up and think ‘you know what, I think I’m going to change’. You need to trigger this sometimes.”

While it’s clear there will be a follow-up to the €9 ticket, it was not immediately introduced at either the national or regional level. Dr Heinen expressed concern that this delay might be just long enough to break some newly-developed green transport habits. 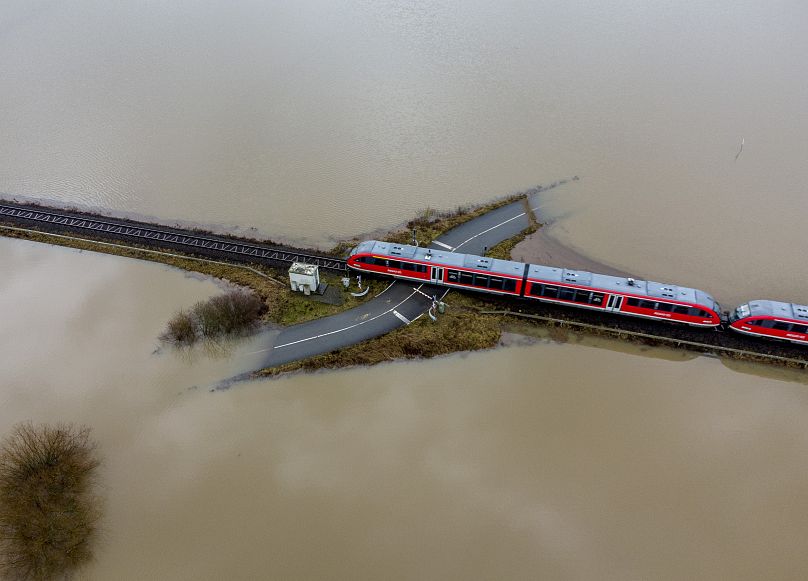 A train passes a railroad crossing surrounded by floodwaters from rain and melting snow in Nidderau near Frankfurt, Germany, Wednesday, Feb. 3, 2021Credit: AP

3. Public transport is back on the climate agenda

Whether it’s about massive government subsidies for purchasing or producing electric vehicles, or the unending battle surrounding introducing a speed limit to Germany’s famed autobahn highway system, much of the debate around reducing transport emissions in Germany is centred on cars.

Dr Heinen told Euronews that she’d welcome a shift in focus away from technical innovations in cars towards a push to change larger transport habits.

“I hope it has changed the discourse. Because there’s been a lot of focus on technical improvements. If you want to encourage public transport, subsidising [ticket cost] is definitely one way to go, the other is improving service, which is better in some areas than others,” she said.

Now that the €9 ticket’s extreme popularity has captured the public imagination, and debate about its extension has been ever-present in recent political discourse, mass transport and its role in reducing emissions are at the fore.

Still, Dr Heinen points out that in order to reach its climate goals, Germany might have to do more than simply make public transport more appealing.

“There’s also a lot of offering more choice and hoping that will result in people making the best decision,” she told Euronews.

“I think if you really want to reduce emissions, unfortunately, you need some measures that push people away from the car.” 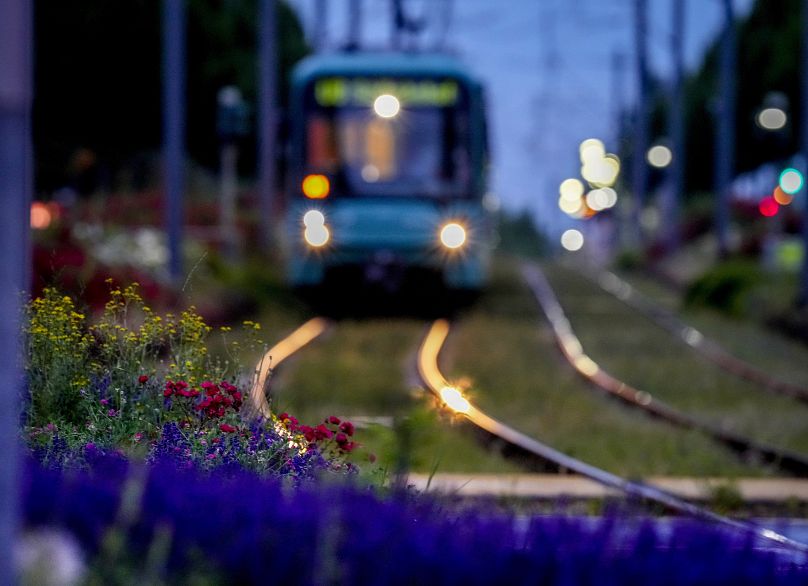 4. Germany can skip bureaucracy when it wants to

Bureaucracy is deeply entrenched in German society and while Kafkaesque quests to find the right stamp for paperwork can be a borderline-comic inconvenience, thick ribbons of red tape can have serious implications on policy implementation.

Ehl has experienced this first-hand at the policy level. When Mobility for All lobbied for a state-wide ticket affordable to recipients of social assistance in Rhineland-Palatinate, even supportive politicians and transport policymakers claimed having one ticket for all five transit authorities in the state was simply unrealistic.

“Then, boom, you get the €9 ticket, which hadn’t even been on the political agenda before,” he told Euronews.

“But it proved that you could have a Germany-wide ticket with just a couple of months of preparation. And it showed what’s possible when the political will is there,” he told Euronews.

For three glorious months, the same, easy-to-order ticket worked everywhere in the country. The time spent staring at transport maps, wondering if you would cross an inner-state border and need an additional ticket, was simply obliterated. It wasn’t just that the ticket was extremely affordable, or that you could take it anywhere. It was also incredibly simple to use.

“I think convenience is an element that hasn’t been discussed as much. It’s not just down to price. If we think about the major aspects that shape why people adopt certain modes of travel, time, effort, and costs are major aspects,” said Dr Heinen.

While the national government mulls a successor initiative, some local governments are introducing their own reduced ticket schemes. Berlin, which is launching a city-wide €29 monthly ticket from October to December to act as a bridge until a national ticket is offered again, will help reduce the financial weight of local travel. But the second that riders leave the ticket’s jurisdiction, they will once again be faced with the headache of sorting another ticket for the same ride.

5. The state can help if the political will is there

Like much of Europe, Germany is facing a cost-of-living crisis, with heating and gas prices spiking just as the country prepares for winter. While German politics in recent decades has often been marked by belt-tightening, highlighted by the introduction of a constitutionally-mandated balanced budget in 2009, the €2.5 billion transport ticket initiative shows Germany is capable of big spending to ease economic pain.

According to a study by the German Economic Institute, a private research institute in Cologne, inflation in Germany would have been 2% higher without the €9 ticket. With a successful model for staving off inflation, Germans know the state can provide help when there is adequate political will.

Rising costs are likely to affect public transport providers as well, only exacerbating the situation.

“A big risk for public transport are rising energy costs. You don’t want to know how big energy bills are for these public transport providers. So there’s the question of who will pay for that,” Dr Heinen said to Euronews.

Der Spiegel has reported Munich’s local transport authority is planning to raise ticket prices by 6.9%, while Deutsche Bahn is contending with €2 billion in rising energy costs and is likely to announce price hikes starting next year.

Those prices may get shunted onto the German state instead of passed down to transit riders. The German government has announced it is planning to bring back a reduced-price, national rail ticket, albeit at a significantly higher price – somewhere between €49 and €69.

“We see anything that encourages public transport use as positive,” he continued. “But we don’t see it as fair if every household, regardless of income, pays the same for a ticket. There are a lot of people who can’t afford a €49 ticket.”

Paying around €60 for a monthly ticket might not feel like a bargain when many have gotten used to the €9 price point. Germans now know that what was once an inconceivably cheap ticket is a real possibility. And with expenses only expected to keep climbing this winter, they also know that the state can help fight inflation when it wants to.

With Spain adopting a free transport programme to close out the year and plenty of other European countries weighing similar initiatives on both the national and local level, it seems other countries have learned from Germany’s €9 ticket experience.

While the lessons from the ambitious experiment are clear, it’s not as obvious just how many of them Germany will heed. That’s what will determine whether millions in Germany took part in a grand, once-in-a-lifetime experiment this summer, or if they helped shape the future of German transport.

Paris terror attacks trial: Will Salah Abdeslam ever be released from…

Climate change: How much carbon dioxide has been produced since you…