France faces raging wildfires and second heatwave of the summer

This photo provided Thursday July 14, 2022 by the fire brigade of the Gironde region (SDIS33) shows a wildfire near Landiras, southwestern France, Wednesday, July 13, 2022.

More than 1,000 firefighters have been deployed to try and contain the flames in France’s Gironde region where as many as 7,000 hectares of land are believed to have been destroyed.

France’s President Emmanuel Macron visited a crisis centre where the situation is being monitored in Paris on Friday.

He described an “exceptionally harsh season”, adding that they had “already lost three times more forest areas than in 2020.”

The French president thanked firefighters for their “heroic efforts”, and expressed gratitude towards other European nations that have been helping France tackle the crisis, including Greece which “has made several devices available,” and Italy which “should provide assistance in the coming days,” Macron said.

In the southern region of Bouches-du-Rhone, firefighters battling another blaze said after days of work that they believed they had the situation under control. But the region remains on high alert.

Several cities in both regions have cancelled fireworks for Bastille day on Wednesday for fears of triggering new fires. Authorities are discussing a total fire ban.

It comes as France is in the midst of a severe drought with water restrictions in place in several regions and is facing its second heatwave this summer. 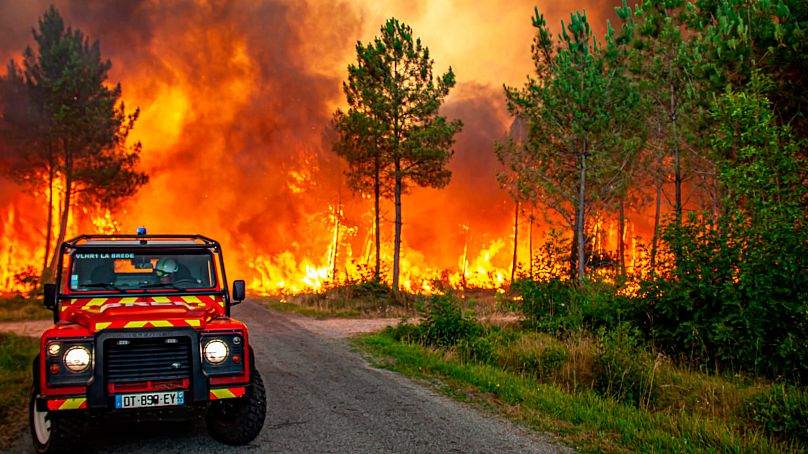 This photo provided Friday July 15, 2022 by the fire brigade of the Gironde region (SDIS 33) shows a wildfire near Landiras, southwestern France, Thursday, July 14, 2022.SDIS 33 via AP

Between 1976 and 2000, France experienced one to three days a year when temperatures would climb beyond 35°C.

Since then, the average number of days a year when thermometers will register such high temperatures has climbed to between three and ten.

The weather agency predicts that, by the end of the century, France may experience as many as 40 days of intense heat per year.

The country remains scarred by a deadly heat wave that killed 15,000 people in 2003 which prompted the creation of a “Plan Canicule” or a National Heat Wave Plan which authorities now trigger every year in June.

Beyond public health warnings about the risk of exposure to high temperatures, the government has also placed emergency responders and medical personnel on high alert.

Study: U.S. headed for ‘mass death’ due to opioids mixed with other…

In ruling on Trump finances, court finds broad authority for…

From Pushkin to Gagarin, Ukraine rids itself of Russia one symbol at a…