French President Emmanuel Macron was re-elected on Sunday with 58% of the vote compared to 42% for far-right candidate Marine Le Pen.

Voter turnout was lower than the last time Macron and Le Pen faced each other in the second round just five years ago as they present two significantly different visions for France’s future.

Abstention was estimated by Ipsos to be at around 28% nationally, which if confirmed would be the highest since 1969.

The French president, who won a second term in office on Sunday, will speak on the Champ de Mars in front of the Eiffel Tower in Paris. Five years ago, he spoke outside the Louvre Museum, another historic landmark in France’s capital city. 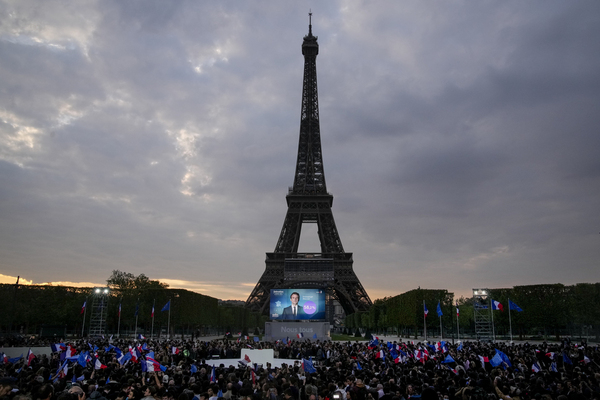 “Europe breathes. But on French television, someone has pointed out a disturbing fact. Five years ago, the distance between him and Le Pen was 10 million French. Now it seems to have halved: five million,” he tweeted.

“I look forward to continuing our excellent cooperation. Together, we will move France and Europe forward,” she tweeted.

Far-left leader Jean-Luc Mélenchon called on people to vote in the legislative elections, saying he was worried about Macron’s plans to raise the retirement age and his “climate inaction” among other policies.

But he said the defeat of far-right Marine Le Pen was “good news” while qualifying that Macron’s “monarchy survives by default.”

Le Pen said her score was “a resounding victory” stating that she had hope and would fight in June’s legislative elections.

She said her party the National Rally would unite those who wanted to oppose the newly re-elected president, Emmanuel Macron.

Le Pen said that the “historic score” would allow them to increase the number of MPs in the lower house of parliament, the National Assembly.

“I will never abandon the French,” Le Pen said.

‘We can count on France for five more years’, EU Council president says

“Warm congratulations dear Emmanuel Macron,” tweeted Charles Michel. “In these turbulent times, we need a solid Europe and a France that is totally committed to a more sovereign and more strategic European Union.”

French President Emmanuel Macron has been re-elected with 58.2% of the vote, projections show.

Far-right leader Marine Le Pen received a higher score than five years ago, with 41.8%, according to projections.

He is the first president to get a second term since President Jacques Chirac in 2002.

Deaths among Alzheimer’s patients increased by 26% during first…

Solar cells on roads, a new direction for Europe’s energy…