Dmytro Fedorchak, 28, in front of the now-removed statue of Alexander Pushkin in Ternopil

A month into Moscow’s invasion of Ukraine, Dmytro Fedorchak threw a bucket of red paint on a statue of Russian poet Alexander Pushkin in the centre of his hometown, the western city of Ternopil.

“I wrote (on the statue) that we should demolish it. That the war in Ukraine should stop,” 28-year-old Fedorchak told Euronews.

“I never could explain why we had a statue of Pushkin here. He isn’t even from Ukraine.”

Ternopil authorities removed the statue in April as other regions in Ukraine have started to question why monuments from Soviet times remain after Russia invaded the country in February.

“Pushkin doesn’t have anything to do with what we need to build here in Ukraine, like our own culture,” says Fedorchak, who works as an IT manager.

“We should demolish all those post-colonial things, which don’t belong here and highlight local poets and artists.”

The city of Ternopil has now renamed streets associated with Russian figures, such as Yuri Gagarin, the first man in space.

The city will also remove a Soviet tank and aircraft, both on display to remember World War II, and will replace the aircraft with a “Heroes of Ukraine” monument. 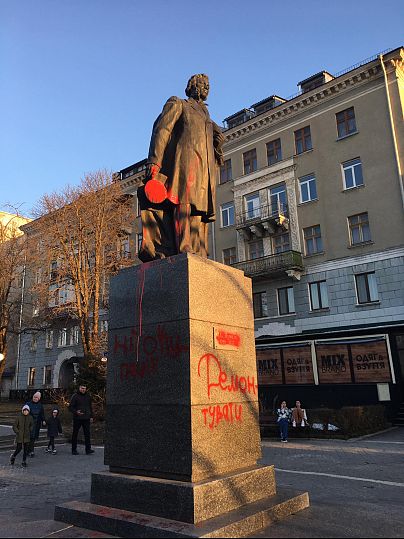 Soviet symbols removed throughout the years

It’s not the first time cities in Ukraine have removed symbols and monuments that date back to the Soviet era.

While many cities and towns with statues of Lenin began removing them in the 1990s and 2000s, “during Maidan uprisings (in 2013 and 2014), the removal of statues of communist-era figures was sporadic,” said Pavlo Fedorchenko-Kutuev, the chairman of the sociology department at the Igor Sikorsky Kyiv Polytechnic Institute.

But in 2015, after the Russian annexation of Crimea, the Ukrainian parliament passed “de-communisation laws” banning Soviet symbols.

“The law made this process state-managed and state-controlled,” said Fedorchenko-Kutuev.

In 2017, the Ukrainian Institute of National Remembrance wrote that more than 50,000 streets and objects had changed names in Ukraine due to those laws, but monuments of some Russian artists stayed.

Pushkin is considered by many to be Russia’s most prolific poet and one of its greatest writers. He was born into a noble Russian family in Moscow in 1799 and died following a duel in 1837.

“Pushkin was vigorously promoted by the Soviet government… so his monuments can be found everywhere around former Soviet space,” said Fedorchenko-Kutuev.

“Now Pushkin is seen as a representative of Russia waging a barbaric war against Ukrainians,” he said, adding that he doesn’t find it surprising that municipalities are again removing objects associated with Russia.

Gary Rhodes: ‘He could be stubborn… the mark of a…

Fedorchak says that he is happy that his hometown has decided to remove the statue of Pushkin and took further steps to remove other Soviet-era monuments.

“I really support the idea of demolishing these symbols. We need to rethink what World War II is and demolish Soviet thinking,” said Fedorchak.

“We are part of a country, and this was a part of us, but we should remember it as something terrible and not as something great,” he said, arguing that the memorials often portray the war as the Great Patriotic War and something to be proud of.

“We have to rethink how we can keep this memory in a different way,” he argues.

Ternopil mayor Serhiy Nadal told Euronews that the city’s action to remove all the symbols comes as a consequence of the war.

The statue of Pushkin was erected in central Ternopil in the 1960s close to the KGB building on the square, which was also named after Pushkin back then.

“Now not only Ukraine, but the whole world calls Russia’s war against Ukraine genocide, the destruction of Ukrainians.”

He argues that Ukrainians have been killed by Russians for hundreds of years.

“Russian tyranny was not limited to the Soviet Union but existed long before its emergence. Russian circulars on the banning of the Ukrainian language, culture, the artificial planting of the ‘Russian world’, the rewriting of Ukrainian history, and the humiliation of Ukrainian heroes date back several hundred years…We have to take our history back.”

A call for museums instead of monuments

Fedorchak says that there should be monuments of local artists and people who helped Ukrainian society.

Instead of Soviet-era monuments, he says Ukraine should have museums dedicated to understanding the Soviet Union in its historical context.

“We should not replace these monuments with military things, in my opinion, such as our heroes,” he said.

“I don’t want us to become a military nation such as Russia. We should be a nation of scientists, artists, poets, and people like that. We should promote that.”

Fedorchak adds that Ukrainians should still read Pushkin’s poems in school, the same way that they would read poems of other great writers. However, Pushkin should be remembered as a Russian poet and not as something special for Ukraine.

“We also read fairy tales from the Danish writer H. C. Andersen in school, but that doesn’t mean that we put a statue of him in the central square of Ternopil,” argues Fedorchak.

For Fedorchak, the replacement of Russian and Soviet symbols with Ukrainian artists would be a step forward to remove the Soviet legacy in Ukraine. He understands that some critics want the statues and monuments to stay, but argues that things shouldn’t just stay because they have been there for a long time. It should follow changes in society.

“I see a big difference between me and the younger generation,” he said. “I was born in an independent Ukraine, but I still have some Soviet thinking in myself. I am always thinking of the worst-case scenario and it is a struggle for me inside my head to speak freely.”

“The younger generations do not have that. We need to remove our Soviet thinking,” says Fedorchak, who argues that removing Russian and Soviet symbols is a step towards that goal, “It is like having a filter inside your head, and we need to get that out.”

Ethiopia’s Abiy Ahmed and TPLF must communicate and…

Kim Kardashian West jokes about her divorce from Kanye, sex…

COP26: Sparks fly over loss and damage from climate change…