Judo was welcomed back to Georgia in typical fashion, with a passionate crowd full of riled-up fans.

She was awarded her medal by Mr Mohammed Meridja, IJF’s Education & Coaching Director.

Home favourite Temur Nozadze was having a terrific day – filled with tense and exciting exchanges at the under 60kg event, giving the home crowd exactly what they came for.

He took on up-and-coming Giorgi Sardalashvili in an all Georgian final. The two young Judoka battled it out in overtime in what proved to be an epic fight, concluding with a ferocious throw from Nozadze.

Both locked in, fully committed, one athlete had to go. Nozadze’s determination won out, giving him the victory, and grand slam glory.

The two showed great respect and friendship afterwards, appreciated by all in attendance.

Ukraine war: UN in new attempt to evacuate civilians from…

“It’s always hard when there is a contest between two Georgian judoka,” Nozadze told reporters afterwards. “Especially when it is the final, so it was very tense and difficult for me. But you know, I was able to gather all my energy and finally, I won the gold medal. I’m very happy.”

After warming up together, friends became rivals in the final of the under 52kg category. Olympic Champion in the under 48kg, Distria Krasniqi caught Hungary’s Reka Pupp with a strong O-soto, and then transitioned straight into groundwork to earn the Ippon.

IJF Sport’s Director Mr Skander Hachicha was on hand to award the medals.

Speaking to the press afterwards, Krasniqi explained she was happy to pair up with Pupp to train together before the event.

“Outside of the mat I respect everyone, and I try to help anyone that needs help. And today we both didn’t have any sparring partners, so actually she asked me to warm up. So of course I agreed because I needed her too. So we warmed up and wished each other good luck to see each other in the finals, and this happened so I’m very happy.”

It was a first Grand Slam outing and medal for Huh Mimi in the under 57kg category. The 19-year-old Korean was awarded the gold medal by IJF Head Referee Director Mr Ki-Young Jeon.

The Georgian team was out in force today as many of the country’s young judoka brought surprises in each category! 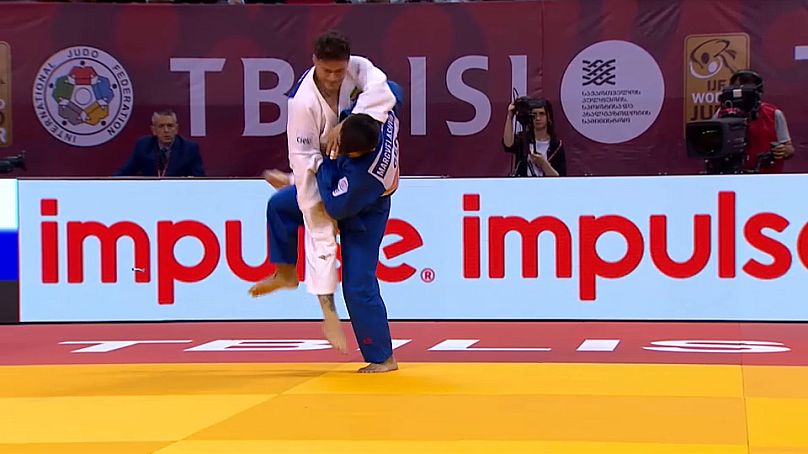