Ukrainian refugees wait to collect aid and register at a centre for internally displaced people, amid Russia's invasion of Ukraine, in the town of Kryvyi Rih

Hundreds of bikes are left piled up on the outskirts of Zelenodolsk, a small town in southern Ukraine just 15 kilometres from the frontline.

They serve as a poignant symbol of lives suddenly interrupted as locals fled the war.

Now, nearly six months since Russia’s invasion began, fighting is intensifying in southern Ukraine after President Volodymyr Zelenskyy ordered a counteroffensive to regain control of Russia-occupied areas such as Kherson.

In Zelenodolsk — which is in Ukrainian territory and around 130km from Kherson — artillery attacks often reach the town centre. It’s forced many to flee. Those that stay barricade their windows with wood to protect from the fragments.

“It is tough here, we live under bombings,” said Svetlana. “They fly over our heads all the time. Unfortunately, we cannot do anything about it other than hope that the military will protect us.

“I really hope the counteroffensive will work. We cannot continue to live like this. If it doesn’t work, I don’t know what we will do.”

The 53-year-old talks to Euronews as she stands in a queue to collect food from volunteers – the only way for her to survive.

It’s a bleak reminder that the economic impact of the war.

“I am constantly in fear. It is so scary, but we try to hold on,” she added. “So many are out of jobs. It is hard to survive.” 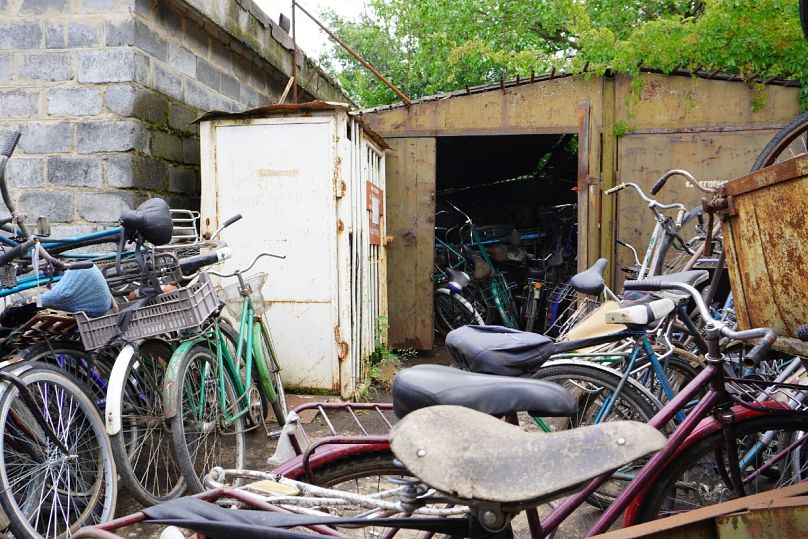 Hundreds of bikes have been left in Zelenodolsk as people have fled the fighting.Credit: Stefan Weichert

It is not only Zelenodolsk where Russia’s invasion is taking its toll: Kryvyi Rih, the regional capital, 40 kilometres north, is also feeling the effects.

Several factories have closed and the city’s largest employer, the steel plant ArcelorMittal, has had to reduce its output, prompting job losses. Before the Russian invasion, 22,000 people worked there, although it’s unclear how many have been laid off.

“The economic situation is very tense,” Oleksandr Vilkul, the head of the military administration in Kryvyi Rih, told Euronews. “95% of our exports and imports to our large industrial companies came through the Black Sea.” 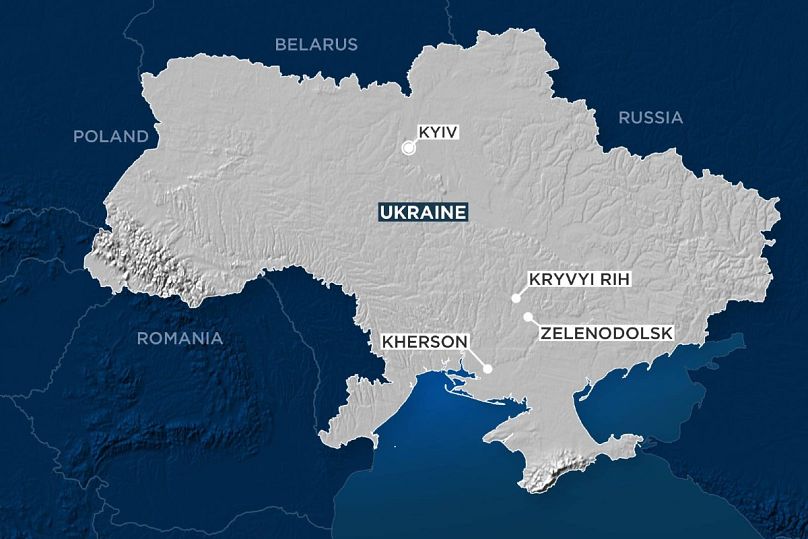 Zelenodolsk and Kryvyi Rih are in Ukraine-controlled territory, while Russian forces have occupied Kherson since the early days of the war.Credit: Euronews

Russia’s blockade of the Black Sea has meant Ukraine’s ports have ground to a halt. Limited shipments of grain are now being allowed to leave following an UN-brokered deal between Ukraine, Russia and Turkey.

The impact on the city is severe. Shops are closed, many people are out of work and the threat of Russian attacks is constant, said Vilkul.

“There are lots of terrible things that they are doing. And I can tell you when we liberate more territory, there will be several places worse than Bucha,” he added, referring to claims that Russian soldiers committed war crimes against civilians in areas north of Kyiv in February and March.

“The basis of Russia’s strategy is to strangle our economy and cut us off from the Black Sea, where our main exports go.” 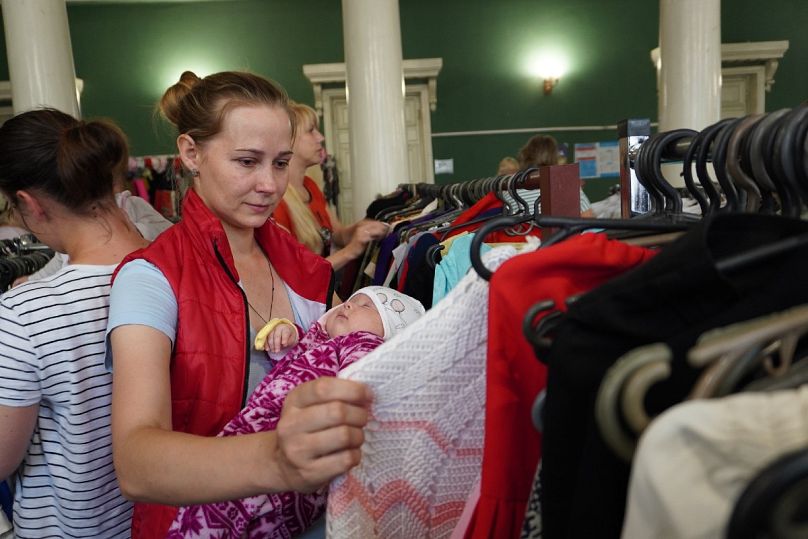 Lena looks for clothes after fleeing the Kherson region without her belongings.Credit: Stefan Weichert

‘You are just waiting for a missile to kill you’

Kryvyi Rih is also home to several refugee centres, which have been hosting increasing numbers of people after Kyiv — amid the planned counteroffensive in southern Ukraine — called on locals to flee.

Many have come from the Kherson region, which Russia has occupied since the early days of the war.

One of them is Lena, 28, who spoke to Euronews as she was looking for clothes for herself and her family after leaving almost all her belongings behind.

“We are still scared. My son is still afraid to go inside because he worries that Russia will drop a bomb on us. They did that at home,” Lena says, “It is better here. It is more stable. It is not only about surviving, but I hope to return home sometime.”

Russia is currently considering having a referendum in the Kherson region to integrate it into Russia: a similar tactic was deployed when it annexed Crimea in 2014.

This means Lena fears Ukraine will be unable to take the territory back and that she will never see her home again.

“I really try not to think about it,” said Lena. “I love my home, and I would like to go back, but it is too unstable.

“Every night, when we were sleeping, the house was shaking. You are just waiting for a missile to kill you.” 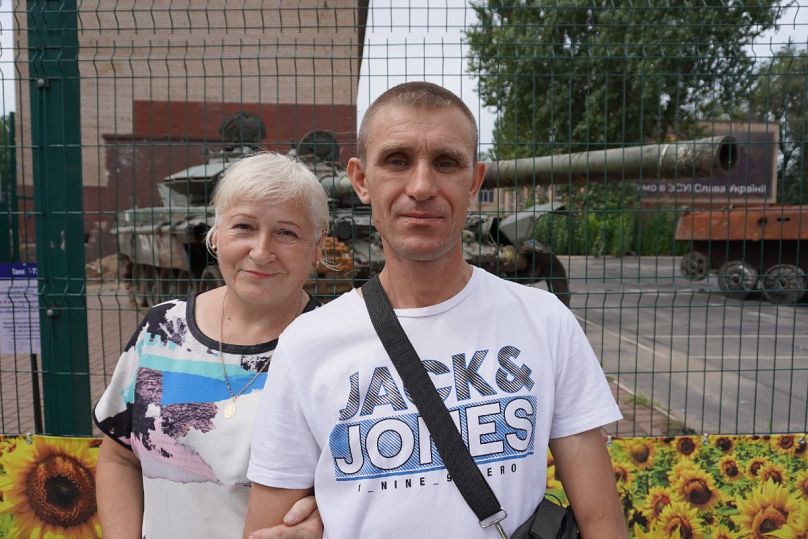 60-year-old Larysa and 40-year-old Vladimir doubt that Ukraine will be able to push the Russian troops out of the Kherson region.Credit: Stefan Weichert

‘I don’t know what we will do’

In the centre of Kryvyi Rih, captured Russian tanks and other military vehicles stand as proud symbols of Ukrainian success.

Yet some doubt whether Kyiv can retake Kherson and anyway, for many, the most pressing preoccupation is arguably the economic situation.

Vladimir, 40, is looking at one of the tanks with his family, including his 10-year-old son. He has work as a blacksmith, but, due to the war, only for two days a week.

“I earn less than half of what I used to,” he said. “So it is hard. But it is better than others who are completely without work. But still, we don’t have much money.

“I am not sure what we will do in the winter if this continues. We dream that the war will end, but I fear that we cannot retake territory. The situation now is not sustainable.”

60-year-old Larysa, who is with her grandson, is also worried.

“If you ask me if I seriously think that we can retake Kherson, I will need to say that I doubt it,” says Larysa. “I hope so, but it will be hard.”

“If we can’t do that and the economic situation is like now, I don’t know what we will do.” 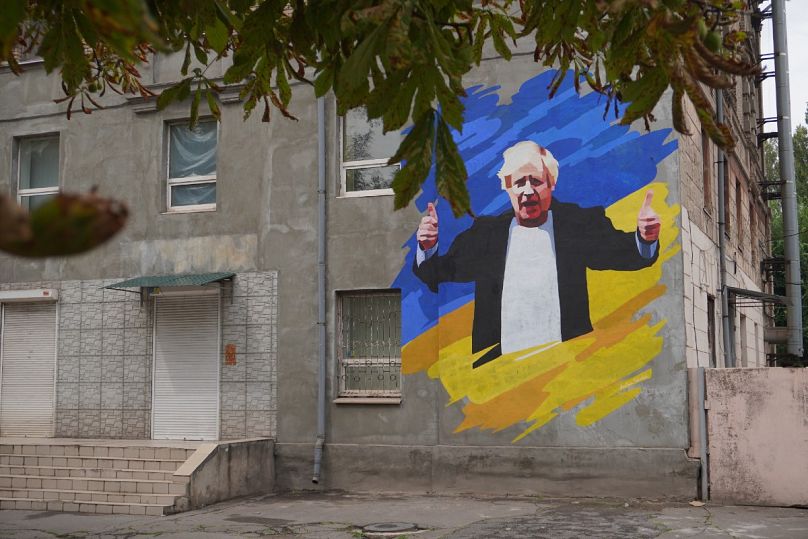 A new mural with British Prime Minister Boris Johnson has appeared in Kryvyi Rih. He is by many a symbol of Western support to Ukraine.Credit: Stefan Weichert
Source