When Olga Denisyuk first heard about Russia’s war in Ukraine she stopped feeling her legs.

Four months later — by which time Russian troops had bombarded and occupied her city, Kherson — the 72-year-old’s hands began to go numb.

And then her speech blurred.

Finally came the day amid the war when Denisyuk came closest to death: on June 24 she suffered an ischemic stroke —the blockage of an artery leading to the brain.

Denisyuk believes that chronic stress sparked when Moscow’s invasion began in February was a key factor in her deteriorating health.

Ischemic strokes are the most common type in Ukraine, where stroke mortality is higher than in most of Europe, according to the European Stroke Organisation.

Last year, the Center for Medical Statistics of the Ministry of Health of Ukraine reported 134,477 cases of stroke, the highest incidence since 2017.

Experts have told Euronews the number of strokes is rising since the outset of the war, even though the number of deaths it causes pales into relative insignificance when compared with the impact of Russian shelling. 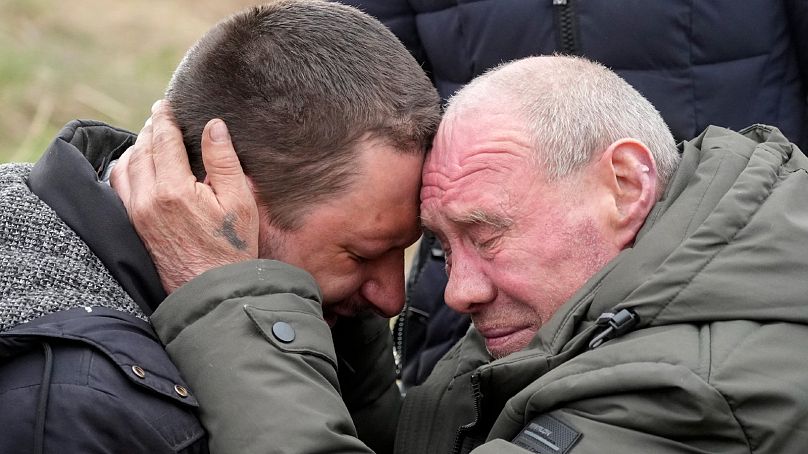 Relatives cry at the mass grave of civilians killed during the Russian occupation in Bucha, on the outskirts of Kyiv, Ukraine, Friday, April 8, 2022Credit: AP Photo

Lucky to be alive

From the time her stroke began, it took Denisyuk 25 minutes to find transport to a hospital. In a city that now lacks a mobile phone network, she is arguably lucky to be alive.

“Mobile operators are completely disconnected in our territory, due to the fact the occupiers are trying to introduce Russian communication,” said Juliia Vlasiichuk, 29, a neuropathologist and coordinator of the stroke ward that treated Denisyuk.

“The population cannot call an ambulance by dialling a short number. As a result, we lose such important time in the treatment of stroke.”

Strokes, added Vlasiichuk, are a result of stress about the war.

“These diseases don’t come from the disease themselves, they come from worrying,” said Vlasiichuk.

“Constant shelling in villages near the city provokes an increase of blood pressure in people, which often leads to hemorrhagic stroke.”

Although around half of Kherson’s nearly 300,000 residents have fled the city since the war began, Vlasiichuk said the number of stroke cases remains the same as before the invasion, showing an increase in cases in the remaining population.

“The number of strokes is increasing every month,” said neurologist Pavlo Lebedynets from the Ukrainian Stroke Medicine Society.

But, according to Lebedynets, the number of neuro-interventions has decreased in central and eastern Ukraine, partly because doctors from war-torn areas moved to western Ukraine or fled abroad in search of safety.

Since 24 February, Lebedynets has seen more cases of hemorrhagic stroke — the bleeding in the brain due to a broken vessel — in young soldiers. Some do not receive proper treatment on the first day and suffer ruptured aneurysms that develop into ischemic and hemorrhagic strokes.

I don’t consider it a war. It’s a disease, an awful disease that eats everyone from the inside

While local doctors continue their long struggle to promote stroke prevention and treatment, he believes that not all cases seek medical help because they can’t access ambulances and some are afraid to go to the hospital, as in the times of the pandemic.

“They are afraid to leave their house and that their home would not be there when they get back,” he said.

But despite the terror and uncertainty of war, which has already left several Ukrainian hospitals destroyed by shelling, stroke wards in Ukraine are working closer with each other than before.

“Before the war, everybody cared about their own hospital,” says Lebedynets. “We are trying to be a huge community.”

Lebedynets, who travels around Ukraine assisting stroke patients, highlights the help of foreign institutions such as the European Stroke Organisation and Angel’s Initiative in providing support channels, information and online training for Ukrainian physicians in wartime at no cost. 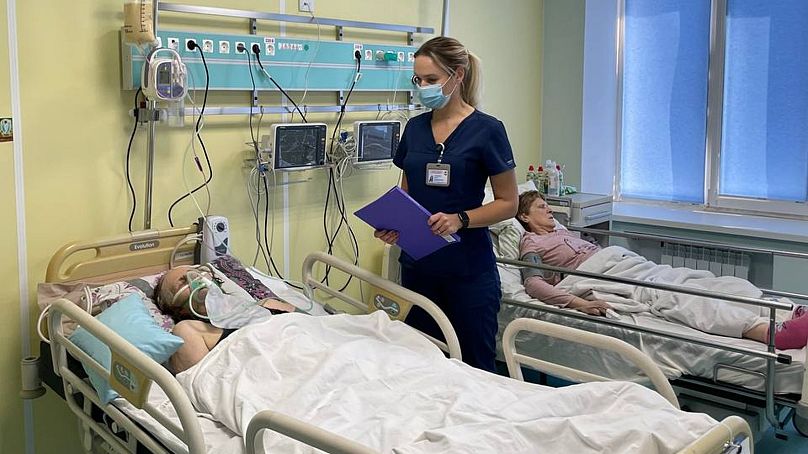 While access to devices essential for stroke treatment remains a major problem in Ukraine, the availability of drugs in the occupied areas is of increasing concern.

“We talk a lot about the injuries and the killings from the military assaults, but a lot of the deaths actually happen because people simply can’t get very basic medicine,” said Osnat Lubrani, Ukraine’s humanitarian coordinator.

Lubrani adds that further efforts will be undertaken in the near future to bring humanitarian convoys to Kherson, emphasising the urgency of delivering medicines for the ageing population with heart disease and diabetes.

“Many of those who can’t leave are those who have challenges, whether they are old or disabled,” she adds.

“The main thing is that patients do not take their basic therapy in the form of antiplatelets, anticoagulants, antihypertensives, and hypoglycemics, simply because the drugs are not available in pharmacies,” explains Vlasiichuk.

In Kherson, about 90% of the pharmacies remain closed, jeopardising the storage conditions of medicines purchased before the war.

“It is quite hot in our country now, and medicines are sold on the street in the open air, next to vegetables and fruits, meat, fish, without adhering to the temperature regime and hygienic norms,” said Vlasiichuk.

“Nobody knows what will happen when the drugs and consumables run out,” said Vlasiichuk. She predicts they only have medicines for two more months. “We hope that Kherson will be liberated during this time.”

Denisyuk has now left hospital. She must continue her treatment to avoid a second stroke that could be more dangerous due to her fragile condition. All this with the constant fear that comes with living on the front lines.

“It’s tough for everyone now, very tough,” says Denisyuk. “We are in such a condition that I don’t know… I don’t consider it a war. It’s a disease, an awful disease that eats everyone from the inside.”

Honeybees use social distancing when hive is under threat from parasite

Bank of England chief: I’m uneasy about inflation but we are a…

Health officials: Flu could rise this season as COVID-19 restrictions…