In 2019, Marinella Beretta, 70, was living by herself in a quaint villa wedged between the foothills of northern Italy’s bucolic pre-Alps and Lake Como’s shores.

Having no family other than a few cousins in a neighbouring region, she had recently sold her property to a Swiss entrepreneur. Her friends were few and far between, and acquaintances with whom she’d only had perfunctory interactions thought she seemed increasingly reserved.

One autumn day that year, Beretta suddenly felt unwell. A chronic sufferer of hypertension, she sat by her kitchen table and died. No one was there to witness her death or make any calls. She was simply left by herself, perched on her chair.

The pandemic struck. Letters arrived. Payments from the Swiss buyer were deposited in her bank account. Hedges, left untrimmed, grew into an unsightly mess.

It was only when neighbours complained the overgrown vegetation had become unsafe that firefighters finally discovered her mummified body on 6 February 2022, more than two years after her death.

The social hubs which once brought people together — be it the church or even secular community centres — are dying, and society is growing increasingly selfish

The story of Beretta’s unnoticed death sent shockwaves across Italy and the world. The country’s family and equal opportunities minister, Elena Bonetti, called her death an injury “to our conscience”. Como’s mayor promised a public funeral and urged for a “moment of reflection”.

A columnist for the Corriere della Sera, Italy’s biggest daily newspaper, lamented the lack of care of those around her and labelled Beretta “loneliness personified”. And countless others were left aghast at how society could leave one of its members so desperately behind.

Yet Beretta’s predicament is far from an isolated case. Rather, it represents the tip of a crisis that is hidden deep within the country’s living rooms and care homes, claim campaigners. They say a cobweb of cultural, demographic and structural issues have left Italy with one of the highest levels of loneliness and social isolation in the world – and that, unless systemic change is implemented, it will only continue to grow.

‘Our family model has exploded’: The roots of Italy’s loneliness crisis

Ermanno Olmi’s now-iconic 1978 film, The Tree of Wooden Clogs (L’Albero degli Zoccoli), is a tale of rural families making ends meet in 19th-century Italy and one of the many classics that has nourished the collective image of Italian society: one of close-knit families and inter-generational communities, where the young look after the old, and the old impart their wisdom on their grandchildren.

Yet the current reality presents a lonelier picture of an ageing society with diminishing networks, broken communities and increasingly forlorn pensioners.

Approximately 28% of Italians over the age of 65 live by themselves, a figure which jumps up to nearly 50% for women above 75.

Various European social surveys from the 2010s list Italy as having among the highest rates of loneliness in the EU.

A 2021 global survey is even more damning, with the country ranking fifth worldwide for self-reported loneliness.

For Marco Trabucchi, the president of the Italian Psychogeriatric Association (Associazione Italiana di Psicogeriatria) — who once labelled the loneliness crisis as “the leprosy of our century” — the pandemic did little more than exacerbate an already dire situation.

“The elderly were less affected by lockdowns, and we don’t have data showing an increase in loneliness,” he told Euronews. “Old people were alone before COVID, and remain alone after it.”

For Trabucchi, rather, the roots of Italy’s loneliness crisis are in a profound cultural shift that has been taking place over the past few decades.

“The whole idea of Italy having a ‘communitarian culture’ is a myth,” he stated. “It may have existed 20 or 25 years ago, but certainly not today.

“The traditional model, whereby the widowed grandparent would be looked after by their family, has exploded,” Trabucchi added. “Ours is a rapidly ageing society with a huge number of elderly people. The social hubs which once brought people together — be it the church or even secular community centres — are dying, and society is growing increasingly selfish.”

Beyond changing social dynamics, however, part of the problem resides around the elephant in the room: mental illness.

Most requests I receive are from the elderly, but we’re seeing a huge problem amongst our youth. They’re by themselves and have lost the in-person social networks that use to engage them

Betty Balzano, the founder of the non-profit Stop Loneliness (Stop Solitudine) association, blames a lack of general awareness and prudishness over open conversations on mental health for the loneliness crisis.

“Public knowledge of loneliness in Italy is at a prehistoric level,” she bemoaned while speaking to Euronews. “We know of psychology professors talking about loneliness, like Dr Paolo Riva, who has only published in English because there isn’t any real interest here in Italy.”

When asked to comment, Paolo Riva told Euronews that the situation had changed since he last spoke to Balzano and that books on the subject were being published in Italian, although he did concur that “there is little political and institutional-level interest in loneliness and social isolation in our country”

“Italians are often ashamed to talk about mental health, as if it were a taboo,” Balzano added. “We know that loneliness is often a consequence of mental illnesses and addiction, from eating disorders to compulsive gambling. And yet people in this country still don’t even know the difference between a psychologist and a psychiatrist. It’s utter madness.”

Czech Republic to let some workers stay on after testing…

If a changing cultural system is to blame, in Balzano’s eyes, it’s lingering social taboos and preconceptions of mental illness that are preventing people from getting the resources they need – leaving countless individuals, like Beretta, alone and without support.

‘I felt a true sense of emptiness’: Gianna Rol’s testimony

The 81-year-old also lives by herself without a partner or close family, residing in the small northern Italian town of Gattinara. Rol’s life was once filled with glitz and glamour, as she spent her younger years working as a creative in Turin’s burgeoning fashion industry. 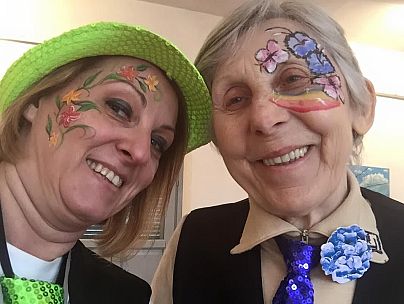 But after she retired early and her parents — to whom she had dedicated years of her time — died, she suddenly fell into a dark spiral of loneliness.

“I felt a true sense of emptiness,” she confessed to Euronews. “An emptiness in all senses of the word. Emptiness because I no longer had people around me, but also a deeper, emotional emptiness. I still had contacts and friends, I’d still see talk to people at the greengrocer’s, but I felt hollow inside.”

Rol’s life was veering particularly close to the image of isolation portrayed in the aforementioned studies and reports. But Rol refused to become yet another harrowing statistic.

In 2016, she approached Stop Solitudine (Stop Loneliness) upon the advice of friends and has since found that the experience has changed her life.

“My friends had told me that it was an association of fellow women creatives, which is why I approached the group. I met Betty [Balzano] and found that there were many other people like myself.”

But joining Stop Solitudine was more than a cathartic exercise for Rol.

Rather, it provided her with a newfound mission: that of preventing younger generations from falling into the same fate.

“I found a purpose there, to help younger people encountering difficulties and to welcome them,” Rol affirmed. “And we welcome everyone – we’re taking in refugees as well.”

“It doesn’t surprise me that Italy ranks so highly for loneliness,” she stated. “Talking about this is still a social taboo. But we need to open ourselves up to others.”

‘Please listen to what we’re saying’: The cry of those on the frontline of the battle

Rol is one of the 845 people whose descent into loneliness was halted by Stop Solitudine.

Founded in 2004 in the small northern Italian town of Borgomanero, the organisation is one of the few at the front line of the battle against loneliness.

Its founder, Balzano, describes how her childhood experience of witnessing her mother’s bereavement motivated her to start this campaign. Her mission, nevertheless, is not just to reduce loneliness among the elderly, but to tackle the issue among the youngest in society, such as by raising awareness and offering support in schools

“Loneliness is the tip of the iceberg,” Balzano stated. “It starts from youth”.

But the cultural problems responsible for the issue are upheld by a structure that is unwilling to fight the crisis – a structure that has prevented Balzano’s organisation from expanding significantly beyond its remit in the Piedmont region, despite many calls from Rome and the south of Italy.

“There is a real reluctance from our political class to confront the issue,” she said.

The Ministry of Health recently announced a “psychological bonus” of €600 to help people affected by the pandemic find the support they need. But explicit references to loneliness are generally lacking from the overall agenda.

We’d compare how we’re feeling as an organisation to Munch’s painting, The Scream. Alone and ignored. We beg of you, please listen to what we’re saying.

While the UK appointed its first Minister for Loneliness in 2018, Italy currently has no equivalent post. It’s only a few small towns in the northern region of Veneto which have taken it upon themselves to appoint a councillor for loneliness in the past few years.

“It’s a difficult situation,” Daniella Vigri — thought to be the first councillor in Italy to be given the responsibility of dealing with loneliness — told Euronews. She was appointed two years ago in the village of Villa del Conte, and helps people both emotionally and in a variety of practical tasks.

“Most requests I receive are from the elderly, but we’re seeing a huge problem amongst our youth. They’re by themselves and have lost the in-person social networks that use to engage them. Nationally, we’re lacking an institutional figure ready to address this challenge.”

When contacted for further information, the Italian Ministry of Health told Euronews that the issue had been addressed by minister Roberto Speranza in a Chamber of Deputies meeting on the National Recovery and Resilience Plan held on 15 February but did not provide specific details on plans to tackle the loneliness crisis.

“The Ministry [of Health] doesn’t occupy itself with loneliness,” Balzano pointed out. “Very few people in this country do. If we did actually tackle the issue, we’d prevent so many physical and mental ailments, and would save so much money.”

Reflecting on the overall situation, Balzano was ultimately unable to contain her frustration.

“We’d compare how we’re feeling as an organisation to Munch’s painting, The Scream,” Balzano concluded. “Alone and ignored. We beg of you, please listen to what we’re saying.”

Every weekday, Uncovering Europe brings you a European story that goes beyond the headlines. Download the Euronews app to get a daily alert for this and other breaking news notifications. It’s available on Apple and Android devices

CDC: Pediatric ER visits skyrocket for injuries and eating disorders during the pandemic

Is it COVID-19, allergies, or post-vaccine symptoms? How to tell the difference

A fourth COVID vaccine shot: Will it be necessary?