In Izium, liberation reveals torture and tales of a chaotic Russian escape

A Ukrainian soldier near the entrance of Izium does a peace sign standing on a captured Russian T tank.

On a small hill in front of a destroyed bridge in recently recaptured Izium, a couple gazes at the horizon through their broken windows.

Here, the scars of Russia’s occupation are not all as tangible.

Igor, a charismatic 62-year-old, still suffers from a concussion after falling when an explosion hit the bridge.

A strategic city in Ukraine’s northeast Kharkiv region, Izium fell to Russian forces on 2 April, relatively early in the war.

When they started going from house-to-house, Igor, recalls frantically hiding traces of his son, a lieutenant colonel in the Ukrainian army.

“The pictures of us and him in uniform were buried,” he told Euronews immediately after Ukrainian forces had retaken Izium.

“The military uniform he brought me was hidden. We hid everything we could and hid it deep.” 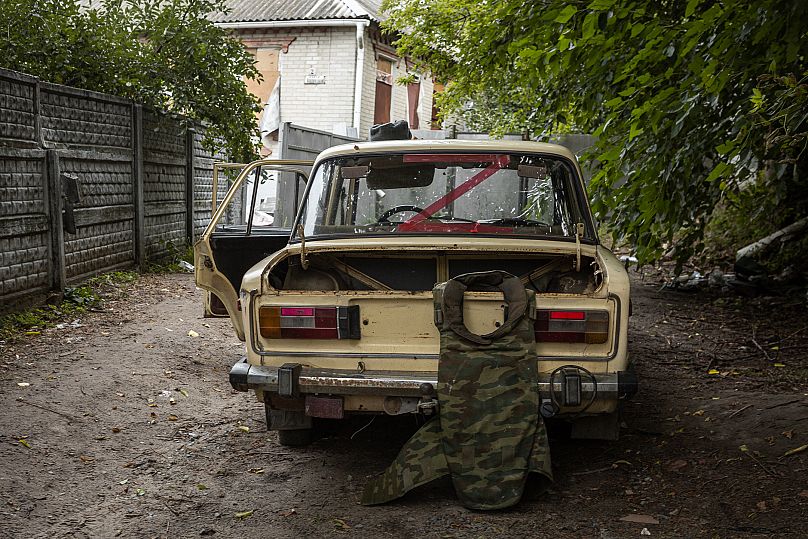 As Igor was speaking to Euronews, gunfire crackled in the distance.

Nearby, in a house where pro-Russian soldiers are said to have lived, there is evidence of a chaotic escape: old Soviet helmets, backpacks and body armour were left behind in seemingly frantic haste.

On the kitchen counter, a line from a damp copy of Kharkiv Z, a propaganda newspaper, reads: “It is clear that the destruction of Nazism is necessary”.

The reference to Nazism is a nod to Vladimir Putin’s widely rejected justification for invading Ukraine to “denazify” and “demilitarise” the country.

The articles mention events that occurred in early August. Photos documenting humanitarian efforts in support of the Russian occupation of the Kharkiv region were placed with a photo of Ukrainian President Volodymyr Zelenskyy with a toothbrush moustache resembling Adolf Hitler.

On the outskirts of Izium, a sombre caravan of battered Russian military vehicles provides further evidence of Ukraine’s successful counter-offensive, which officials claimed saw them retake 8,500 square kilometres of Kharkiv territory in just a week.

Fleeing Russian troops left equipment and bulletproof vests behind. Credit: Manuel Orbegozo. At the gates of the city, Ukrainian soldiers stop to take photos, trampling on a Russian flag in the process.

BA.2 variant of COVID-19 may not lead to deadly surge, Fauci… 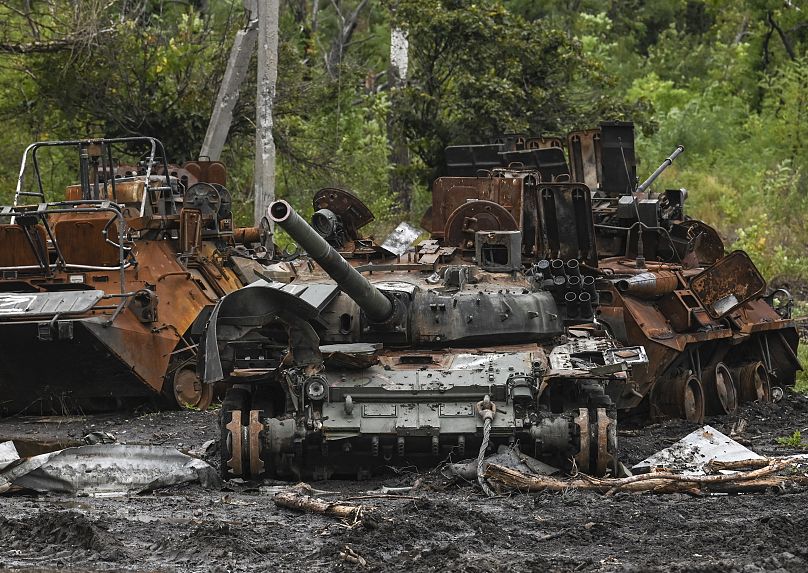 A destroyed Russian tank and armoured personnel carriers on the outskirts of Izium.Credit: AFP

Elsewhere, there are few people on the streets of Izium, a grim scene of empty buildings that have been ravaged by explosions.

Kittens scamper through the glass- and shrapnel-covered streets while the few civilians to be seen ride their bicycles around large potholes, oblivious to the “Z” inscriptions painted on doors and walls all over Izium.

The destruction did not escape Zelenskyy, who visited this week to raise the Ukrainian flag in front of a burned-out city hall building.

“The view is very shocking but it is not shocking for me,” the Ukrainian leader told the press. “Because we began to see the same pictures from Bucha, from the first de-occupied territories … the same destroyed buildings, killed people.”

The parallel that Zelenskyy drew with Bucha — a city near the capital Kyiv where civilians with signs of torture were found dead in the streets — came into sharp focus when it was later revealed a mass grave had been found at Izium. 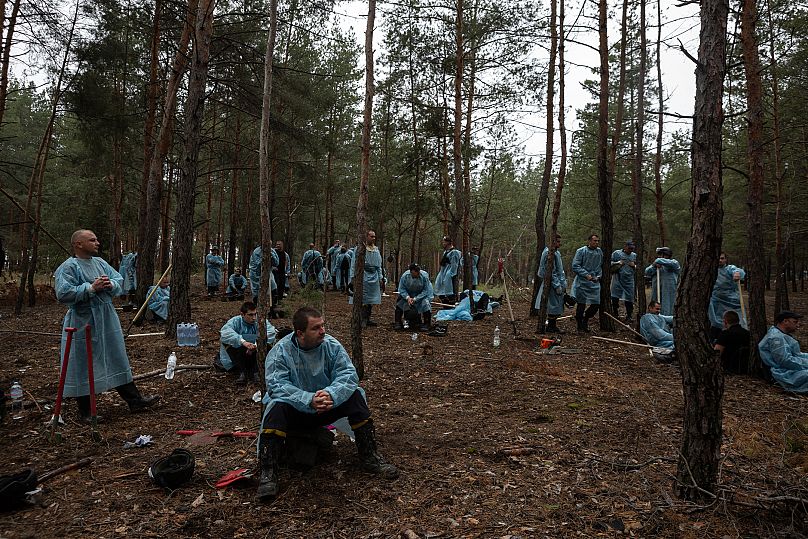 Workers at the mass burial site near IziumCredit: Manuel Orbegozo

Euronews watched as, under a light drizzle, a forensics team struggled for hours amid the humid dirt and stench of decomposed bodies as they were exhumed from a forest on the outskirts of the city.

The newly discovered mass burial site, in which at least 445 civilians and 17 soldiers were buried, evoked the horror of life under Russian occupation.

Before the exhumations began, metal detectors were used to scan the site for explosives, and soldiers strung red and white plastic tape between the trees.

The graves were marked with simple wooden crosses, some bearing the name of the victim, others had flowers hanging from them. 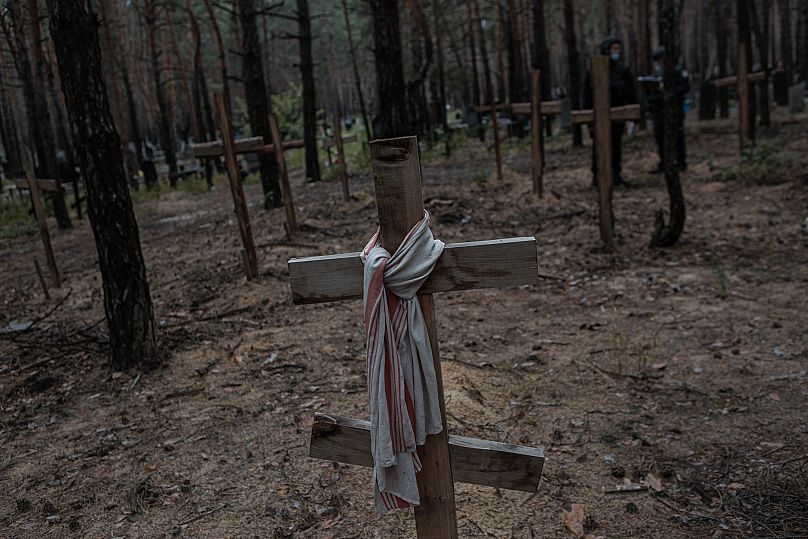 A wooden cross at the mass grave near Izium.Credit: Manuel Orbegozo

In the pockets of one of the dead, they found a smartphone. On an adjacent body, the coroner had to pour water on the chest area to clean the dirt away, revealing multiple tattoos: a skeleton, a samurai and the name “Alina” still visible on a pale torso.

“All the people found here were buried during the occupation and all were victims of Russia’s war against Ukraine,” said Serhiy Bolvinov, the chief police investigator for the Kharkiv region. “Some bodies have signs of torture, with a rope around their necks or bound hands.”

‘Howdy, Modi!’: Thousands, plus Trump, rally in Texas for…

From George VI to Elizabeth II, memories of how royal funerals have…