Inflation: Why the Bank of England is set to raise rates when it can’t influence many rising costs

The number might have surprised most economists, who were anticipating a figure slightly below 4% rather than slightly above it, but in another sense there’s nothing enormously surprising about today’s inflation figure, striking as it may be.

Everyone expected CPI to rise sharply in October, as we saw the impact of higher energy prices on the typical shopping basket of goods which constitutes the Consumer Price Index (CPI).

We’ve known for many months that raw material prices have been on the rise, and that the potential for higher prices has been strong. Even so: it’s worth reflecting on the root causes for the highest rise in prices in a decade.

There are some obvious short-term explanations, from the domestic – the end of the COVID-era VAT cut for the hospitality sector, the rise in the home energy price cap – to the international. 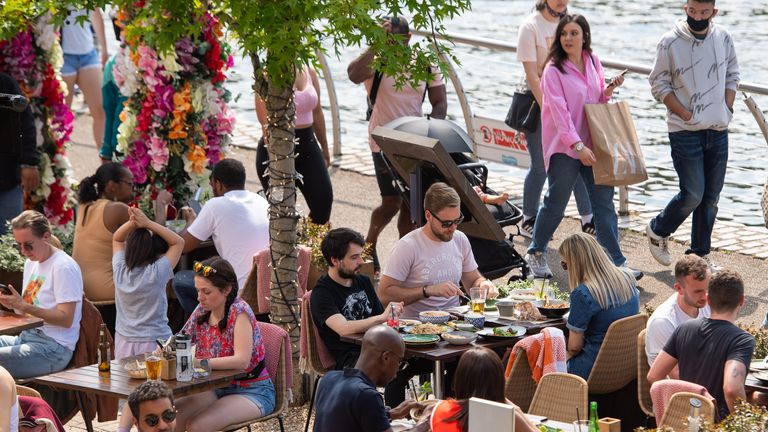 Ukraine war: Girl among three killed in bombing of…

Most obviously, the world economy is whirring back into action in the wake of COVID-19 shutdowns. The rebounds are even bigger in countries like the United States, where President Biden is splurging trillions of dollars on new investment and household support packages.

The economic system is not especially used to annual growth rates of 6% or above, which is what we’re looking at in many developed economies this year. With so much demand for goods, there is little surprise that prices are on the rise. And in one sense this kind of inflation represents good news, since it reflects positive economic news.

The issue, however, is that often inflation is not a good news story.

Sometimes rising prices do not come hand in hand with rising growth. Sometimes prices rise so high that they stifle demand, deterring people from spending and even sparking a recession. The big question occupying economists is whether, once the “COVID effect” has been and gone, this inflation is of the “good” or “bad” variety.

It’s probably too early to say for sure which one we’re looking at, though the fact that the Office for Budget Responsibility expects UK households to face another lean five years for real wages is not especially encouraging.

The fear in the Bank of England, however, is that this inflation becomes “sticky” in the coming months, with employees using price rises to justify pay increases, which in turn fuels an inflationary spiral with prices chasing wages ever higher.

That would make few people better off.

The Bank has already signalled that it’s likely to raise interest rates soon.

Whether that means next month’s meeting or the following one in February has been a matter for debate, but today’s inflation figures, alongside the strong labour market data yesterday, mean next month is looking increasingly likely.

However, speaking to me earlier this month the governor, Andrew Bailey, said there was only so much he and his colleagues at the Monetary Policy Committee can do to temper the prices we’re seeing right now.

Life, in short, is getting more expensive. And pretty soon borrowing will be too.

US cleared to impose tariffs on EU goods in Airbus trade…