A school bus carrying 60 children overturned near Lincoln but there are no reports of any serious injuries, emergency services have said.

Lincolnshire Police were called out at around 8.30am and said a 12-year-old boy sustained a broken arm and a 14-year-old girl was taken to hospital as a precaution.

An image suggests the vehicle partially tipped over after coming off the road in North Hykeham. 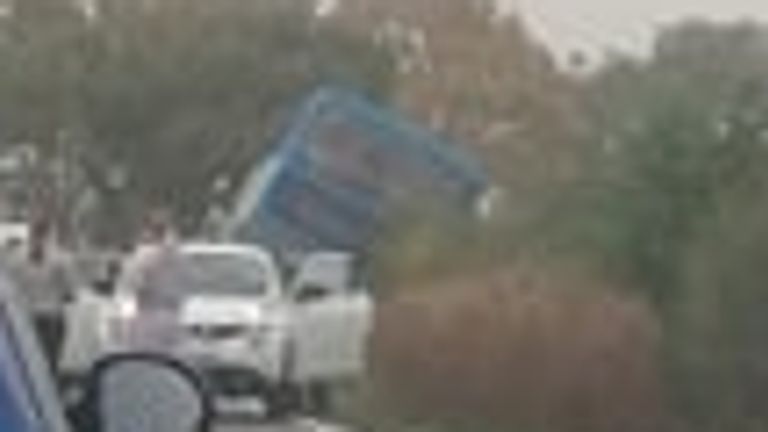 The force had said earlier in a tweet: “We are on scene at Meadow Lane, North Hykeham following reports of an overturned school bus.

“Thankfully there are no serious injuries reported.”

Lincolnshire Police also asked concerned parents not to attend the scene and to instead go to a rendezvous point at St Christopher’s School on Hykeham Road.

Meadow Lane was closed while emergency services dealt with the crash before it reopened about an hour later.

It is understood the bus was taking pupils to two local secondary schools.

We are on scene at Meadow Lane, North Hykeham following reports of an overturned school bus. Thankfully there are no serious injuries reported.

Please do not attend the scene. St. Christopher's School on Hykeham Rd is the rendezvous point. Inc 91 of today. pic.twitter.com/PLexA2LpY1

One side of the bus’s windscreen and other windows appeared to have smashed in the crash.

In a statement, Stagecoach East Midlands said: “Our immediate thoughts are with the children involved and their families.

“We are giving the police our full support in helping to investigate and establish the circumstances of the incident.”

Study: Cancer patients given high-dose radiation treatments even near…