Some 700,000 Ukrainian soldiers are now actively participating in defending the country, Ukrainian President Volodymyr Zelenskyy said in a televised interview on Saturday.

In comparison, Russia has deployed anywhere between 100,000 to 190,000 troops when it launched its invasion on 24 February, with the exact numbers of currently active units unclear.

‘Doug’ the mutant spud could be world’s…

Meanwhile, the Moscow forces continued their assault in the east after claiming victory in Mariupol on Friday as the last Ukrainian defenders holed up in Azovstal laid down their arms.

Follow the day’s developments in our live blog below and watch Euronews TV coverage in the video player above.

Russia suspended its gas delivery to Finland on Saturday morning in response to the country’s NATO membership bid.

The Russian military says it has fully taken over the Azovstal steelworks in Mariupol after the last Ukrainian fighters gave themselves up.

Earlier, Moscow said more than 1,900 Ukrainian fighters at the plant had surrendered.

Russian forces stepped up their assaults in eastern Ukraine, with fierce bombardment of Severodonetsk in the Luhansk region, which Moscow says is almost under its control.

Moscow should be made to pay for the destruction of property in Ukraine, President Volodymyr Zelenskyy said in his nightly address on Friday.

The Donbas region has been turned into ‘hell’, Zelenskyy said earlier.

Russia’s parliament has said it will consider allowing Russians over 40 and foreigners over 30 to sign up for the military.

Russia is to set up 12 new military bases in the west of the country in response to Sweden and Finland’s NATO bids.

Russia claimed to have captured Mariupol after a nearly three-month siege that reduced much of the strategic port city to a smoking ruin, with over 20,000 civilians feared dead.

There was no immediate confirmation from Ukraine. 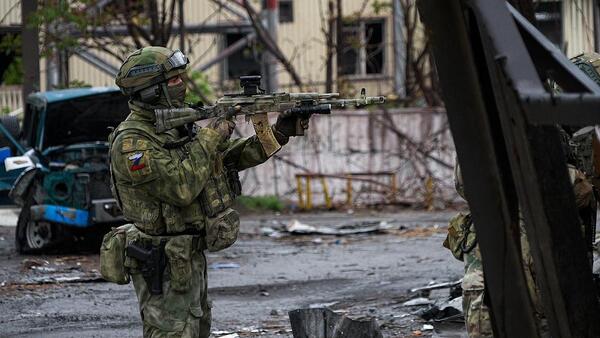 Russia has cut off its natural gas supply to Finland on Saturday, the country’s gas giant Gazprom confirmed on Saturday morning.

The cutoff came just days after Finland applied to join NATO, while Finland had refused earlier demands by Moscow that it pays for gas in roubles.

The cutoff is not expected to have any major immediate effect and there would be no disruption to customers, Finnish authorities said.

The German news agency DPA reports that the country will ship the first 15 Gepard anti-aircraft weapons to Ukraine in July.

DPA reported Friday that the delivery, which includes training and almost 60,000 rounds of ammunition, was agreed following talks between Germany’s defence minister and her Ukrainian counterpart.

It was decommissioned by the German military in 2012 but some 50 mothballed units are being restored by manufacturer KMW for use by Ukraine.

Russia should pay damages for destruction it caused, Zelenskyy says

President Volodymyr Zelenskyy devoted his nightly video address to Ukraine’s demand that Russia is held financially responsible for the damage its forces are inflicting on Ukraine.

He said Russia should be made to pay for every home, school, hospital and business it destroys.

Just on Friday, he noted, the Russian army fired a missile at the northeastern Kharkiv region, destroying a cultural centre in Lozova, and also hit the cities of Odesa in the south, Poltava in the east and Zhytomyr in the west.

According to Zelenskky, a legal mechanism should be created through which everyone who suffered from Russia’s actions would be able to receive compensation.

African scientists baffled by monkeypox cases in Europe, US

Backstage With… Rosamund Pike on the ‘risk’ of bringing a…

FDA approves underwear to protect against STDs during oral sex

Live: Ukraine will not cede territories to Russia to reach peace,…