Ukrainian servicemen walk at fragments of a downed aircraft seen in in Kyiv, Ukraine, Friday, Feb. 25, 2022.

Russian forces are closing in on the Ukrainian capital Kyiv on Friday after a wave of airstrikes on cities and military bases, on the second day of the invasion ordered by President Putin.

Russia’s military claims to have captured a key airport near the capital, while Kyiv’s mayor has said the city is entering a “defensive phase”. President Zelenskyy has appealed for defence assistance and intensified Western sanctions.

The Kremlin has been quoted by Russian news agencies as saying that Putin is ready to send a delegation to the Belarusian capital Minsk for “talks” with Ukraine. But Russia’s foreign minister says Ukraine would need to “surrender its arms”.

Russian forces are closing in on the capital Kyiv. The Russian military claims to have captured a key airport, after seizing control of the Chernobyl nuclear plant and destroying dozens of Ukrainian military facilities.Ukraine’s defence ministry claims the Russian military has suffered more than 1,000 casualties. Ukrainian casualty figures are estimated at well over 100 dead with hundreds injured.Two major sporting events have been withdrawn from Russia: the football Champions League final and the Formula 1 Grand Prix.Russia launched a full military assault on Ukraine on Thursday, invading the country from the east, north and south and meeting resistance from Ukrainian forces. President Vladimir Putin warned that any country attempting to interfere with the operation would see “consequences you have never seen in history”.

No Russian act will take part in this year’s Eurovision Song Contest, the European Broadcasting Union has announced.”The decision reflects concern that, in light of the unprecedented crisis in Ukraine, the inclusion of a Russian entry in this year’s Contest would bring the competition into disrepute,” the EBU said in a statement, adding that it “took time to consult widely among its membership”.

An extraordinary meeting of the 47-member organisation voted to suspend Moscow’s rights of representation on Friday, “with immediate effect”, in response to Russia’s “armed attack on Ukraine”.The decision does not cover the European Court of Human Rights, the council’s judicial arm, which will continue to offer protection to Russian citizens.The Council of Europe was set up after World War II to uphold human rights, democracy and the rule of law in Europe. It already took sanctions against Russia after its annexation of Crimea in 2014.

More on the story we reported on earlier. Emmanuel Macron has said that the EU sanctions against Russia will target the country’s “top leaders”. Euronews has confirmed reports that President Putin and Foreign Minister Sergei Lavrov are in the EU’s sights.France has said it is in favour of banning Russia from the SWIFT international payments system. But Finance Minister Bruno Le Maire said “some countries have reservations” when “a European consensus” is needed.Germany is one of the countries reportedly against the move. Foreign Minister Annalena Baerbock insited however that Putin and Lavrov would be ‘severely sanctioned” by Brussels.UK Prime Minister Boris Johnson said on Friday that Britain and northern European allies in the Joint Expeditionary Force (JEF) had agreed that more sanctions were necessary against Russia, focused particularly on Putin and his entourage. Founded in 2012, the JEF is composed of NATO members Denmark, Estonia, Iceland, Latvia, Lithuania, the Netherlands, Norway and the UK, plus non-members Finland and Sweden. It focuses on security in northern Europe taking in the Arctic, the North Atlantic and the Baltic Sea. (with AFP)

The International Olympic Committee urged sports bodies Friday to cancel or move all events they plan to hold in Russia and Belarus, and stop using the countries’ flags and national anthems.

The request from the Olympic body came after UEFA moved the Champions League final from St. Petersburg to suburban Paris, and after the governing body of skiing and Formula One pulled upcoming races from Russia.

Volleyball and shooting both have world championships scheduled to be held in Russia. There is also a World Cup qualifying playoff match against Poland scheduled for March 24 in Moscow.

Russia breached the Olympic Truce by invading Ukraine on Thursday, only four days after the closing ceremony of the Winter Games in Beijing. Some of the Russian troops entered Ukraine from Belarus, Russia’s ally.

It was the third Russian breach of the Olympic Truce in the past 14 years. Russia invaded Georgia during the 2008 Summer Olympics in Beijing and annexed Crimea shortly after the end of the 2014 Winter Olympics in Sochi. (AP)

Long COVID-19 may be caused by abnormally suppressed immune…

Putin is ready is ready to send a delegation to Belarus for talks with the Ukraine he invaded, according to Russian news agencies quoting Kremlin spokesman Dmitry Peskov. (see earlier post)
The Kremlin had previously consistently refused talks with Ukraine, despite repeated requests for dialogue from Ukraine’s President Zelensky before the Russian invasion began.
Russian Foreign Minister Sergei Lavrov qualified the offer on Friday, saying Russia was ready for negotiations if Ukraine “lays down its arms”.He said the objective of the invasion of Ukraine was to “liberate” the Ukrainians “from oppression”. (with AFP)16:32

Vladimir Putin has called on the Ukrainian military to “seize power” in Kyiv by overthrowing President Volodymyr Zelenskyy and his entourage, calling them “neo-Nazis” and “drug addicts”.
“Take the power in your hands,” the Russian president urged Ukraine’s army in a broadcast on Russian television.
He said he was not fighting army units in Ukraine but nationalist formations which behave “like terrorists” using civilians “as human shields”.The “Nazi” jibe comes even though President Zelenskyy is Jewish, while his government is democratically elected and not from the far-right. In an earlier justification for the invasion, Putin said one of the invasion’s objectives was to “de-Nazify” Ukraine, and he falsely claimed there had been a “genocide” in eastern Ukraine. (with AFP)16:05

What is SWIFT and why is it on everybody’s mind?

Russia’s participation in the SWIFT system has become the new Nord Stream 2: an ever-growing choir of voices is asking for its cancellation.

But what makes this move so important – and so risky?

The Society for Worldwide Interbank Financial Telecommunication (SWIFT) is an intermediary system that allows banks and institutions around the world to carry out financial transactions – that is, ordinary payments – among each other.

The system was founded in 1973 and is headquartered in La Hupe, Belgium.

Today, SWIFT links over 11,000 financial institutions in more than 200 counties and territories, making it an essential piece of our globalised, fast-paced economy.

Crucially, SWIFT is used by EU member states to pay for Russian gas and oil, two resources that represent the backbone of the Russian economy.

Since the EU is Russia’s number one energy client, many are now calling for the country’s expulsion from SWIFT in order to deprive Moscow of the much-needed funds to bankroll the ongoing invasion of Ukraine.

But the move is risky. A total expulsion from SWIFT would mean that virtually all EU-Russia trade would come to a sudden halt.

Total trade in goods between the bloc and Russia in 2020 amounted to €174.3 billion, of which €79 million were EU exports, according to the European Commission.

If this enormous amount of money were to disappear overnight, member states would feel the pain in an instantaneous and painful way.

The rapid pace of the war and the growing death toll, however, are putting more pressure on Western leaders to come up with the harshest and more radical sanctions that would make Moscow agree to a ceasefire.

SWIFT was conspicuously absent from the latest package of EU sanctions, announced on Thursday evening.

“[SWIFT] is always an option. But right now, that’s not the position that the rest of Europe wishes to take,” said US President Joe Biden when asked about the possibility.

EU foreign affairs ministers are meeting today in Brussels to finalise the new penalties and discuss a third sanctions package, in which SWIFT is poised to come back to the table.

“I also think that many countries want to go beyond what’s being agreed today,” Simon Coveney, Ireland’s Foreign Affairs and Defence Minister, told Euronews before heading to the ministerial meeting.

“There’s a lot of talk about the SWIFT system in terms of money transfers and banking that should be part of this package. We agree that the EU should make the case for that last night. And I understand that there is already a third package of sanctions that includes this one system, which may well be passed in the next few days.”(Euronews Brussels bureau)15:16

EU in talks to freeze assets of Putin and Lavrov

The European Union is in talks to freeze the assets of Russia’s President Vladimir Putin and Foreign Minister Sergei Lavrov in response to the invasion of Ukraine, Euronews can confirm.It depends on the cooperation of financial authorities and does not include a travel ban, in order to keep diplomatic channels open.Read more here: 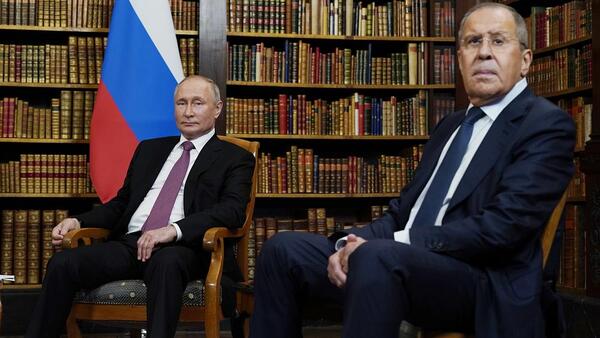 Live: Fighting around Sievierodonetsk intensifies as Russia fails to…

Ability to stand on one leg for 10 seconds may predict…

People with spinal cord injuries at higher risk for…