Britain unveiled a “first tranche” of sanctions against Russian entities and individuals on Tuesday, with the EU set to follow suit later.

UK Prime Minister Boris Johnson told lawmakers the sanctions against five Russian banks and three oligarchs are the “first barrage of what we are prepared to do and we hold further sanctions at readiness to be deployed alongside the US and EU if the situation escalates still further.”

EU foreign ministers are meanwhile set to meet at 16:00 CET to approve a package of measures against Russia. Germany has already announced it is suspending the certification process for the Nord Stream 2 pipeline linking it to Russia.

This is in response to Russian President Vladimir Putin ordering forces to “maintain peace” in separatist regions of eastern Ukraine after first recognising the area’s independence, raising fears that an invasion is imminent if not already underway.

Russian President Vladimir Putin on Monday night recognised the independence of the so-called Donestk People’s Republic and Luhansk People’s Republic — two separatist-held areas in eastern Ukraine.He signed a decree to dispatch Russian troops for “peacekeeping functions” in the regions.Ukrainian President Volodymyr Zelenskyy told the nation in a televised address: “We are not afraid of anyone or anything”.The UN Security Council held an emergency meeting;The UK announced a “first tranches” of sanctions, with the EU expecetd to follow suit on Tuesday afternoon.

Poland says heavy sanctions should be inflicted on Russia

Polish leaders welcomed Germany’s suspension of the Nord Stream 2 pipeline Tuesday but want to see tougher measures against Russia for its actions against Ukraine.Speaking at a press conference Prime Minister Mateusz Morawiecki called Nord Stream 2, built to carry Russian gas to Germany under the Baltic Sea but not yet in operation, a “harmful and dangerous geopolitical project.”The leader of Poland’s ruling Law and Justice party, Deputy Prime Minister Jaroslaw Kaczynski, described the suspension as “better than nothing but still much too little.” He said he thought that Nord Stream 1, a similar pipeline that has been in operation for years, should also come into play.“You cannot provide a very aggressive state with resources constantly so that it can increased its armed forces,” Kaczynski argued. Poland has warned that Nord Stream 2 would strengthen Russia’s hold on an energy-hungry Europe, giving it political leverage over the West.The Polish government also approved a homeland defense bill which increases military spending. The government had previously announced plans for the legislation but approved the bill as Russian President Vladimir Putin pursued authorization to use military force outside his country, which could presage a broader attack on Ukraine.Polish Defense Minister Mariusz Blaszczak was among the European leaders saying that Moscow had already sent its forces into eastern Ukraine.“Only serious sanctions can halt the rebuilding of the Russian empire by Vladimir Putin,” he said. 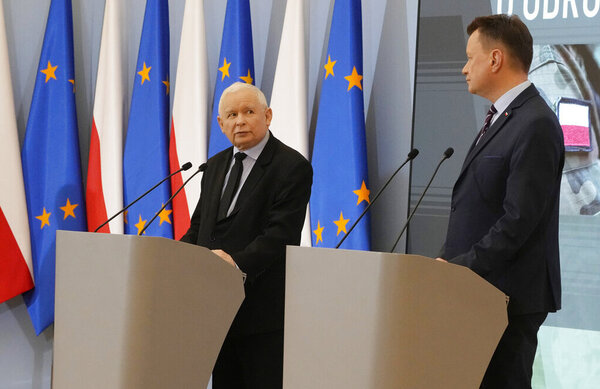 The Russian Foreign Ministry has announced it will evacuate staff from its embassy in Kyiv, and from consulates in Odessa, Lviv and Kharkiv. The announcement came on the ministry’s official Telegram social media channel on Tuesday evening, saying “in order to protect their lives and safety, the Russian leadership has decided to evacuate the personnel […] as soon as possible.” “Our first priority is to take care of the Russian diplomats” the post said. The ministry also said that Russian diplomatic premises in Ukraine had been “repeatedly attacked” since 2014, the year Russian-backed forces annexed Ukraine’s Crimea region. “Provocations have been regularly staged against the Russian Centre for Science and Culture in Kyiv, causing damage to the health of its head, as well as damage to the Centre’s property.” 18:21

The European Union is getting ready to take in refugees from Ukraine, as fears grow that Russia’s military aggression could soon cause a wave of migrants seeking shelter in EU countries.

Poland, a neighbouring country, has said it is willing to host them.

Speaking to Euronews from Warsaw, Ylva Johansson, the European Commissioner for home affairs, said contingency plans are already in place.

“The focus has been on the contingency planning for the very dangerous situation in Ukraine. We don’t know what would be the next step of Putin, but we have to be prepared if there will be a massive inflow of refugees of Ukrainians into the European Union. And Poland is, of course, a key country here,” she said.

Johansson avoided giving figures on how many asylum-seekers the bloc was expecting in case of a military invasion but stressed the EU’s unity was “very strong and determined.” 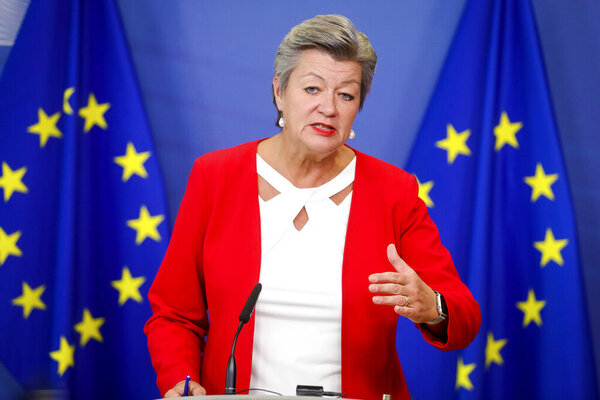 Russia ‘continues to plan for a full-scale attack on Ukraine’, NATO chief says

NATO Secretary General Jens Stoltenberg says that Russia is giving “every indication” that it continues to plan “for a full-scale attack on Ukraine.” Speaking to journalists at NATO headquarter in Brussels after a meeting of the NATO-Ukraine Commission, Stoltenberg said Russia had “promised to step back, but they have continued to step up.” The NATO chief, a former prime minister of Norway, said they are seeing more Russian forces moving out of camps in combat formations, and called incidents in Donbas “false flag operations” where Russia tries to “create a pretext for an attack.” Stoltenberg confirmed that Russian troops moved into Donbas and parts of Donetsk and Luhansk after President Putin gave a speech in Moscow on Monday where he formally recognised the two breakaway republics in eastern Ukraine. Calling on Russia to de-escalate the situation and engage in diplomatic efforts to find a solution, Stoltenberg said “it’s never too late to not attack.” 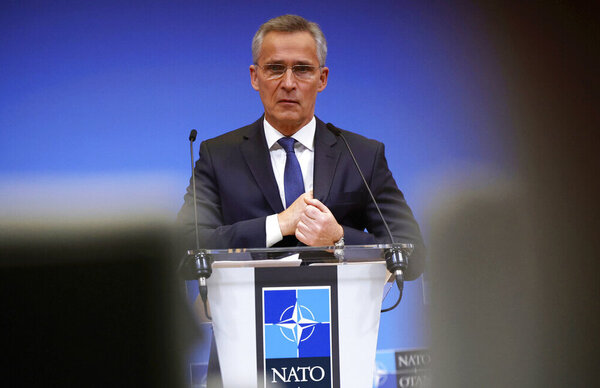 Hungary to deploy military to region near Ukrainian border

Hungary’s defense minister says the military will deploy soldiers and equipment to the region near the Ukrainian border to prepare for potential humanitarian and border protection operations.

Benko said that he believed further escalation of the conflict between Russia and Ukraine could bring armed activity all the way to Ukraine’s western border. He said Hungarian soldiers would need to be prepared for the possible arrival of Ukrainian refugees in the wake of a greater conflict.

Oil prices surged nearly 5% and stock prices dropped after Russian President Vladimir Putin recognised the independence of rebel-held regions of Ukraine on Monday evening. Meanwhile EU leaders say they need to do more to guarantee security of energy supplies with Energy Commissioner Kadri Simson saying “We are at a crossroad in EU energy security & need unity more than ever.”

President Biden to give live update on Ukraine-Russia situation

US President Joe Biden will give a live update to reporters in the East Room of the White House on the latest situation with Ukraine and Russia. The briefing is scheduled to start at 8pm CET.

The UN Security Council reacted to Putin’s announcements by holding a rare nighttime emergency meeting on Monday at the request of Ukraine, the US and other countries. At the same time, the White House issued an executive order to prohibit US investment and trade in the separatist regions.

Ukraine’s president, Volodymyr Zelenskyy, sought to project calm, telling the country: “We are not afraid of anyone or anything. We don’t owe anyone anything. And we won’t give anything to anyone.”

He said Kyiv “unequivocally qualifies the recent actions of the Russian Federation as a violation of the sovereignty and territorial integrity of our state” and said he now expects “clear and effective support steps from our partners.”

His foreign minister, Dmytro Kuleba, would be in Washington on Tuesday to meet with Secretary of State Antony Blinken, the State Department said.

“He told President Zelenskyy that the UK had already drawn up sanctions to target those complicit in the violation of Ukraine’s territorial integrity, and that those measures would come into force tomorrow,” Downing Street said in a statement.

“The Prime Minister also said he would explore sending further defensive support to Ukraine, at the request of the Ukrainian Government.” Johnson is set to chair a high-level security meeting early Tuesday morning to coordinate the UK’s response.

More criticism from the international community

In a joint statement on Monday evening, EU Commission President Ursula von der Leyen and Council President Charles Michel said the recognition was “a blatant violation of international law” and promised to impose more sanctions against those involved in Russia’s recognition of the two separatist regions.

White House spokesperson Jen Psaki said President Joe Biden “will soon issue an Executive Order that will prohibit new investment, trade, and financing” in the regions, or on anyone “determined to operate in those areas of Ukraine.” She said those measures would be separate from tougher sanctions the US is preparing in case of a Russian invasion.

Live: Invading Ukraine was Putin’s ‘plan all along’, Washington says

Study: More than 1 in 7 teens, adolescents in U.S., Canada have vaped…