A volunteer of the Ukrainian Territorial Defense Forces stands next to his APC in Kharkiv, Ukraine, Wednesday, March 16, 2022.

Thursday marks the start of the third week of war in Ukraine, after the invasion launched by Moscow on 24 February.

Thursday marks the start of the third week of fighting in Ukraine since Russian forces launched an invasion on 24 February. Moscow says it is not responsible for attacks on a theatre and swimming pool facility in the besieged southern Ukraine city of Mariupol where local authorities say more than a thousand civilians were sheltering. Ukrainian President Zelenskyy says the theatre is destroyed, and “the number of dead is not yet known.”  France, the UK and US have called for a United Nations Security Council meeting on Thursday to discuss Ukraine, ahead of a vote on a Russian resolution demanding protection for Ukrainian civilians in “vulnerable situations.” Britain’s UN mission says “Russia is committing war crimes and targeting civilians.” President Putin has spoken out on television to condemn Russians who don’t support his war efforts. “We will always be able to distinguish true patriots from scum and traitors and will simply spit them out” he said. The International Court of Justice, or ICJ, delivered a verdict on the Russia vs Ukraine case, ordering it to suspend its invasion.

Lithuania’s parliament has unanimously adopted a resolution calling for a no-fly zone over Ukraine, joining countries including Estonia and Slovenia in the appeal.

The resolution said a no-fly zone would allow United Nations peacekeepers to ensure the security of humanitarian corridors and the safety of Ukraine’s nuclear power plants and nuclear waste storage facilities.

Although Lithuania, Estonia and Slovenia are all members of NATO, the military alliance has categorically ruled out any role in setting up and policing a no-fly zone over Ukraine to protect against Russian airstrikes.

On Wednesday, NATO Secretary-General Jens Stoltenberg said “this can become even worse if NATO (takes) actions that actually turned this into a full-fledged war between NATO and Russia.”

Prime Minister Janez Jansa of Slovenia has publicly called for a no-fly zone and Estonia’s Parliament also has urged its 29 NATO partners to consider the same.

‘I knew it was the last lunch’: One refugee’s final day in Kyiv

The day before Russia invaded Ukraine, Iryna Zemlyana made herself a nice breakfast, went to her favourite restaurant and saw her closest friends.

She went to her office to get important documents and to the dentist to find out what to do about her braces during the war. Her dentist laughed when she asked if there was a plan.

But 34-year-old Zemlyana, who has been training journalists to brave tough war conditions for eight years during the war in Ukraine’s east, wanted to be prepared and knew the conflict would break out soon. 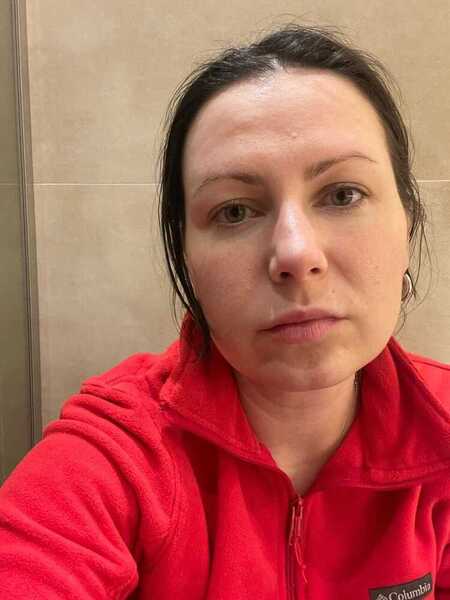 “The only word to describe what has happened today is genocide, said Mariupol’s mayor, Vadim Boychenko, who described the “horror” after a Russian bomb hit the city’s Drama Theatre.

Zelenskyy’s office did not report casualties for the latest strikes. They come amid rescue efforts in the city after a theatre where hundreds had been sheltering was destroyed Wednesday in what Ukrainian authorities say was a Russian airstrike.

“People are escaping from Mariupol by themselves using their own transport,” Zelenskyy’s office said, adding the “risk of death remains high” because of Russian forces previously firing on civilians.

Global economic growth could be more than 1 percentage point lower this year due to Ukraine war, OECD warns

Global economic growth could be more than 1 percentage point lower this year, due to the Ukraine war, the Organisation for Economic Co-Operation and Development (OECD) warned on Thursday.

Inflation is also likely to be higher than it would have been if the war had not broken out. It could be 2 percentage points higher in the euro area and nearly 2.5% higher globally.

“With Russia supplying around 16% of the world’s natural gas and 11% of oil, energy prices have jumped alarmingly,” the OECD said. Gas spot prices more than 10 times higher than a year ago in Europe.

Kremlin rejects court order to suspend its offensive in Ukraine

The Kremlin on Thursday rejected the decision of the International Court of Justice (ICJ), the UN’s highest court, to immediately suspend its invasion of Ukraine.

“We will not be able to take this decision into account,” Kremlin spokesman Dmitry Peskov told reporters.

He said that both Russia and Ukraine had to agree in order to implement the decision.

The ICJ had ordered Russia in a 13-2 decision on Wednesday to immediately suspend hostilities in Ukraine.

“The Russian Federation shall immediately suspend the special military operations it commenced on 24 February 2022,” the court’s president, US judge Joan E. Donoghue, said.

11:18Are you willing to pay higher energy bills if it means cutting off Russian gas and oil?10:51

Ukrainian authorities fear hundreds of civilians might be trapped in the rubble of a Mariupol theatre which was hit by a Russian airstrike on Wednesday afternoon.

A photo released by Mariupol’s city council showed an entire section of the large, 3-story theater had collapsed.

At least as recently as Monday, the pavement in front of and behind the once-elegant theater was marked with huge white letters spelling out “CHILDREN” in Russian, according to images released by the Maxar space technology company.

Rubble had buried the entrance to the shelter inside the theater, and it was not yet known how many people were killed or injured, Pavlo Kyrylenko, head of the Donetsk regional administration, said on Telegram.

Russian airstrikes also hit a municipal swimming pool complex in Mariupol where civilians, including women and children, had been sheltering, Kyrylenko said. “Now there are pregnant women and women with children under the rubble there,” he wrote, thought the number of casualties was not immediately known.

A satellite image of the Mariupol theatre from Monday appeared to show the word “children” written in large letters, in Russian, at the front and back of the building. 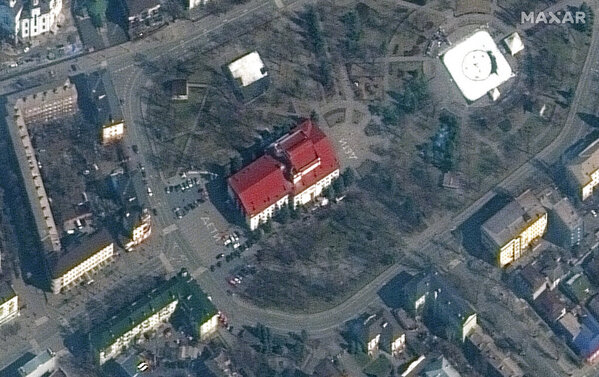 The war in Ukraine will significantly hamper Germany’s economic recovery and halve the expected GDP growth in 2022 to 2.1%, according to the Kiel Institute for the World Economy IfW on Thursday.

Germany’s GDP could be cut by “some 90 billion euros this year and next year” and “delay the return to pre-Covid levels” in the biggest EU economy until the second half of the year, economists say, predicting growth of 4% this year so far.

IfW is the first institution to publish an updated economic forecast for Germany since the Russian invasion which began on 24 February.

“Without the strong post-pandemic growth spurt, the European economy would contract this year” said Stefan Kooths, deputy director of the IfW.

Germany is indeed benefiting from “strong catch-up effects” linked to the lifting of most health restrictions” he added.

“The war is weighing on the economy through increased uncertainty, new tensions in supply chains and a further rise in the prices of raw materials.”

Ukraine war: Fears up to 300 died in Mariupol theatre attack as Biden visits…

Make your own fresh tomato sauce in under 30 minutes

Experts warn of nitazenes, a new street drug as deadly as…

Coronavirus: ‘I won’t go back to work until…