A bus carrying wounded service men from the besieged Azovstal steel mill in Mariupol drives under escort of the pro-Russian military. May 16, 2022.

After months of fighting, many of the last defenders of the steelworks in Mariupol were evacuated overnight, with the Ukrainian government saying they had fulfilled their mission. Hundreds were evacuated to Russian-held territory, including wounded, though some remain behind.

**Follow our live coverage below for more of the key events as they develop on Tuesday.
**

Hundreds of fighters, included wounded, evacuated from Mariupol steelworks, with the Ukrainian government saying they had fulfilled their mission.

The leader of a Turkish nationalist party that is allied with President Recep Tayyip Erdogan is expressing concern that NATO’s expansion to include Sweden and Finland will provoke Russia and cause an expansion of the war in Ukraine.

Devlet Bahceli, the leader of the Nationalist Action Party, on Tuesday told his party’s lawmakers that the most “logical” option would be for the two countries to be kept in “NATO’s waiting room.”

Bahceli says that “Sweden and Finland’s entry into NATO will mean the lengthening of the war in Ukraine and even its geographical expansion.”

Bahceli’s speech comes a day after Erdogan said Sweden and Finland should not be allowed in. Erdogan has cited the two countries’ perceived support for groups Turkey considers to be terrorists, refusal to extradite “terrorists” wanted by Turkey and arms export restrictions on Turkey.

Bahceli in his speech also accused the two countries of “aiding and abetting” Kurdish militants.

All 30 current NATO countries must agree to open the door to new members.

Russian-backed separatists said on Tuesday that 256 Ukrainian servicemen who had been holed up in Mariupol’s Azovstal steel plant “have surrendered” and that 51 were wounded.

This marked a very different tone to Ukraine’s announcements of the evacuation, in which officials stressed that the defenders of Mariupol had ‘fulfilled all their tasks’ and were being evacuated to Russian-held areas, and that an exchange would be worked out for their return home.

Ukraine’s military also said on Tuesday that it was working to evacuate all remaining troops from their last stronghold in the besieged port of Mariupol, ceding control of the city to Russia after months of bombardment.

All 30 current NATO members, among them Turkey, must agree to let the Nordic neighbours join. But Turkish President Recep Tayyip Erdogan has said they failed to take a “clear” stance against Kurdish militants and other groups that Ankara considers terrorists, and imposed military sanctions on Turkey.

However, Luxembourg’s long-serving Foreign Minister Jean Asselborn told Germany’s Deutschlandfunk radio on Tuesday that he suspects Erdogan is merely “pushing up the price” for the two countries’ membership. He said: “At the end of the day, I am convinced that Turkey can’t slam the brakes on this.”

Asselborn added that “this will take some time, I hope not too long.”

He pointed to Turkey’s removal in 2019 from the US-led F35 stealth fighter jet program and the possibility of Ankara getting F-16 fighter jets from the US.

The Vatican’s foreign minister, Archbishop Paul Gallagher, is heading to Kyiv this week as the Holy See seeks to balance its concern for Ukrainians with its efforts to keep open a channel of dialogue with Russia.

Gallagher is due to arrive Wednesday and meet Friday with Ukrainian Foreign Minister Dmytro Kuleba, a visit that was originally scheduled for before Easter but was postponed after Gallagher came down with COVID-19.

The trip comes as the Holy See toes a delicate line in trying to keep alive newly improved ties with the Russian Orthodox Church while offering support to the “martyred” Ukrainian faithful. At the same time, the Holy See is reconciling Pope Francis’ frequent denunciation of the weapons industry and “crazy” recourse to re-arming Ukraine with Catholic teaching that says states have a right and duty to repel an “unjust aggressor.”

“It has to be proportional,” Gallagher told RAI state television in announcing his trip. “Yes, Ukraine has the right to defend itself and it needs weapons to do it, but it has to be prudent in the way it’s done.”

Gallagher, a 68-year-old career Vatican diplomat from Liverpool, becomes the third papal envoy dispatched to the region by Francis, after two trusted cardinals went to Ukraine and bordering countries to assess the humanitarian needs of Ukrainian refugees and bring them the pope’s solidarity.

Francis has drawn criticism from some for refusing to condemn Russia or President Vladimir Putin by name, though he has stepped up his criticism of the “barbaric” war and recently met with the wives of two Ukrainian soldiers holding out at the besieged steel mill in Mariupol, a gesture of “our concern and participation in the suffering of these families,” Gallagher said.

Reuters captured images of the evacuation of Mariupol last night. 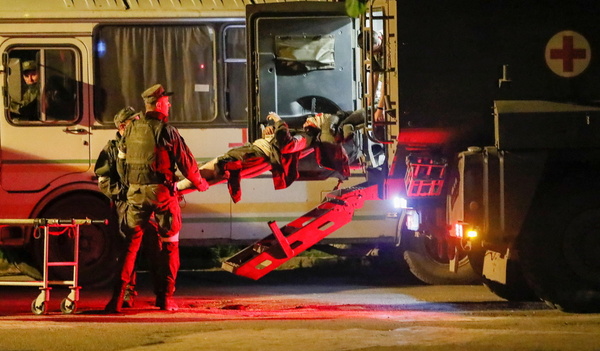 A wounded service member of Ukrainian forces from the besieged Azovstal steel mill in Mariupol is transported on a stretcher out of a bus, which arrived under escort of the pro-Russian military in the course of Ukraine-Russia conflict in Novoazovsk, Ukraine May 16, 2022. REUTERS/Alexander Ermochenko 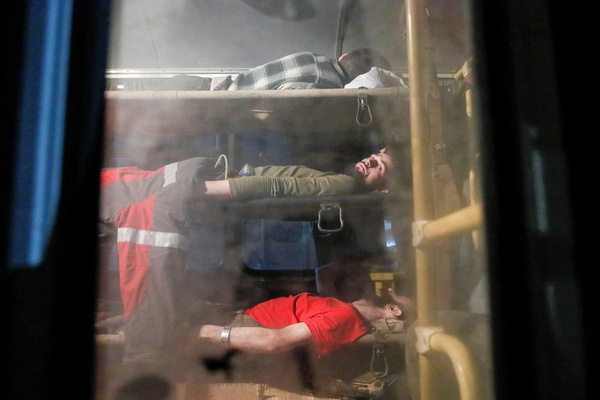 A bus carrying wounded service members of Ukrainian forces from the besieged Azovstal steel mill in Mariupol drives under escort of the pro-Russian military in the course of Ukraine-Russia conflict upon arrival in Novoazovsk, Ukraine May 16, 2022. REUTERS/Alexander Ermochenko 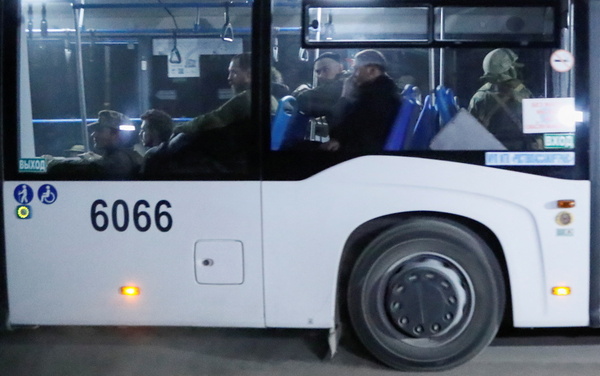 A bus carrying wounded service members of Ukrainian forces from the besieged Azovstal steel mill in Mariupol drives under escort of the pro-Russian military in the course of Ukraine-Russia conflict upon arrival in Novoazovsk, Ukraine May 16, 2022. REUTERS/Alexander Ermochenko

In its latest assessment on the war in Ukraine, Washington DC-based think tank the Institute for the Study of War’s (ISW) said that frictions between Russian occupation administrations and pro-Russian collaborators are growing in occupied areas of Ukraine.

The Zaporizhia Oblast Military Administration reported that Russian forces are having serious conflicts with collaborators due to interpersonal power conflicts, it said, adding:

“A well-known collaborator in Zaporizhia accused the Russian-installed governor of the area of stealing his 10,000 ruble compensation. Advisor to the Mayor of Mariupol Petro Andryshchenko additionally claimed that relatives of those mobilised into the forces of the Donetsk People’s Republic (DNR) are holding a mass protest against mobilisation in Donetsk City.

COP26: Boris Johnson invokes fall of the Roman Empire as he warns…