Live: Nearly two-thirds of Kyiv’s 3.5 million residents have now returned to the city

File picture of Ukrainian refugees walking along vehicles lining up to cross the border from Ukraine into Moldova.

With no major announcements from Russian President Vladimir Putin during yesterday’s Victory Day parade in Moscow, the war in Ukraine looks set to continue on in its current state, at least for the time being.

Nearly two-thirds of Kyiv’s 3.5 million residents have now returned to the Ukrainian capital, according to the city’s mayor, Vitali Klitschko, despite ongoing curfews and the dangers of missile strikes.

Meanwhile, German Foreign Minister Annalena Baerbock has pledged that the international community would hold to account those responsible for the killing of civilians in the Ukrainian town of Bucha.

Join us as we see how Tuesday unfolds in our live coverage below, and watch Euronews TV in the video player above.

Nearly two-thirds of Kyiv’s 3.5 million residents have now returned to the Ukrainian capital, according to Kyiv’s mayor, Vitali Klitschko.

The civilian death toll in Ukraine is likely ‘thousands higher’ than previous estimates, says the head of the UN human rights monitoring mission to Ukraine. The International Organisation for Migration (IOM) estimates that more than 8 million people were internally displaced in Ukraine as of May 3.

The Ukrainian military said Russian forces fired seven missiles from the air at Odesa on Monday night, hitting a shopping centre and a warehouse, killing one person and wounding five.

Ukrainian authorities estimate there are still 1000 fighters and 100 civilians entrenched in the Azovstal steelworks in Mariupol.

The bodies of 44 civilians have been found in the ruins of a building destroyed by Russian forces back in March, with the head of Kharkiv’s regional administration calling it a war crime.

German Foreign Minister Annalena Baerbock has become the first member of the German government to visit Ukraine since the Russian invasion. She visited Bucha, scene of Russian atrocities, and announced the reopening of the German embassy in Kyiv.

Hungary still opposes the EU’s proposed ban on Russian oil imports despite seven days of talks which so far have failed to resolve the issue. An EU videoconference scheduled for Tuesday has been postponed.

President Biden signed a bipartisan measure to reboot a World War II-era “lend-lease” program on Monday, at a time when the US Congress is poised to unleash billions more to help fight the war in Ukraine.

The German foreign minister announced on Tuesday the reopening of her country’s embassy in Kyiv, during a visit to the Ukrainian capital.

The embassy, which was closed shortly after the Russian invasion on 24 February, will be reopened initially “with a minimal presence”, Annalena Baerbock said at a press conference with her Ukrainian counterpart.

The Ukrainian government in turn welcomed Berlin’s “change of position” in its foreign policy towards Moscow since the war began.

“I would like to thank Germany for changing its position on a number of issues,” including its “traditional policy towards Russia,” Ukrainian Foreign Minister Dmytro Kuleba said.

The German minister’s visit to Ukraine — which also took in the town of Bucha, scene of Russian atrocities as troops withdrew from the area — is the first by a member of the German government since the Russian invasion (see earlier posts).

The Ukrainian military said Russian forces fired seven missiles from the air at Odesa on Monday night, hitting a shopping centre and a warehouse, killing one person and wounding five. 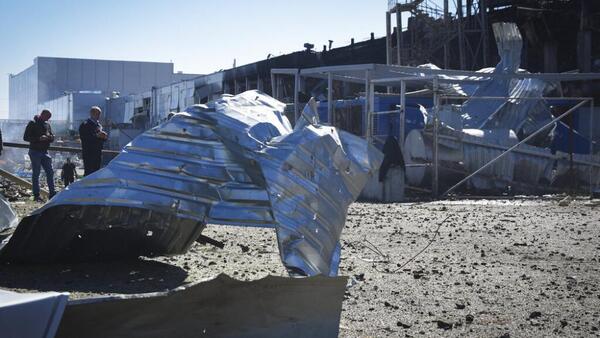 The UN’s top human rights body will hold a special session this week following a request from Ukraine to discuss the worsening human rights situation in the country, according to the Associated Press.

The 47-member Human Rights Council said that more than one-third of member states, the required minimum, backed the call that will pave the way for Thursday’s session at the UN’s European headquarters in Geneva.

Supporters included many Western countries, as well as Gambia, Marshall Islands and Mexico. A total of 55 countries, including observer states, backed the call, but the list could grow.

The governor of the eastern Luhansk region on Tuesday rejected Russia’s claims its forces have breached Ukrainian defences near the town of Popasna and moved the region’s administrative borders.

In a Telegram post, Serhiy Haidai described the claim as “fantasies.” He insists that “the defense is strong. There are no breakthroughs.”

The attacks resulted in the elimination of over “120 nationalists, 13 armoured and 12 vehicles of various purposes”, it said in an operational update. In addition, Russian operational-tactical and army aviation hit 16 areas with concentrations of Ukrainian manpower and military equipment overnight, it said.

Sleeping with lights off and closed blinds may protect your…

Russian military also hit 33 command posts, according to the update, 407 areas of manpower and military equipment concentration, as well as five ammunition and fuel depots near Nikolaev and Mirnyi, Nikolaev Region.

The claims could not be independently verified. Moscow considers the eastern Ukrainian region a sovereign state.

The European Union on Tuesday accused Russian authorities of carrying out a cyber attack against a network of satellites an hour before the invasion of Ukraine, to prepare the ground for its assault.

This is the first time that the EU has openly accused the Russian government of having carried out a cyberattack, said the head of European diplomacy Josep Borrell during a press conference in Brussels.

“The cyberattack took place an hour before Russia’s unprovoked and unjustified invasion of Ukraine on February 24, 2022, thus facilitating military aggression,” the EU said in a statement on behalf of its 27 member states.

Reuters has conducted an interesting interview with a former mercenary with the Kremlin-linked Wagner Group.

The mercenary, Marat Gabidullin, took part in missions on the Kremlin’s behalf in Syria and in a previous conflict in Ukraine, and had a lot to say about Russia’s military preparedness.

The Russian military’s failure to seize the Ukrainian capital was inevitable because in the preceding years they had never directly faced a powerful enemy, he said. “They were caught completely by surprise that the Ukrainian army resisted so fiercely and that they faced the actual army.”

He said people he spoke to on the Russian side had told him they expected to face rag-tag militias when they invaded Ukraine, not well-drilled regular troops. “I told them: ‘Guys, that’s a mistake’.”

Gabidullinm who quit the Wagner group in 2019, told Reuters that he received a call months before the current invasion from a recruiter who invited him to go back to fighting as a mercenary in Ukraine.

He refused, in part, he said, because he knew Russian forces were not up to the job, even though they trumpeted their arsenal of new weapons and their successes in Syria where they helped President Bashar al-Assad defeat an armed rebellion.

Lithuanian parliament recognises actions of Russians in Ukraine as genocide

On Tuesday, the Lithuanian parliament voted unanimously to recognise Russia’s war against Ukraine as genocide, according to LRT, Lithuania’s public service broadcaster.

The resolution, which stated that Russia’s armed forces and mercenaries have committed mass war crimes on Ukrainian territory, in particular in Bucha, Irpin, Mariupol, Borodyanka and Hostomel, passed with 128 votes in favour, none against and no abstentions.

Joining NATO is the best option for Finland to guarantee its national security, the Finnish Parliament’s defence committee said on Tuesday, ahead of Finland’s official decision on whether or not to join the Western defence union in the coming days.

Finland’s membership in the North Atlantic Treaty Organization (NATO) would significantly increase the deterrent for becoming a target of Russia’s aggression, the defence committee concluded in a statement.

Finland, which shares a 1,300-kilometre border and a difficult past with neighbouring Russia, is reconsidering its long-standing position to refrain from joining NATO in order to maintain friendly relations with its eastern neighbour.

Finland’s President Sauli Niinisto is expected to announce on Thursday his stance on joining NATO, a move that would mean a major shift of security policy for the Nordic country in the wake of Russia’s invasion of Ukraine.

The Parliament’s defence committee provided its view on the matter in response to the government’s white paper update of its foreign and security policy.

“Membership in NATO is the best solution for Finland’s security. It strengthens Finland’s national defence capability with the support of the union’s significant military resources,” the committee’s chairman and main opposition leader Petteri Orpo of the National Coalition party said.

While some Ukrainians are making their way back home, according to the International Organisation for Migration (IOM) more than 8 million people were internally displaced in Ukraine as of 3rd May, more than two months after the start of the conflict.

In total, the IOM estimates that 13.686 million people have been forced to flee their places of residence because of the Russian invasion, of which 8.029 million have moved elsewhere in Ukraine, the rest having fled the country.

Ukrainian ambassador: EU countries should be ready for ‘economic sacrifices’ to stop Russia