Russian troops are now in control of Europe’s largest nuclear power station, after attacking it overnight.

Shelling at Zaporizhzhya power station in the early hours of Friday morning set a training building alight, and while one of the reactors was hit it was not damaged. Officials say radiation levels are normal.

Ukraine and Russia have agreed to establish corridors for civilians to safely leave combat zones. The corridors will reportedly include cease-fires along the way. Humanitarian supplies could be delivered though the corridors, which were the Ukrainians’ main demand ahead of a second round of negotiations Thursday in Belarus.

Heavy fighting continues on the outskirts of Mariupol, a strategic port city on the Azov Sea; overnight explosions were heard in Kyiv as Ukraine’s air defence systems shot down Russian missiles, according to the city’s mayor; the Russian military says it now controls the Black Sea port of Kherson, a city of 280,000 people and the first major Ukrainian city to fall since the start of the war; the was more overnight shelling in the northern city of Chernihiv with officials reporting at least 33 civilians killed in a Russian bombardment of a residential area.

– Russian forces are now in control of Europe’s largest power station after an overnight attack.

– Shelling in the early hours of Friday morning did not damage a reactor, but sparked a fire in one building which is now out.

– Radiation levels are normal at the Zaporizhzhya power station, the largest in Europe.

– IAEA to hold press briefing about the attack, as Russian troops take control of Zaporizhzhya plant.

– The United Nations says 1 million people have fled Ukraine since the start of the Russian invasion, which amounts to more than 2% of Ukraine’s population.

– The US has announced a new round of sanctions targeting Russian interests while more of the world’s best known brands are pulling out of Russia or closing their operations there: including Apple, Mercedez-Benz, BP, Ikea, Volkswagen and its subsidiary Skoda Auto.

What you need to know about Europe’s biggest power station

The Zaporizhzhya nuclear power station in Ukraine is the biggest in Europe. It’s located in the south of the country on the Dnieper River and has a total capacity of almost 6,000 megawatts – or enough to supply electricity to around four million homes. Construction began on Zaporizhzhya in 1979 when Ukraine was still part of the Soviet Union. It first came online in 1985 There are now six Soviet-designed reactors on the site, the last of which was commissioned in 1995. These reactors have a lifetime of between 40 and 60 years, or possibly longer as technologies advance.In normal times Zaporizhzhya can produce about 20% of all Ukraine’s electricity needs and half of its nuclear energy. 08:12

City of Okhtyrka without heat or electricity after Russian air strike

A Russian air strike on Thursday destroyed the power plant in Okhtyrka, leaving the city without heat or electricity, the head of the region said on Telegram.In the first days of the war, Russian troops attacked a military base in the city, located between Kharkiv and Kyiv, and officials said more than 70 Ukrainian soldiers were killed.
“We are trying to figure out how to get people out of the city urgently because in a day the apartment buildings will turn into a cold stone trap without water, light or electricity,” Dmytro Zhyvytskyy said.07:42

The Director of the International Atomic Energy Agency will hold a press conference on Friday morning to give an update on the stiation at Ukraine’s Zaporizhzhya power station. The nuclear plant, Europe’s largest, was shelled by Russian forces in the early hours of Friday morning sparking a fire in one of the buildings. However the reactor itself was not hit, and local authorities said that measurements taken at 0700 EET on Friday morning showed radiation levels in the region “remain unchanged and do not endanger the lives and health of the population.” The fire has now been put out, and there are no reports of fatalities. IAEA head Rafael Grossi said he was “deeply concerned” about the situation at Zaporizhzhya in a tweet and appealed to both Russia and Ukraine to “refrain from actions that can put nuclear power plants in danger.” Ukraine’s President Zelenskyy accused the Russians of deliberately targeting the plant’s reactors using tanks with thermal imagine equipment. British Prime Minister Boris Johnson said he would call for an emergency UN meeting about the situation at the power station.

Helsinki train is a rare exit route for Russians to Europe

Trains linking St. Petersburg in Russia with the Finnish capital Helsinki are full for the next few days, a rare exit to the European Union for Russians who are able to leave. At Helsinki Central Railway Station, passengers on the morning train from St Petersburg say it as one of the last chances to get into the EU as air traffic is shut due to sanctions. “We decided to go back as soon as possible, because we don’t know what the situation will be in a week,” says Polina Poliakova, a Muscovite studying in Paris.
Traveling “is difficult now because everything is canceled”, explains Beata Ioukhtanova, her friend who studies with her in the French capital. The pair will now continue their journey by plane.
During the pandemic, the “Allegro” services which are jointly operated by Finnish and Russian train companies were suspended for long periods of time, and then only partly full once services resumed.On Saturday, two days after the start of Moscow’s assault on Ukraine, the number of passengers coming to Finland started to rise, while trains going in the other direction were only 30% full.”We can see in the luggage they carry that people are moving, that they are moving for good” says Topi Simola from Finnish rail operator VR. The Allegro is only available to Finnish citizens and Russians with valid Schengen visas. In addition, travelers must have received COVID vaccines recognised by the EU – not the Sputnik vaccine administered in Russia. Most of the passengers are therefore Russians who already live or work in Europe, like Maria, 14, and her mother Svetlana, who took the train to Finland after their flight was canceled on Sunday to return to Austria, where they live.

“Everyone was saying ‘I don’t know what to do'” says Maria as she got off the train.

“We first thought we should go through Turkey, but it’s much more expensive than Finland, so we’re in luck.”

VR would like to open the Allegro connection to other European Union nationalities, and to increase capacity.

“We know that there are tens of thousands of EU citizens still in Russia and we assume that many of them would like to return home,” says Mr Simola. 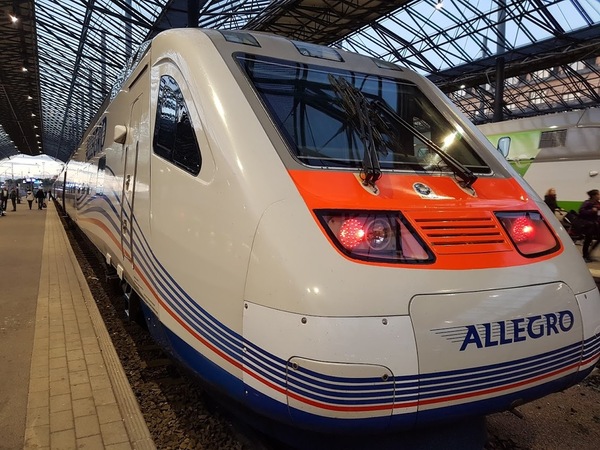 Facebook pages of several independent media sources were partly blocked to users in Russia on Friday morning, as authorities in Moscow tighten their grip on any information which might be critical.Access to Facebook in general was partially restricted, as were sites including Russian news outfit Meduza, Deutsche Welle, REF-RL and the BBC’s Russian-language service. Meanwhile Google Maps has stopped users adding comments, photos and videos on their mapping services in Russia, Ukraine and Belarus. TripAdvisor has stopped people adding comments to some hotels and restaurants in Russia. The move comes after both services faced a campaign from Ukrainian activists who wanted to use those services to let people in Russia have more information about the invasion of Ukraine. 06:45

A fire at a nuclear power station in Ukraine, the largest in Europe, is now out after overnight shelling by Russian forces. The fire started in one of the training buildings on the compound of the nuclear power station, not in the reactor building itself. “At 06:20 the fire in the training building of Zaporizhzhya NPP in Energodar was extinguished. There are no victims,” the State Emergency Service wrote on their social media accounts.Leading nuclear authorities were concerned – but not panicked – about the damage to the power station. The assault triggered phone calls between Ukrainian President Volodymyr Zelenskyy and British Prime Minister Boris Johnson, Canadian PM Justin Trudeau and US President Joe Biden; as well as German and Polish leaders. The US Department of Energy activated its nuclear incident response team as a precaution.
Trudeau described the attack on the nuclear facility “horrific” and “unacceptable” while Johnson said the Russian attack was “reckless.”In an emotional speech in the middle of the night, Zelenskyy said he feared an explosion that would be “the end for everyone. The end for Europe. The evacuation of Europe.”“Only urgent action by Europe can stop the Russian troops,” he said. “Do not allow the death of Europe from a catastrophe at a nuclear power station.”

The attack on the eastern city of Enerhodar and its Zaporizhzhya nuclear plant unfolded as the invasion entered its second week and another round of talks between the two sides yielded a tentative agreement to set up safe corridors to evacuate citizens and deliver humanitarian aid.Nuclear plant spokesman Andriy Tuz told Ukrainian television that shells were falling directly on the facility and had set fire to one of its six reactors. That reactor is under renovation and not operating, but there is nuclear fuel inside, he said.Firefighters cannot get near the flames because they are being shot at, he said, and Ukrainian Foreign Minister Dmytro Kuleba tweeted a plea to the Russians to stop the assault and allow fire teams inside.“We demand that they stop the heavy weapons fire,” Tuz said in a video statement. “There is a real threat of nuclear danger in the biggest atomic energy station in Europe.”The assault renewed fears that the invasion could damage one of Ukraine’s 15 nuclear reactors and set off another emergency like the 1986 Chernobyl accident, the world’s worst nuclear disaster, which happened about 110 kilometers north of the capital.
US Energy Secretary Jennifer Granholm tweeted that the Zaporizhzhya plant’s reactors were protected by robust containment structures and were being safely shut down.