Sasha, 50, waits for his dog Druzhok before crossing a bridge destroyed by the Russian army when it retreated from villages in the outskirts of Kyiv, Ukraine.

Russia’s war in Ukraine is now in its second month and even as Vladimir Putin’s forces retreat in the north, Ukraine and its allies have warned that the Kremlin could redeploy its forces to escalate in the east of the country.

The war has forced millions to flee their homes, creating Europe’s worst refugee crisis since World War II. Thousands of civilians and military personnel have been killed, and the Russian bombardments have left widespread devastation.

The invasion has also caused political and shockwaves around the world, deepening the rupture between Moscow and the West.

Here are the latest updates on the war:

Ukrainian President Volodymyr Zelenskyy warned that retreating Russian forces were creating a “complete disaster” outside the capital as they leave mines across “the whole territory”.The International Committee of the Red Cross said they would try once again to facilitate a safe passage out of Mariupol after the conditions forced them to turn around.The US announced they would provide an additional $300 million in military equipment to Ukraine.The secretary of Ukraine’s national security council has denied the country was responsible for a reported attack on a Russian fuel depot.

The former chief prosecutor of the International Criminal Court has called for an international arrest warrant to be issued for Russian President Vladimir Putin.

In interviews given to Swiss media to mark the release of her latest book, the Swiss lawyer who oversaw ICC war crimes investigations in Rwanda, Syria and the former Yugoslavia said there were clear war crimes being committed in Ukraine.

“I hoped never to see mass graves again,” she told the newspaper Blick. “These dead people have loved ones who don’t even know what’s become of them. That is unacceptable.”

Ukrainian photojournalist killed outside of Kyiv

A Ukrainian photojournalist was found dead outside of Kyiv, Ukrainian officials said.

The photojournalist had disappeared on March 13 in the region surrounding the capital Kyiv.

On April 1, his body was found near the village of Huta Mezhyhirska, said Andriy Ermak, an advisor to President Volodymyr Zelenskyy.

The Ukrainian NGO the Institute of Mass Information said the photojournalist was survived by his wife, four sons, and parents.

Russia’s top space official says the future of the International Space Station hangs in the balance after the United States, the European Union, and Canadian space agencies missed a deadline to meet Russian demands for the lifting of sanctions on Russian enterprises and hardware.

The head of Russia’s Roscosmos state agency told reporters on Saturday morning that the agency was preparing a report on the prospects of international cooperation at the station, to be presented to federal authorities “after Roscosmos has completed its analysis.”

Roscosmos chief Dmitry Rogozin implied on Russian state TV that the Western sanctions, some of which predate Russia’s military action in Ukraine, could disrupt the operation of Russian spacecraft servicing the ISS.

He stressed that the Western partners need the ISS and “cannot manage without Russia, because no one but us can deliver fuel to the station.”

Rogozin added that “only the engines of our cargo craft are able to correct the ISS’s orbit, keeping it safe from space debris.”

Turkey offers to evacuate civilians from Mariupol by ship

Turkey has offered to help evacuate civilians from the besieged Ukrainian port city of Mariupol by ship.

The Turkish defence minister said on Saturday that “we can provide ship support for the evacuation of civilians and injured Turkish and other countries’ citizens in Mariupol from the sea.”

State-run Anadolu Agency reported that Hulusi Akar said Turkey was coordinating possible evacuations with the authorities of the Russian Federation and Ukraine.

Mariupol, on the Sea of Azov, has seen some of the worst suffering of the war.

Pope Francis offered his most pointed condemnation of the war in Ukraine, calling out “infantile and destructive aggression” on Saturday during a trip to Malta.

In words that appeared to directly call out President Vladimir Putin, the pope said that “some potentate” caught up in “anachronistic claims of nationalist interests, is provoking and fomenting conflicts”.

“We had thought that invasions of other countries, savage street fighting and atomic threats were grim memories of a distant past,” the pope added in his speech. 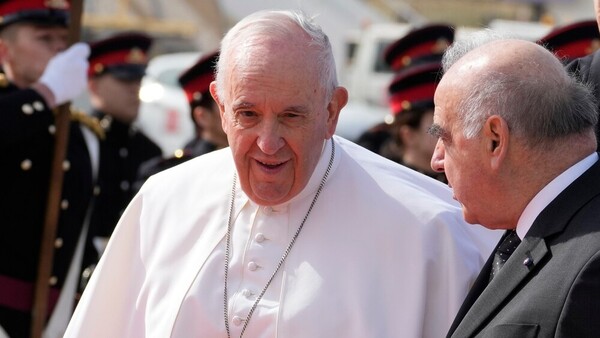 At least 33 people have died and another 34 were injured after a Mykolaiv government building was hit by a Russian strike last week, Ukraine’s emergency services said.

Bulgaria has expelled a Russian diplomat over accusations of spying who could not be charged because of his diplomatic immunity.

Bulgaria’s Foreign Ministry said in a statement late Friday that it declared a Russian diplomat “persona non grata” and gave him 72 hours to leave the country after it was informed by the prosecutor’s office that the diplomat had been involved in “unregulated intelligence activities.”

The expulsion comes as relations between Russia and NATO member Bulgaria, once Moscow’s closest ally in the now defunct Warsaw pact, have cooled down following Russia’s invasion of Ukraine.

Last month alone, Bulgaria expelled 12 Russian diplomats, accused Russia’s ambassador to Sofia of “undiplomatic, sharp and rude” comments made in public, and called back its ambassador from Moscow for consultations.

Russia’s “rapid retreat” from capital city Kyiv and Chernihiv is due to a change in tactic, said Ukrainian presidential advisor Mykhailo Podolyak on Telegram.

Russia is prioritising moving east and south to control the occupied territories there, he said.

Podolyak said he thinks Russia will leave all Ukrainian territories except the south and east, and will try to create a strong foothold in the east with air defence.

In its latest defence intelligence report, the UK ministry of defence said that Russian forces are reported to have withdrawn from Hostomel airport.

The defence ministry said that Russian forces were withdrawing in the vicinity of the capital city Kyiv.

They added that Ukrainian forces “secured a key route in eastern Kharkhiv after heavy fighting”.

Twelve years of Orban: How the EU has failed to rein in Hungary’s democratic backsliding

Leftover food safety: What to know