A military truck transports a platform with an Ukrainian self-propelled artillery vehicle in Donetsk region, Ukraine, on Monday, May 9, 2022.

With no major announcements from Russian President Vladimir Putin during yesterday’s Victory Day parade in Moscow, the war in Ukraine looks set to continue on in its current state, at least for the time being.

US President Joe Biden signed a bipartisan measure on Monday to reboot the World War II-era “lend-lease” program, which could funnel billions of dollars of weaponry to Ukraine.

Join us as we see how Tuesday unfolds in our live coverage below.

The bodies of 44 civilians have been found in the ruins of a building destroyed by Russian forces back in March, with the head of Kharkiv’s regional administration calling it a war crime.

Russian oil embargo could be agreed ‘within the week’, says French Secretary of State for European Affairs

Biden signs bipartisan measure to reboot World War II-era “lend-lease” program at a time when the US Congress is poised to unleash billions more to help fight the war in Ukraine.

Ukraine’s foreign minister, Dmitry Kuleba, has said that rather than survival, victory for Ukraine could now involve regaining territories in its far east.

North Korean state media said Kim in Monday’s message praised Russia’s victory in the “great war of justice to destroy fascism,” an apparent reference to World War II, and expressed hope that the countries would further develop their “strategic and traditional relations of friendship.”

The report by the Korean Central News Agency didn’t include any specific mention of Russia’s war on Ukraine. But it said Kim confirmed North Korea’s “firm solidarity” with Russia over its campaign to “root out the political and military threat and blackmail by the hostile forces and safeguard the country’s dignity.”

North Korea has repeatedly blamed the United States over the crisis in Ukraine, claiming that the “hegemonic policy” of the U.S.-led West is threatening global peace and stability.

Russia’s invasion of Ukraine has also created a favorable environment for Kim to push forward his weapons development as he tries to cement the North’s status as a nuclear power and negotiate a removal of crippling US-led sanctions from a position of strength. North Korea has conducted 15 rounds of missile tests in 2022 alone.

A Ukrainian official says authorities have found the bodies of 44 civilians in the rubble of a building destroyed by Russia in March.

Oleh Synehubov, the head of Kharkiv’s regional administration, made the announcement Tuesday via a message on social media. He said the five-story building had collapsed with the civilians inside.

He said, “This is another horrible war crime of the Russian occupiers against the civilian population!”

Synehubov did not identify specifically where the building was.

Russia has been holding Izyum, an eastern Ukrainian city in the Kharkiv region, as a key frontline node.

Moldova is Ukraine’s “most fragile neighbour” and the consequences of Russia’s nearby war are “too frightening to contemplate”.

They were the words of UN Secretary General Antonio Guterres during a visit to Chisinau on Monday.

The UN chief’s visit to Moldova — not a member of NATO and one of Europe’s poorest countries — follows a series of unsettling incidents that have rocked Moldova’s pro-Russia breakaway region of Transnistria.

On Friday, police in Transnistria said explosive devices were dropped from a drone leaving one-metre-deep craters near a village.

“I am deeply concerned about the continuation and possible spread of the war Russia is waging in Ukraine,” Guterres said, adding that Moldova’s sovereignty and territorial integrity “must not be threatened or undermined”. 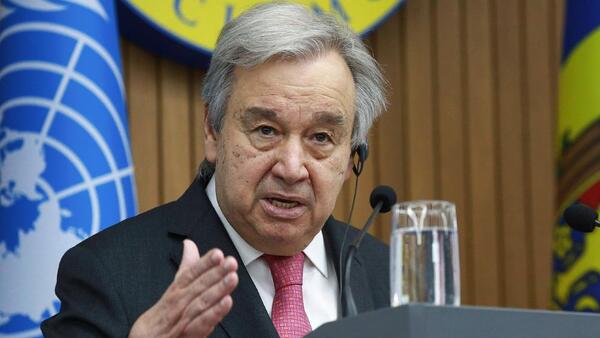 Russian oil embargo could be agreed ‘within the week’, says French Secretary of State for European Affairs

An agreement on a proposed EU embargo on Russian oil, currently blocked by Hungary, is possible “within the week”, French Secretary of State for European Affairs Clément Beaune said on Tuesday.

Don’t Consume It More Than 4 Days: This Mixture Will Help…

“I think we can have an agreement within the week, we are working hard on it. It’s probably a matter of days,” Beaune told LCI channel.

Von der Leyen had reported “progress” after a meeting with Orban in Budapest on Monday.

Hungary is asking its EU partners for guarantees on its energy supplies to agree to a sixth package of sanctions against Moscow, which include a halt to Russian oil purchases.

The agreement of all 27 member states is required for the adoption of sanctions. Five rounds of sanctions have already been agreed against Russia since its invasion of Ukraine on 24th February.

At least 100 civilians remain in a steel works that is under heavy Russian fire in the southern Ukrainian city of Mariupol, an aide to the city’s mayor said on Tuesday.

“In addition to the military, at least 100 civilians remain in the (Azovstal) shelters. However, this does not reduce the density of attacks by the occupiers,” mayoral aide Petro Andryushchenko wrote on the Telegram messaging app, according to Reuters.

The Ukrainian military is warning that Russia could target the country’s chemical industries.

The claim by Ukraine’s general staff wasn’t immediately explained in a report Tuesday. However, it comes after oil depots and other industrial sites have been targeted by Russian shelling in the war.

The military said, “The possibility of sabotage at the chemical industry of Ukraine with further accusations of units of the armed forces of Ukraine is not ruled out.”

Russian forces continue to face widespread force generation challenges, according to the latest assessment by the Washington DC-based Institute for the Study of War.

On 9th May a senior US defense official stated that the US has not observed any indicators of a “new major Russian mobilization” and that members of the private military company Wagner Group “urgently” requested hundreds of thousands of additional troops to reinforce Russian efforts in Donbas, it said.

At the same time, Russian troops in Ukraine continue to display low morale and poor discipline as fighting in many areas has stalled out against Ukrainian resistance.

According to Reuters, German officials are quietly preparing for any sudden halt in Russian gas supplies with an emergency package that could include taking control of critical firms, at least according to three people familiar with the matter.

Russian gas accounted for 55% of Germany’s imports last year, and Berlin has come under pressure to unwind a business relationship that critics says is helping to fund Russia’s war in Ukraine, reports the news agency.

Germany has said it wants to wean itself off Russian supplies but expects to be largely reliant on Moscow for gas until the middle of 2024.

It remains unclear whether an abrupt halt would happen, and the officials told Reuters that Germany wanted to avert an escalation, such as by backing a European gas embargo, having already supported sanctions against Moscow on coal and oil.

But they now fear Russia could cut off gas flows unilaterally and want to be able to cope if it does.

While a broad framework is in place, details of how the plan would put into action are now being thrashed out, the officials said.

The European Bank for Reconstruction and Development (EBRD), which is holding its annual general meeting this week, has sharply worsened its economic contraction forecast for Ukraine.

It now expects a brutal contraction of 30% of the Ukrainian economy this year, instead of 20% expected in March, at the beginning of the Russian offensive.

The international organisation anticipates a 10% contraction of the Russian economy, which has been hit by Western sanctions and the cost of its war in Ukraine.

For Ukraine, the contraction is “probably the worst since the Second World War”, noted Beata Javorcik, chief economist of the organisation, in an interview with AFP.

As for Russia, the expected contraction of 10% is equivalent to that observed by “Western countries at the height of the covid pandemic,” she added.

The organisation, which was founded in 1991 to help countries of the former Soviet bloc transition to a market economy, has since expanded its scope to include countries in the Middle East and North Africa.

Men with higher testosterone likely to have more than one sexual…

Men who tend to worry have increased risk factors for heart disease,…

Woman banned from cruise after ‘dangerously posing’ on…

Mafia fugitive arrested after being spotted on Google Street…