Following the reports of Moscow having to reactivate its T-62 tanks — Soviet-era armour introduced in 1961 — Ukrainian officials stated its forces destroyed about 30% of Russia’s more modern ones, a figure that is only expected to increase according to Interior Ministry advisor Viktor Andrusiv.

Meanwhile, reports from Sievierodonetsk claim that the Ukrainian forces are in a “tough position”, with the fiercest fighting taking place in the outskirts of the only Kiyv-controlled city in the Luhansk region.

Spain’s political stalemate comes to a climax this…

Follow the latest developments on Sunday in our live blog below, or watch our live coverage in the player above:

German Chancellor Olaf Scholz and French President Emmanuel Macron held a telephone conversation with Vladimir Putin on Saturday, calling for “serious direct negotiations” with Kyiv and the release of Ukrainian soldiers who surrendered at Azovstal.

Some 30% of Russia’s more modern tanks have been destroyed in Ukraine while about 30,000 soldiers were killed, according to Kyiv officials. The Kremlin has not commented on these figures or made its own casualty reports.

In Lithuania, ordinary citizens rallied around a donation drive to buy a Bayraktar drone for the Ukrainian forces, with the €5-million goal met in less than four days.

EU representatives will discuss on Sunday a solution to unblock the bloc’s sixth package of sanctions against Russia — a key measure including an oil embargo by the end of the year, sources in Brussels said.

The new sanctions are blocked by Hungary, a landlocked country that relies on oil from Russia through the Druzhba pipeline — a Warsaw Pacte-era project — covering two-thirds of its consumption.

Budapest has deemed the proposal of a two-year derogation insufficient and has demanded at least four years and nearly €800 million in EU funding to adapt its refineries.

The solution under discussion in Brussels on Sunday would be to exclude Druzhba from the oil embargo and limit sanctions to oil supplies by ship. Two-thirds of Russian oil supplies to the EU are transported by tanker and one third by the Druzhba pipeline.

This proposal, initiated by the French EU Presidency and the European Council, would allow the 6th set of EU sanctions under discussion since early May to go ahead.

Occupied Kherson to decide on joining Russia ‘closer to next year’

Moscow-loyal authorities in Kherson, occupied by the Russian forces in early March, say that the region will decide on joining Russia later in the year as fighting is impacting the timing.

Kirill Stremousov, the Russian-appointed head of the region, said that the occupying forces have to “restore order” first.

Ukrainian authorities claim that some 45% of the city’s population of almost 300,000 have left since the southern port came under Russian control.

In the meantime, the rouble was introduced as the official currency and the region has switched to Moscow time.

It is widely expected that the region will proclaim independence after a referendum, similar to DNR and LNR in the Donbas.

Invading forces appear close to seizing all of the Luhansk region, one of the more modest war goals the Kremlin set after abandoning its assault on the capital, Kyiv, in the face of Ukrainian resistance.

Russia’s defence ministry said its troops and allied separatist forces were in full control of Lyman, the site of a railway junction west of the Siverskyi Donets River in the Donetsk.

Sievierodonetsk, some 60 km northeast of Lyman on the eastern side of the river and the largest Donbas city still held by Ukraine, was under heavy assault.

“The situation has extremely escalated,” said Serhiy Haidai, the governor of Luhansk.

The shelling was so intense it was not possible to assess casualties and damage, though two people were killed on Saturday and 13 more buildings in the city were destroyed, he said.

Hundreds of Lithuanians have chipped in together to buy an advanced military drone for Ukraine in its war against Russia in a show of solidarity with a fellow former Soviet Union country.

The target of €5 million was raised in just three and a half days — largely in small amounts between €5 and €100 — to fund the purchase of a Byraktar TB2 military drone, according to Laisves TV, the Lithuanian internet broadcaster that launched the drive. 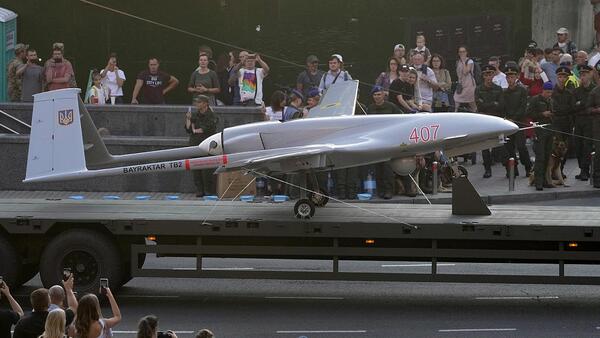 Lithuanians collect €5 million to buy a Bayraktar drone for Ukraine

Russian gas producer Gazprom said on Sunday its supply of gas to Europe through Ukraine via the Sudzha entry point stood at 44.1 million cubic metres (mcm), up from 43.96 mcm on Saturday.

An application to supply gas via another major entry point, Sokhranovka, was rejected by Ukraine, Gazprom said.

“The coastal defence of our country will not only be strengthened by Harpoon missiles – they will be used by trained Ukrainian teams,” Reznikov wrote on his Facebook page.

He said Harpoon shore-to-ship missiles would be operated alongside Ukrainian Neptune missiles to defend the coast, including the southern port of Odesa.

EU leaders are struggling to pass a Russian oil sanctions package. Why?

Playing the number 9 role: How important is it in modern…