Ukrainian Territorial Defence Forces members train on the outskirts of Odesa on 24 May, 2022

Ukrainian President Volodymyr Zelenskyy strongly rebuffed those in the West who have suggested Ukraine cede control of areas occupied by Russian forces for the sake of reaching a peace agreement.

In his nightly address, Zelenskyy said that the “great geopoliticians” who suggest this are disregarding the interests of “the millions of those who actually live on the territory that they propose exchanging for an illusion of peace.”

Meanwhile, fighting is intensifying around four cities in eastern Donbas, with Ukraine’s President Volodymyr Zelenskyy accusing Russia of throwing the full might of the Russian army against the cities of Liman, Popasna, Sievierodonetsk and Sloviansk.

Follow the latest developments in our live coverage below, or watch our live program in the player above.

Russia is advancing aggressively in the east and Ukraine needs more weapons, says President Zelenskyy in his nightly address.

Ukrainian Foreign Minister Dmytro Kuleba says NATO has done “absolutely nothing” about the Russian invasion of his country, while the EU was taking “revolutionary decisions” — a perception of the two organisations that have changed dramatically in Ukraine since the Russian invasion began on 24 February.

Ukraine and the US have strongly criticized a Russian plan to fast-track Russian citizenship for people from two southern regions of Ukraine now under their control.

Russia is ready to set up a corridor for ships carrying food to leave Ukraine, Russian Ministry of Defence said.

Italy and Hungary are urging a truce and peace talks, at odds with the EU’s hard line against Moscow, agencies report.

Svetlana peers over the balcony of her new home onto the empty square in Aguilafuente, a village of barely 600 inhabitants in the depths of Castilla y León.

The once-thriving heartland of Spain is now scattered with deserted and slowly emptying villages, spread across sweeping, arable plains.

“Jesus has brought me to paradise,” Svetlana says just as her younger son Miroslav, 7, bursts into tears for the fifth time in the space of an hour.

It’s better than the bunker that was the family’s home back in March, in Sarata, Ukraine after the war broke out. 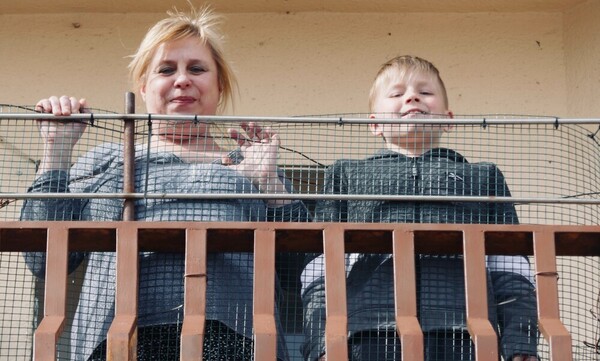 Svetlana and her son Yaroslav on their balcony in Aguilafuente, Spain. Euronews

The boys now go to the village school, boosting its student body to 38. On Sundays, they go to mass and join locals for an aperitivo at the bar in the square.

But it’s been a difficult adjustment as they speak no Spanish and the boys struggle to fit in. “It’s not a change they chose and they’re still resistant to it,” said the boys’ teacher, María Jesús Garrido.

German Chancellor Olaf Scholz said he was “convinced” on Thursday that Russia would not win the war in Ukraine, adding that President Vladimir Putin would not be allowed to “dictate” peace.

“Putin must not win his war. And I am convinced of it: he will not win it,” said Scholz during a speech delivered at the meeting of the World Economic Forum in Davos, Switzerland.

Putin “has already missed his strategic objectives,” Scholz estimated, judging that an “invasion of the whole of the Ukraine” seems “more distant today than at the start of the offensive”.

“We are not doing anything that can bring NATO into the war because that would mean a direct confrontation between nuclear powers,” he said.

But “it’s about making Putin understand that he can’t dictate peace. Ukraine won’t accept it, and neither will we,” he said.

“For me, it is clear that Putin will only seriously negotiate on peace if he realises that he cannot break the resistance of Ukraine,” the German chancellor added.

A giant work of street art of a Saint with an anti-tank weapon has emerged on a multi-storey building in Kyiv.

The graffiti dubbed “Saint Javelin” first appeared on Thursday in the Ukrainian capital.

Kailas-V art group, which is behind the mural, said the graffiti was “designed to fundraise money for Ukraine” as it continued its fight against the Russian invasion.

Spokesperson Yana Volk said that $2 million had been raised so far.

On Tuesday, artists were seen working on the mural.

Volk said that a projector is used in the evenings to help with the sketch of the 160-square-metre big graffiti.

‘I saw that she was falling’, Bucha resident says of her mother being shot

Tetiana, a 20-year-old resident of Bucha, Ukraine, saw her mother being shot by a sniper in front of her and her father.

“I heard a very loud shot and my mother fell,” she said.

The city of Bucha in the region surrounding the capital Kyiv was one of the places where civilians were found lying dead on the street and mass graves were uncovered.

“I cannot keep silent”, she says. “I want the world to know what happened. Maybe one day we will know who did it. And so there will be justice.”

Her testimony is part of the Euronews Witness documentary which you can watch in full here.

The General Staff of the Ukrainian military said Thursday that the Russian forces have continued attempts to press their offensive in several sections of the frontline in the east and also launched missile and air strikes at infrastructure facilities across the country.

His claims couldn’t be independently verified.

In his nightly address, Ukrainian President Volodymyr Zelenskyy strongly condemned suggestions that Ukraine should cede some of its territories to Russia in order to negotiate a peace deal.

Zelenskyy was particularly critical of the former US Secretary of State Henry Kissinger, who said in Davos that Kyiv should cede the likes of the Donbas and Crimea in order to bring the war to an end.

“Kissinger emerges from the deep past and says that a piece of Ukraine should be given to Russia. So that there is no alienation of Russia from Europe,” Zelenskyy said.

“It seems that Mr. Kissinger’s calendar is not 2022, but 1938, and he thought he was talking to an audience not in Davos, but in Munich of that time.”

Moscow authorities have extended the current school year in Mariupol until the end of the summer in order to prepare Ukrainian schoolchildren for the Russian curriculum, mayor’s advisor Petro Andriushchenko said on Telegram.

“The occupiers have announced the extension of the school year until 1 September. No holidays,” he said, according to Ukrainska Pravda.

“Their main goal is to de-Ukrainianise schoolchildren and to prepare them for the Russian curriculum they will have to study next school year.”

“Throughout the summer, they will have to study Russian language, literature, history, and maths in Russian,” Andriushchenko said.

Mariupol is considered to be under complete control by Russian troops since last week when the last Ukrainian soldiers surrendered from the Azovstal steel mill.

In Zaporizhzhia, Russian troops bring in ‘an echelon’ of outdated T-62 tanks

An echelon of obsolete T-62 tanks “which the Russians had taken out of storage” arrived in Melitopol on Wednesday night, Zaporizhzhia region’s military administration said on Telegram.

The T-62 is a Soviet-era main battle tank first introduced in the early 1960s. Although Russia inherited some 2,000 tanks of this particular model after the breakup of the Soviet Union, all were thought to have been scrapped.

“Armoured personnel carriers are stationed at virtually almost every intersection, according to local residents.”

The local authorities fear looting and have warned the local residents to be cautious. The Russian forces are also reportedly tasked with issuing Russian documents, including passports, to the Ukrainian locals.

“They have begun to prepare infrastructure and staff for the distribution of Russian passports to residents of the Zaporizhzhia region,” the military administration stated.

The ferocity of Russian air and artillery attacks on and around Sievierodonetsk suggests that Moscow forces are preparing for an offensive and a heavy battle in a bid to take control of the eastern Ukrainian city, the Institute for the Study of War said.

The strategically important city on the Siversky Donets river is considered to be the next big target after the fall of Mariupol, but previous Russian attempts to seize it have so far failed.

The institute’s Wednesday assessment stated that the Russian troops “may need to conduct a ground offensive on Sievierodonetsk in the upcoming days to maintain their pace after committing a significant portion of personnel, artillery, aviation, and logistics to the front.”

Sievierodonetsk and the nearby city of Lysychansk are the largest remaining settlements held by Ukraine in the Luhansk region. The region is “more than 90%” controlled by Russia, regional governor Sergiy Haidai said.

The road between Lysychansk and the city of Bakhmut to the southwest is widely considered crucial to keeping Ukrainian troops in the area supplied.

Haidai said it was “constantly being shelled” and that Russian sabotage and reconnaissance teams were approaching the area.

Live: Ukraine will not cede territories to Russia to reach peace,…

Advising both Chinese state companies and the Pentagon,…