Demonstrators hold posters during an anti-war protest in Tbilisi, Georgia, Sunday, May 8, 2022, a day before Russia celebrates WW2 Victory Day

Vladimir Putin cast Moscow’s military action in Ukraine as a forced response to Western policies, at the annual Victory Day parade commemorating the victory over Germany in the Second World World War.

But the Russian president didn’t announce a scaling up of Russian military operations, or a general mobilisation.

Ukraine’s President Volodymyr Zelenskyy, meanwhile, said that Ukraine will not let Russia “own the victory over Nazism” in 1945, highlighting his own country’s role in it.

Russia celebrated the defeat of Nazi Germany with a large-scale military parade in Moscow’s Red Square earlier today. See our coverage of the event here.

In a speech at the parade, President Vladimir Putin cast Moscow’s military action in Ukraine as a forced response to Western policies. However, despite some fears, he didn’t announce a scaling up of Russian military operations or a general mobilisation.

Ukraine will not let Russia “own the victory over Nazism” in 1945, Ukrainian President Zelenskyy said Monday, highlighting Ukraine’s own role in the victory. “We won then, we will win now,” he added.

Russia’s ambassador to Poland was hit by red paint as he went to lay flowers at a cemetery in Warsaw where Red Army soldiers killed during WWII are buried.

Meanwhile, European Council President Charles Michel was forced to seek shelter during a surprise visit to Odessa, as missiles hit the nearby area.

Russian forces have pushed forward in their assault on Ukraine, seeking to capture the crucial southern port city of Mariupol.

Meanwhile, the bombing of a school used as shelter in eastern Ukraine has left more than 60 feared dead, with Russia condemned for the attack.

Russia’s ambassador to Poland was hit with red paint thrown as he prepared to mark a World War II anniversary in Warsaw. 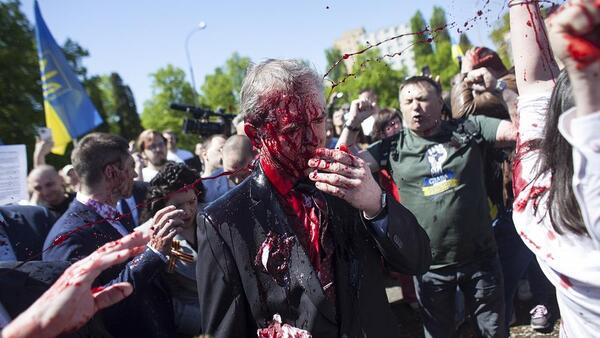 Sergey Andreev had planned to pay tribute to Soviet soldiers at a Warsaw cemetery as Russia marks Victory Day.

Azovstal, a vast complex of building and underground tunnels, is the last holdout for Ukrainian troops in Mariupol, whose capture would link Russian-seized areas in southern and eastern Ukraine and cut Ukraine off from the Azov Sea.

Putin has already declared victory in Mariupol but control of the steel plant would be a symbolic achievement on the 75th day of a war that has cost many Russian lives and isolated its economy, but failed to capture any major city.

Putin had told his defence minister not to storm Azovstal to avoid loss of Russian lives but Ukraine’s defence ministry said on Monday Russian forces backed by tanks and artillery were conducting “storming operations”.

Moscow has denied previous Ukrainian allegations of storming the complex, where civilians have also been sheltering.

In a Twitter post, von der Leyen said that she was looking forward to receiving the answers to the EU membership questionnaire from Ukraine, and that the European Commission would aim to deliver its opinion as soon as June.

On a surprise visit to Odesa on Monday European Council President Charles Michel was forced to seek shelter, an EU official said.

According to this source, during a meeting between Michel and Ukrainian Prime Minister Denys Chmygal the participants had to interrupt their discussion to take shelter, because of missile strikes against the region.

Charles Michel for his part wrote on Twitter that he had come to Odesa to celebrate Europe Day. “You are not alone. The EU is on your side,” he said.

According to the European official, Michel also noted during his visit the impact of the war on global supply chains, particularly with regard to cereals, of which many tons are blocked in the port of Odesa due to the Russian blockade of the Black Sea.

On Monday Ukrainian President Volodymyr Zelenskyy announced that he had held a videoconference with the president of the European Commission, Ursula von der Leyen, where they discussed Ukraine’s steps to becoming a candidate country for membership of the European Union.

Russian satellite television menus were altered on Monday to show viewers in Moscow messages about the war in Ukraine: “You have blood on your hands”, according to screenshots obtained by Reuters.

“You have the blood of thousands of Ukrainians and hundreds of dead children on your hands,” said one slogan.

“The TV and the authorities are lying. No to war.”

The slogans appeared just before the Victory Day parade on Red Square at which President Vladimir Putin compared the war in Ukraine to the Soviet battle to defeat Adolf Hitler in World War Two.

A Russian news website also showed anti-war material that was deeply critical of Putin. It was not immediately clear how the negative articles appeared. They swiftly disappeared.

Kyiv has hit out at German police after officers in Berlin confiscated a huge Ukrainian flag that was unfurled at the Soviet Memorial in the German capital on the eve of Russia’s Victory Day, which marks its defeat of Nazi Germany during World War II.

Officials in Germany said neither Russian nor Ukrainian flags were allowed to ensure commemorations stayed peaceful.

“Berlin made a mistake by banning Ukrainian symbols. It is deeply wrong to treat them on an equal footing with Russian symbols. It is an attack on all those who are currently defending Europe and Germany against Russian aggression.”

Brandenburg Gate to be lit up with colours of Ukrainian flag

The German government says Berlin’s iconic Brandenburg Gate is one of many prominent buildings across Europe that will be illuminated Monday in the yellow and blue colours of the Ukrainian flag.

Government spokesman Wolfgang Buechner told reporters in Berlin that the decision to do so was taken some time ago and that projecting the Ukrainian flag onto the Brandenburg Gate was a “sign of solidarity” to show that the European Union is on the side of Ukraine.

Around 200 take part in pro-Russian march in Belgrade

About 200 people took part in a parade of the “Immortal Regiment” organised by the Russian Embassy in Belgrade on Monday, to mark the victory over Nazi Germany in 1945.

The participants marched in silence, periodically broken by “hurrahs”, carrying portraits of their loved ones who fell in the fighting.

At the head of the column one individual carried a large letter “Z”, a symbol of the Russian troops engaged in the invasion of Ukraine. Another carried a life-size cardboard portrait of Russian President Vladimir Putin.

Others waved Russian flags, as well as Soviet-era flags.

The parade went to the cemetery of the liberators in Belgrade, where the representatives of Russia, Belarus, Kazakhstan, Azerbaijan and Serbia laid wreaths. Those from Ukraine had done so a day earlier.

“I came to honour the memory of my father who participated in the liberation of Belgrade,” said Nebojsa Radic, a 70-year-old pensioner from Valjevo.

“It will last a bit longer but I hope we will get real peace like our ancestors,” he said, referring to the conflict in Ukraine.

In its latest daily briefing, Russia’s Defence Ministry claims to have destroyed two command posts and one battery of Grad rocket launchers near Popasnaya, as well as a US-made counter-battery radar station near Zolotoye.

In addition, it claimed that tactical and army aviation had neutralised 52 sites with manpower or military equipment concentrations, as well as an ammunition depot near Glukhov.

The claims could not be independently verified.

Brains shift in adolescence to tune out parents’ voices

As Biden battles COVID, some health issues of past US…

Tieless Pedro Sánchez asks Spaniards to ditch the tie to…