A man has been rescued from a cave system in the Brecon Beacons after getting injured and being stuck for two days.

Rescue workers pulled the man out of Ogof Ffynnon Ddu near Penwyllt on Monday evening in what is believed to be the longest stretcher carry in British cave rescue history.

The caver in his 40s is alive after his 54-hour ordeal and was taken to hospital in an ambulance. Rescuers say he is in good condition. 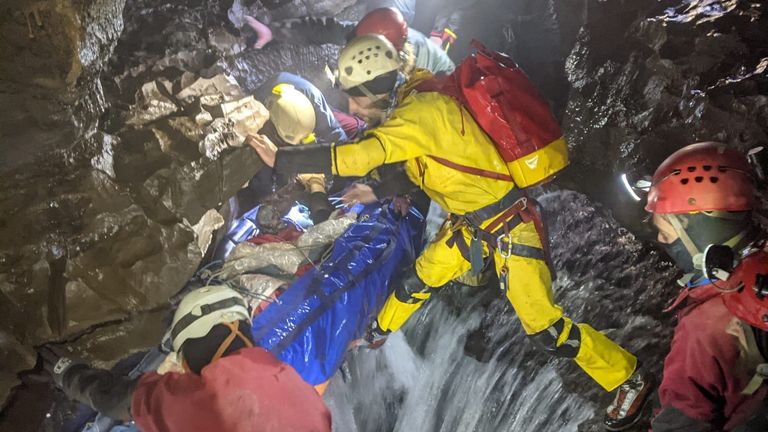 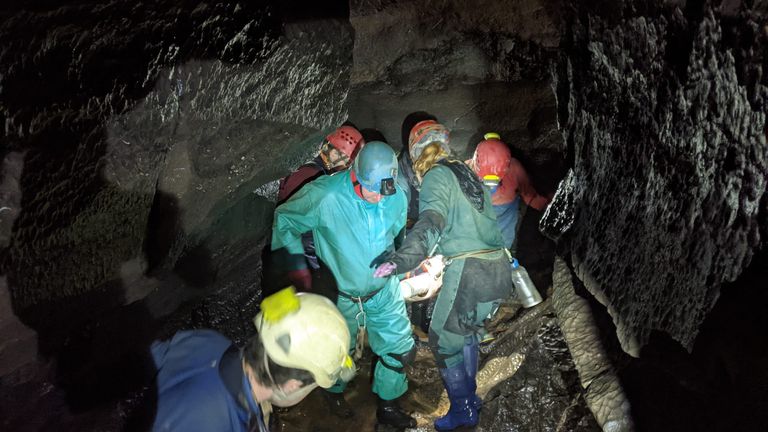 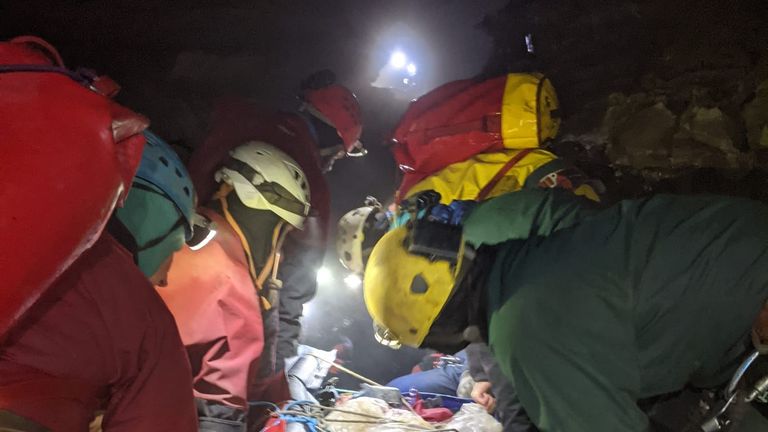 The South and Mid Wales Cave Rescue Team said the man fell while caving in Ogof Ffynnon Ddu near Penwyllt on Saturday.

He was unable to climb out because of the injuries he suffered in the fall.

His injuries are not thought to be life-threatening, but are believed to include a broken jaw, leg, and spinal injuries.

The rescue team added: “The extraction of an injured caver from such a complex cave system creates many challenges including negotiating small tunnels, climbs, rivers and continuously uneven ground.”

Sky News reporter Becky Johnson witnessed the moment he was brought to the surface on a stretcher in dark and wet conditions.

There were tense moments as the rescue teams waited for the man to emerge from the cave.

In the darkness they lined up either side of the small entrance in the hillside.

This was what they had been hoping for since their mission began nearly 60 hours earlier.

An orange tarpaulin was wrapped around the stretcher as it was brought out – the man carefully lifted into a mountain rescue ambulance.

Only once he was he was safely on board did the team allow themselves to celebrate – spontaneous applause for a job well done.

Exhausted, they made their way through the rain back down the mountain. The relief palpable.

As the man was taken away to hospital to get treatment for his injuries they allowed themselves to relax and remark on how well he’d coped with his ordeal.

Peter Francis, of the South Wales Caving Club (SWCC), thinks it was the longest rescue mission in a cave in Britain.

“To actually carry somebody in a stretcher, this is a 60-hour job. It’s unbelievable,” he told Sky News.

“It’s involved most of the rescue teams in Britain and the way they’ve worked together, meshed together – I just feel so proud of all of them.” 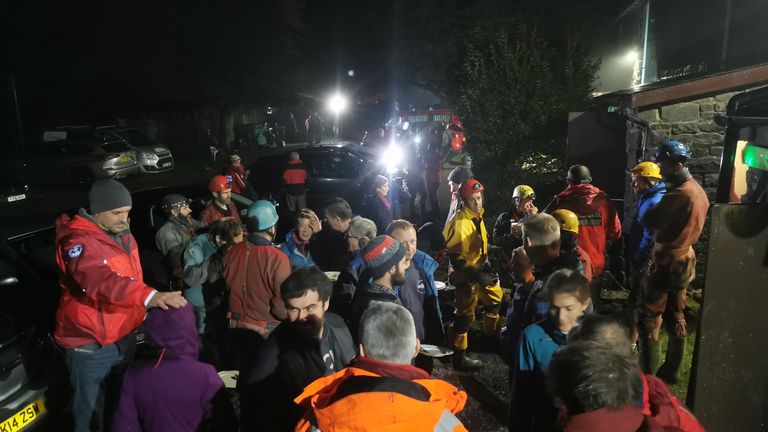 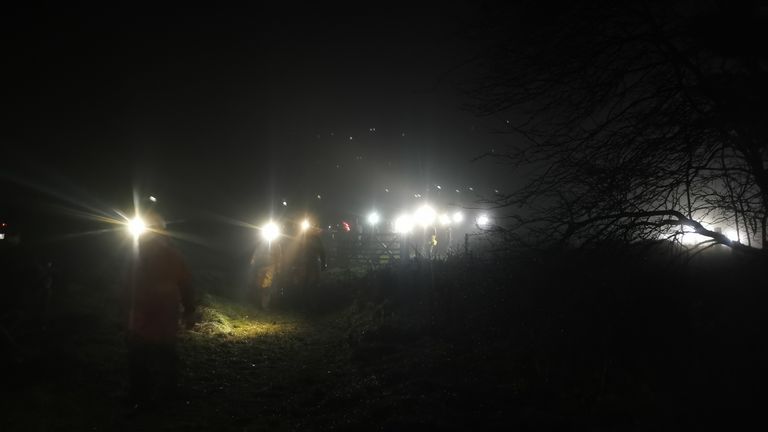 Discussing the man’s condition, he said: “He’s in good condition. I was here when the callout started. I was very worried then, would we get him out alive or would he deteriorate?

He added: “He was just incredibly unlucky. Physically, he put his foot in the wrong place at the wrong time.

“He could have done it on a pavement, in which case he would have been in hospital 10 minutes afterwards.

“But he was a mile or two underground in an awkward place. All the odds were against him, but his mental powers properly got him through. He was in an awful lot of pain to begin with, until we could get the drugs to him. He stood by all that.

The cave system is a Site of Special Scientific Interest (SSSI) and owned by Natural Resources Wales, which is part of the Welsh government. There are five entrances to OFD, which are all gated and only accessible with keys given out by the South Wales Caving Club (SWCC).

SWCC only give out keys to permit holders, who have to be members of caving clubs that are affiliated to the British Caving Association (BCA) or equivalent national body. Groups of cavers granted access to OFD are limited to groups of no more than six and must have “adequate experience and suitable clothing”.

SWCC stresses that cavers “enter at their own risk” and “many sections of the cave are arduous”. It also does not monitor the caves, so groups “must make their own arrangements for rescue”.

Between 2,000 and 2,500 trips are made to OFD by cavers every year, mostly at weekends, according to SWCC. The caver who was stuck due to his injuries entered the site through the Cwm Dwr entrance and was brought out by a team of at least 242 rescuers at the top entrance, Sky News correspondent Becky Johnson reported from the scene.

The man is thought to have gone into the cave system in a group, with others managing to get out and call for help.

The severity of his injuries are unclear, but he was placed on a stretcher and rescuers used a device that put hot air into his lungs, as they fought to keep him warm so he did not catch hypothermia.

Watch: Here is why you shouldn’t be complacent about monkeypox

Colin Pitchfork: Child killer recalled to prison after he…