Daniele, right, during his return trip to the Poland-Ukraine border. A Ukrainian refugee, 84, sits in the back.

Public support for taking in Ukrainian refugees, like in many other parts of Europe, is strong in Italy, with one recent poll suggesting more than four-in-five people were in favour.

Online the sentiment is the same. One Facebook group for Ukrainians in Italy has seen a surge in offers for accommodation and jobs since Russia’s invasion.

The political class in Rome, too, has quickly mobilised in its support for Ukrainians, while donations to a fund for those fleeing are nearing €4 million.

But few Italians have gone to the lengths of Daniele Bellofiore.

The Turin-born 44-year-old has decades of experience in hospitality and humanitarian work. After abandoning a law degree and a job in IT, both of which were far removed from his goals, he decided to connect his passion for nature and helping others by moving to Kenya and Tanzania, where he set up two associations to assist small businesses and craftspeople. He spent 12 years there and then moved back to Italy, opening a B&B in Tuscany, which he runs to this day.

Following Russia’s attack on Ukraine and the subsequent humanitarian crisis, Bellofiore was left feeling profoundly concerned. Yet it was a close Ukrainian family friend – Oleg, a doorman in his mother’s apartment block in Rome – who triggered him into taking action.

“On the first night of the war, I asked him how I could help, and if there was someone I could help,” Bellofiore told Euronews. “A few days later, he told me he knew some people who wanted to escape.”

Bellofiore would later discover that these individuals had managed to escape, but that there was one person who was hoping to rescue their cousin. By then, Oleg’s words had words strengthened Bellofiore’s resolve, and his intentions were set. Without any financial backing other than a few donations from friends, Bellofiore spent the days rousing support and getting a group together to plan a road trip to Poland. 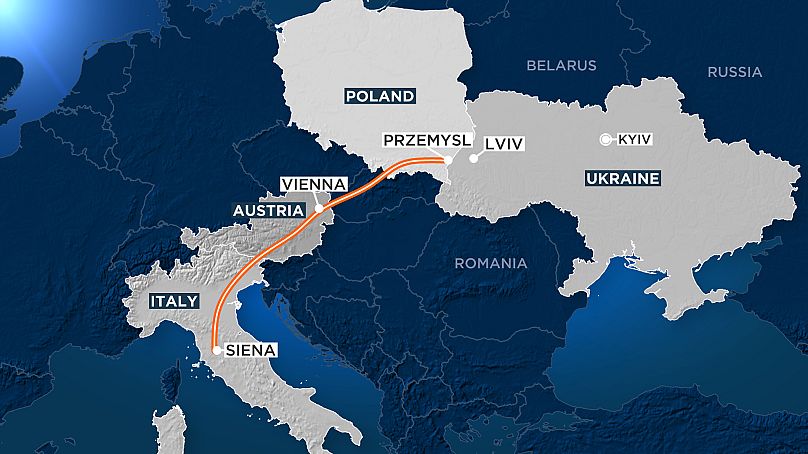 A map showing the 3,200-km round tripCredit: Euronews

‘It was a total emergency, indescribable’

On the morning of 6 March, Bellofiore and his team left the Tuscan town of Siena. The group brought medical supplies, food, clothes, blankets and other necessities and met up with other helpers along the journey up the peninsula. The convoy had eight people in six cars.

After stopping for the night in Vienna, Bellofiore made it to the Polish border city of Przemyśl, fewer than 100 kilometres from Lviv, by Monday afternoon. They left their supplies and went to the makeshift Tesco refugee centre, where Bellofiore witnessed scenes that left him profoundly distressed.

“What I saw there is comparable to what I witnessed in my time in Africa,” he recounted. “It was a total emergency. It was indescribable.”

The following day, the team dispersed to other towns like Medyka, eventually managing to pick up between 10 and 20 people, according to estimates from different team members.

Bellofiore himself accompanied an 84-year-old lady, who was suffering from visual impairment, her younger niece, and her two dogs, to bring them to Italy, finally making it back to Rome on Wednesday. “Terrified and in a state of utter anxiety” at the start of their journey, by the end, Bellofiore recounts how they were teaching him Ukrainian songs and singing together.

Being the first road trip of this kind, the logistical channels alongside the thousands of kilometres were multiple. But Bellofiore’s plans do not end there, as he is promptly expecting to embark upon a second trip on 13 March. This time, he’s planning something bigger – more people, better coordination, and a minivan to help things along.

COP26: Countries commit to shifting away from coal at COP26…

We still know so many people back home, they’re all terrified.

Among others, Stefano Torrelli is also planning to join Bellofiore again on Sunday. The 33-year-old native of Reggio Emilia, in northern Italy, told Euronews he was left “unable to sleep or work” upon hearing the news of Ukraine’s invasion. He found Bellofiore’s initiative on Facebook – which immediately urged him to join in the effort.

“We brought as many as possible who needed to go back to Italy with our cars, all of them having to go to different places,” he stated. “We saw the fear and the uncertainty in people’s eyes, we saw people who must have passed unimaginable horrors. For our next journey, we are planning to have a bigger car, vans, and to help even more people.”

During and following his trip, Bellofiore is documenting everything on social media, sharing videos on his Facebook page (titled “Daniele Unpostonelmondo”, after the name of his B&B). But while the comments and likes – which include messages of gratitude from the relatives of those he’s helped – still remain in the double digits, his initiative is spreading rapidly, to the point that he is now inundated with hundreds of messages and requests.

“We talk about [refugees] as if they’re packages to transport from one place to another,” Bellofiore lamented. “But these are humans, each of whom have their needs. As part of this mission, we try to help these people find their inner peace right from the start of the journey itself.” 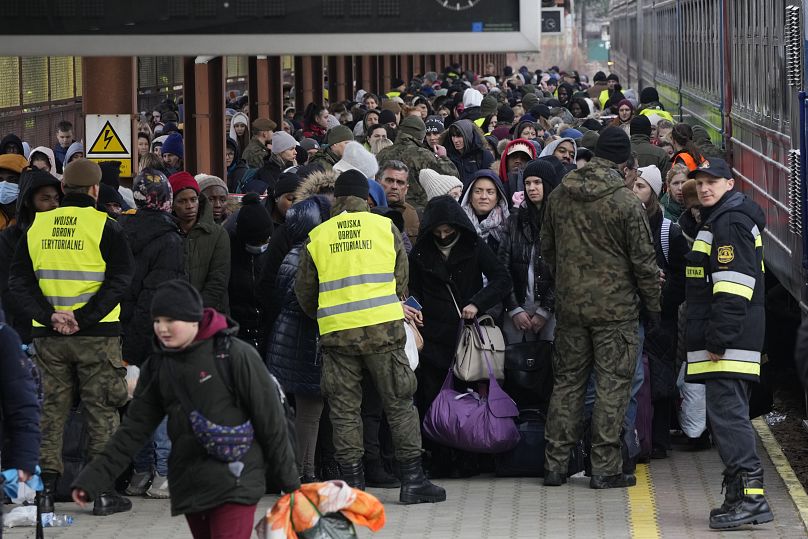 ‘People back home are terrified’

Peering from behind a busy highway in Rebibbia – Rome’s much-maligned prison neighbourhood – a small Ukrainian flag flaps violently in the gelid northerly winds that have been freezing the Italian capital for the past few weeks.

Besides the pole, an enclosed alleyway leading to a small bungalow reveals a bilingual poster advertising a Ukrainian restaurant and then a sign: Associazione Cristiana Culturale Italo Ucraina (Italo-Ukrainian Christian Cultural Association).

While nondescript in its appearance, the gate conceals one of the main organisations at the forefront of a Herculean effort to assist Ukrainian refugees fleeing to Italy.

From well before the Russian invasion of Ukraine, the centre – founded by a former Italian Marine, Mario Tronca – has been assisting and hosting Ukrainians wanting to come to Italy.

Yet arrivals have dramatically multiplied since Russia sent its troops in.

As the sun starts to set, another coach loaded with passengers makes its way into the centre’s sprawling car park. Volunteers hurry to greet the recent arrivals, who are worn out by the sheer length of their journey. As one of the assistants, Igor, revealed, many of them have been waiting for over twelve hours due to queues at the Austrian border.

Small pastries and toys are swiftly distributed. Wrapped in puffer coats and gloves, one mother, accompanying her ten-year-old daughter, recalled their traumatic experience after leaving their home in Kyiv.

“We left on the second day of the war, stopping in various cities, in the middle of the bombings and rubble, after some friends came with a car to bring us out,” she told Euronews.

“There are friends here in Italy who will be hosting us. We still know so many people back home, they’re all terrified.”

The woman is one of more than 23,000 Ukrainians escaping to Italy, most of whom have fled since the invasion on 24 February.

Cars continue pulling up, conversations switch seamlessly between Italian and Ukrainian, and people come to provide aid. One helper, carrying boxes, reveals in passing that her family is still stuck in Ukraine and that all she can do right now is help those who are have made it out.

As nightfall descends, the recently arrived individuals rapidly disperse, leaving the car park as empty and silent as it was half an hour before.

Singapore keeps top spot in Asia for protection of…