An escapee from the vicinity of the Zaporizhzhia nuclear power plant entertains his daughter below a sign that says "Epicentre", August 2022

He has just escaped with his family from the Russian-occupied town of Enerhodar, home to Zaporizhzhia, Europe’s largest nuclear power plant, where he is an employee.

For two days, Serhiy has been in a convoy of thousands of cars held by Russian troops at the Vasylivka checkpoint, just 56 kilometres away from the Zaporizhzhia evacuation centre, and his skin has a dull red glow from the stabbing sun.

Despite the apparent tiredness, what Serhiy — whose name was changed for safety reasons — has experienced since the fighting intensified makes his lips quiver with rage.

“They don’t give a damn where they shoot,” he exclaims in frustration.

Since the Russians took control of the plant in March, increased fighting in the vicinity has resulted in the station getting shelled and escalating tensions over a possible nuclear meltdown.

Recent shelling left a worker injured and damaged three radiation sensors. Many of the plant’s 10,000 Ukrainian staff have been forced to stop working, while recent footage from inside a turbine hall appears to show Russian military vehicles close to the reactors.

While Russian and Ukrainian forces blame each other for the attacks, last week, Ukrainian military intelligence said Kremlin’s occupation authorities allegedly ordered their nuclear plant staff not to come to work Friday — a statement considered by Ukrainian authorities as proof of preparations for a false flag operation. 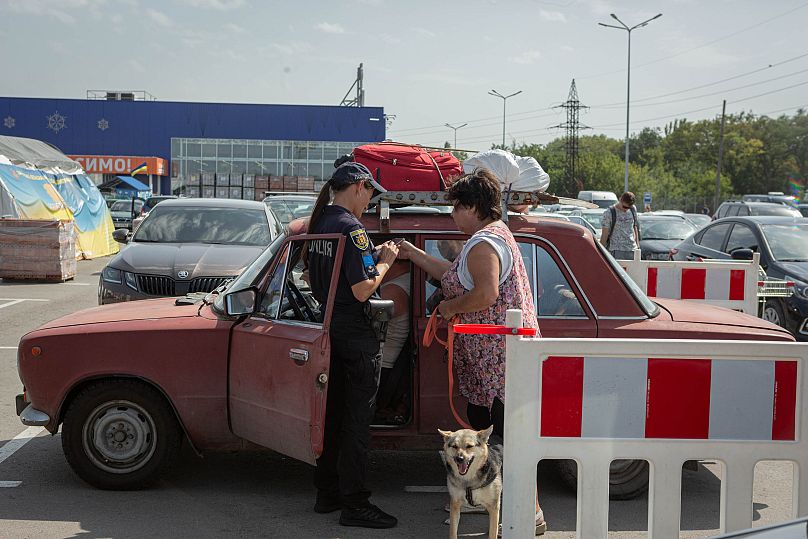 A woman talks to a police officer at the Zaporzhizhia centre, August 2022Manuel Orbegozo

Every day, more than a thousand cars arrive at the evacuation centre set up at the parking lot of the Epicentr mall in Zaporizhzhia.

Many refugees from Kherson, Berdyansk, Tokmak and other southern cities seized by the Russians in the early days of the war make their first stop on Ukrainian-controlled territory here, and the scene of hugs and tears over reunion with relatives even after six months of being separated by war are seen hourly. 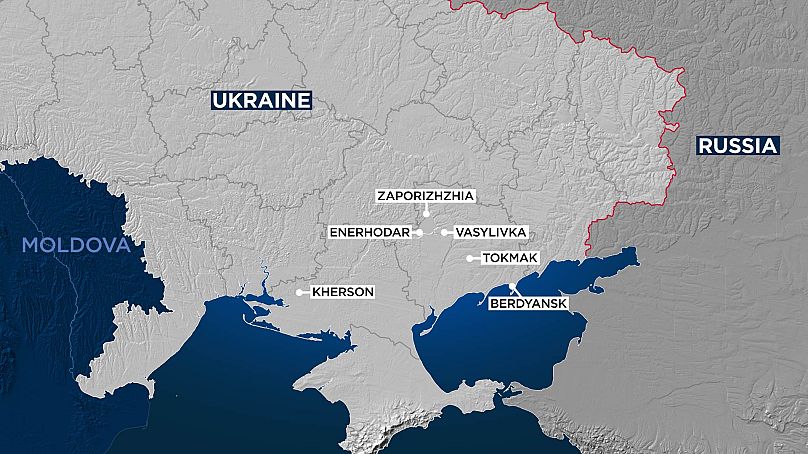 Here, each evacuee is screened and registered by the authorities before receiving social care and leaving for their temporary destination.

However, few cars arrive from Enerhodar, a town of about 50,000 people. Those who have managed to leave after being detained at the Vasylivka checkpoint for up to a week describe the situation as an intense mix of chaos and fear.

“A woman even died there last night,” Serhiy told Euronews. “People called an ambulance, but they (Russian troops) wouldn’t care.”

He estimates that 2,300 cars are still in line waiting to cross into Ukrainian territory.

CDC warns of parechovirus in multiple states after infant…

FIFA and Qatar criticised over LGBTQ rights and worker…

“People are fucking waiting there, crying for our people to come and beat them the fuck out,” he says, furious.

Last month, Energoatom’s president, Petro Kotin, denounced the abduction of about 100 workers at the plant since Russians took control, saying some of those who have been released are forced into claiming to support the Russian occupation.

“The Russians force the heads of the nuclear power plants to take Russian citizenship,” says Serhiy, showing his work ID.

“It’s the top bosses who take citizenship. Many also go on vacation and try to leave.” While on vacation himself, Serhiy was able to leave work and now has no plans to return when his time off is over. 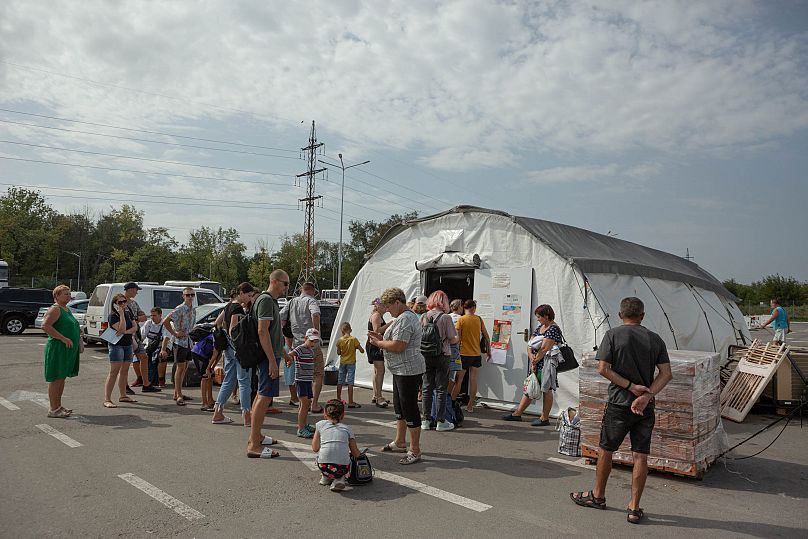 People wait in front of a tent at the Zaporzhizhia centre, August 2022Manuel Orbegozo

Iryna, a 50-year-old economist whose full identity was not disclosed for safety reasons, had to leave behind her life and two apartments in Enerhodar. She was able to get out after waiting in line for six days.

“A man from my work got wounded in his leg at his dacha, (artillery shell) hit the car in the garage, and then a man with a dog was killed on the nearby street,” she says.

“The shelling became very active — on weekends, in the morning, and at night. It was impossible to sleep. And since we have a child going to school in our family, our whole family decided to leave.”

Iryna had to rent a house in a village near the car line while waiting for Russian troops to let her and her family through under unclear criteria. She was in the 40th vehicle to cross out of 150 that day.

“They let people out as they feel. If they want, they can let you out, if they don’t want to, they will not,” Serhiy confirms. 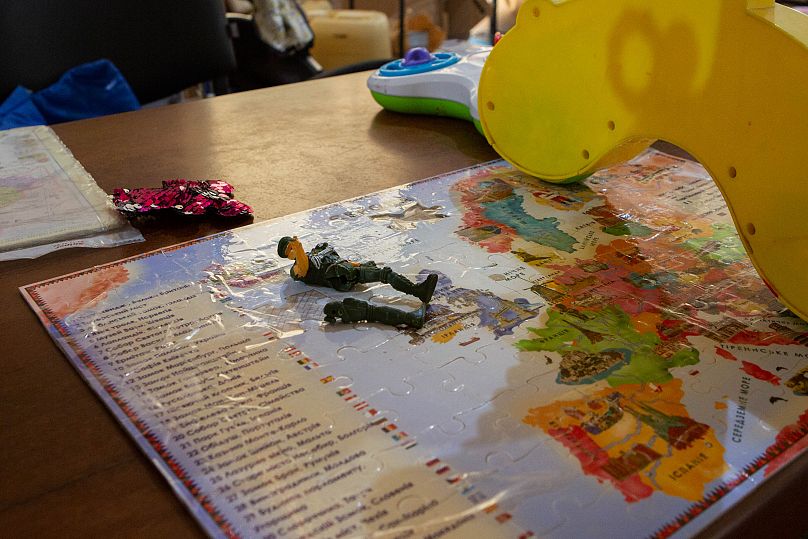 A toy soldier missing a leg at the Zaporzhizhia centre, August 2022Manuel Orbegozo

Iryna, who has decided to stay in Ukraine, believes that perhaps Russian troops are unaware of the danger of fighting near the nuclear plant.

“They are playing a very dangerous game near the station,” she says.

“Maybe they don’t understand, but it has to be explained to them that this is not a joke. It’s very dangerous for many, many people, even for their country. It’s bad that they are not afraid of a nuclear explosion or contamination.”

The journey out of Enerhodar is high-risk, each trip costing as much as 8,000 hryvnias (some €200) per person, another woman who asked to remain anonymous for safety reasons told Euronews.

She travelled with her two daughters, sister and two nieces but now fears for the safety of her husband, a worker at the power plant responsible for liquidation in case of a nuclear explosion, who had to stay in Enerhodar.

“It’s very difficult, he’s going to work and the bombs are exploding,” she says. “If an accident happens, it would be a huge sin.”

These moms on TikTok are raising awareness around child…