Meghan, the Duchess of Sussex, has revealed how she and Prince Harry are “happy” living in California, during a television interview with Ellen DeGeneres.

The duchess, 40, sat down with the US chat show host eight months after she and the Duke of Sussex gave a bombshell interview to Oprah Winfrey, leaving the Royal Family in turmoil.

The couple, who relocated to the US after announcing they were stepping back as senior royals, have until now been incredibly private about their children, Archie and Lilibet. They are yet to share a photo of their daughter, now five months, who was named with a nod to the Queen’s nickname.

Here’s what we know so far: 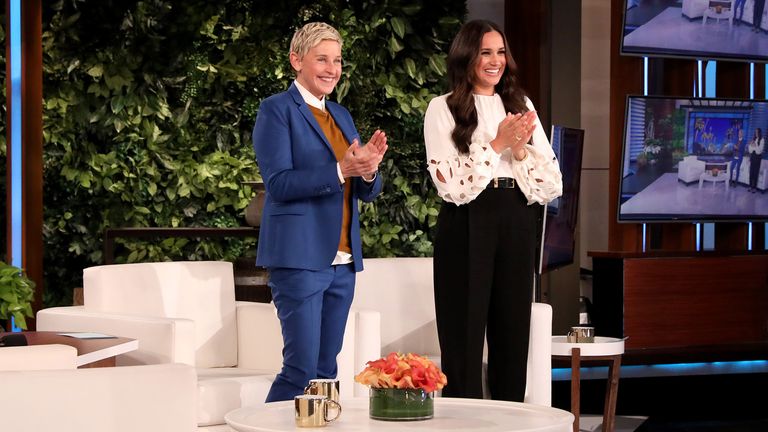 Up for a laugh

Meghan joined in with a prank after DeGeneres told her to carry out embarrassing tasks in front of unsuspecting market stall vendors.

The Duchess used a hidden ear piece to take instructions from the chat host while she nibbled a tortilla crisp like a chipmunk and sung made-up song “I’m a kitten, meow, meow, meow” while wearing leopard-print cat ears.

She also joked about having “healing powers” while holding a crystal against her head and chanting.

The Duchess later sang “feeling hot, hot hot,” after trying the spicy condiment – then drank milk from a child’s beaker in an apparent bid to cool down, to raucous laughter from the audience.

Meghan later said the audience, which clapped and cheered, were “great sports”.

One final night on the town 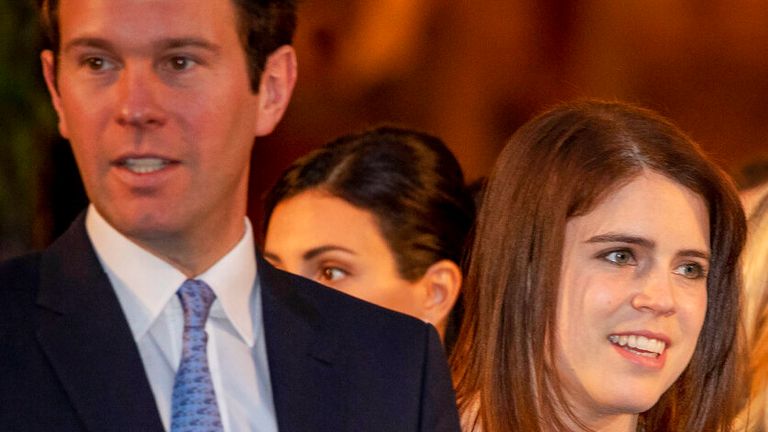 Meghan also confided how she and the Duke attended a post-apocalypse themed Halloween party disguised in costumes when they were dating to enjoy “one final night on the town” before their romance was revealed.

They were joined by Harry’s cousin, Princess Eugenie and now-husband, Jack Brooksbank, who were visiting them in Toronto, Canada.

“The four of us snuck out in Halloween costumes to just have one fun night on the town before it was out in the world that we were a couple,” Meghan recalled.

“It was a post-apocalypse theme. So we had all this very bizarre costuming on and we were able to just sort of have one final fun night out.”

News of their relationship hit the headlines at the end of October 2016.

The Duchess laid bare the realities of having two children compared with one.

She told how Archie “loves being a big brother” to Lili. Meghan said: “Someone told H (Harry) and I that when you have one kid it’s a hobby, and two children is parenting.

The Duchess also talked about how Lili was teething, adding “anything to relieve that” before the host joked she could use tequila. 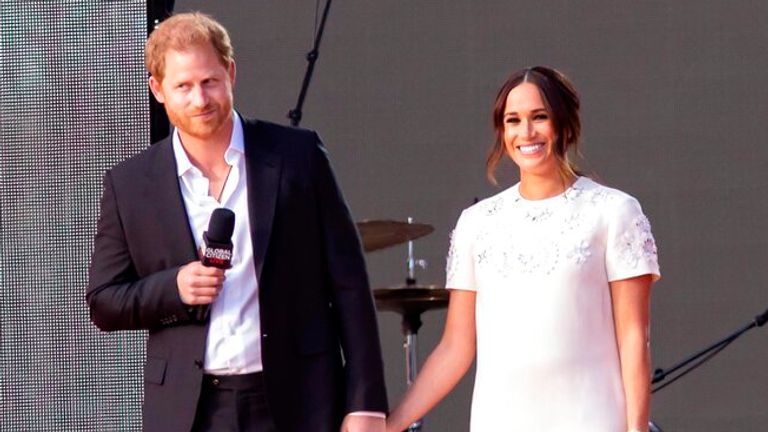 She also revealed how Archie loves to dance – as DeGeneres remarked on how the Duchess is a “great dancer”.

Meghan replied: “I love to dance, Archie loves to dance now too.”

And she told of her passion for cooking, adding that she will be preparing a feast to mark Thanksgiving.

“I love to cook, we’ll be (at) home and just relax and sort of settle in.

“It’s our second Thanksgiving home at California, so it will be nice.” 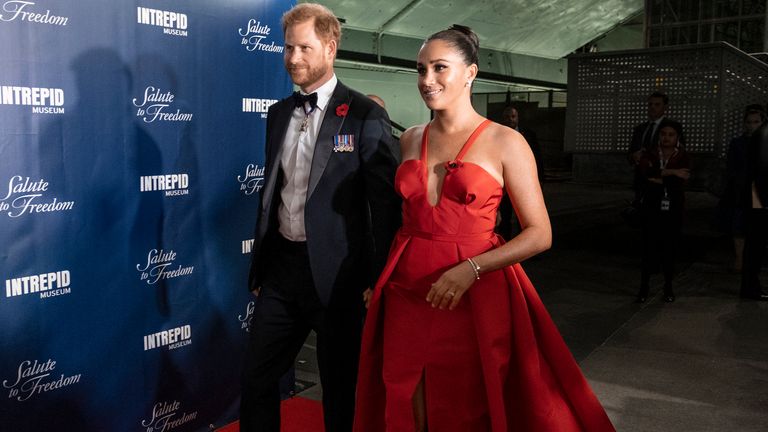 The former Suits actress revealed how Archie, two, wore a dinosaur costume to celebrate Halloween while his younger sister dressed as a “little skunk, like Flower from Bambi”.

But the children were “not into” the festivities, Meghan said – with Archie staying in his costume for less than five minutes.

The family joined DeGeneres and her wife, Portia de Rossi, neighbours in the celebrity enclave of Montecito, to mark the spooky season.

Meghan told Ellen: “We were home and we saw you guys, which was great.

“But no, we wanted to do something fun for the kids and then the kids were just not into it at all.

DeGeneres told how Harry convinced Archie to put his dinosaur costume on, saying: “Finally Harry talked him into putting the head on. But Lili was a skunk… it was so cute.”

The Duchess replied: “She was a little skunk. Like Flower from Bambi.” 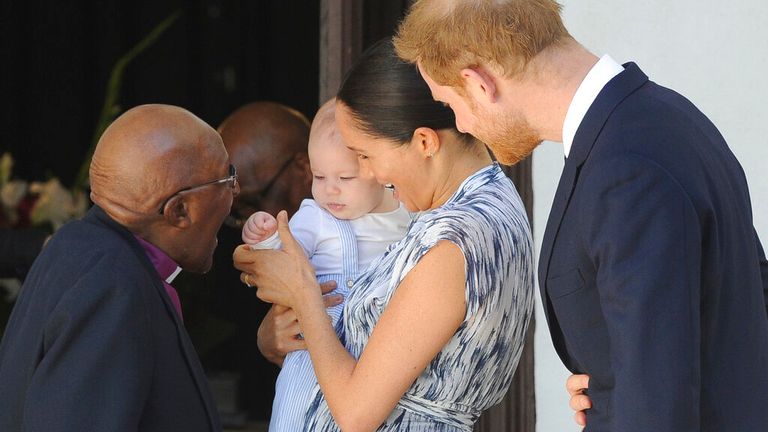 DeGeneres met Meghan by chance at an animal shelter some years ago – and encouraged the Duchess to adopt her first dog, Bogart.

The chat show host previously described the Sussexes as “the cutest couple, so down to earth” and defended them when they faced criticism after taking a run of flights on private jets.

The family have a black Labrador, Pula, and a beagle named Guy.

The pets are featured in Meghan’s children’s book, The Bench, which she said she wrote as a poem for her husband on Father’s Day.

“It was about my observation of him and him being a dad, which was the most beautiful thing to watch,” she said.

DeGeneres asked: “Does Archie know he’s in here? Does he know that’s him and what does he think of the book?”

Meghan replied: “He does. On that first page that you open and you see our dogs, he goes, ‘That’s Pula. That’s Guy’.”

The interview was broadcast just over a week after Meghan apologised for misleading the Court of Appeal over her recollection of the information aides provided authors of an unauthorised biography, Finding Freedom, about her and Prince Harry.

The Duchess sued Associated Newspapers Limited, the publisher of the Mail On Sunday, over five articles that reproduced parts of a “personal and private” letter sent to her father, Thomas Markle, in August 2018.

The publisher appealed, with the hearing told how Meghan chose to address Thomas Markle as “daddy” because it “would pull at the heart strings” if the letter was leaked.