The World Health Organization (WHO) said Thursday that its new estimates show the full death toll associated directly or indirectly with the COVID-19 pandemic between Jan. 1, 2020, and Dec. 2021 was approximately 14.9 million.

Scientists said there were between 13.3 million and 16.6 million deaths either caused directly by the coronavirus or attributed to the pandemic’s impact on health systems during that time.

WHO, UNICEF WARN ABOUT ‘PERFECT STORM’ FOR MEASLES IN CHILDREN

That number is more than double Johns Hopkins University’s official death toll of more than 6 million, with the majority of excess mortality – calculated as the difference between the number of deaths that have occurred and the number that would be expected in the absence of the pandemic based on previous data – in Southeast Asia, Europe and the Americas.

Disputing the WHO’s methodology, India’s Health and Family Welfare Ministry labeled the analysis as “questionable,” complaining that the estimates were released “without adequately addressing India’s concerns.”

The estimates for the two-year period confirm that the global death toll was higher for men than for women and higher among older adults.

The estimates are the result of a global collaboration supported by the work of the Technical Advisory Group for COVID-19 Mortality Assessment and country consultations.

While many countries still lack the capacity for reliable mortality surveillance, using publicly available methodology the WHO says countries can use their own data to generate or update their estimates. 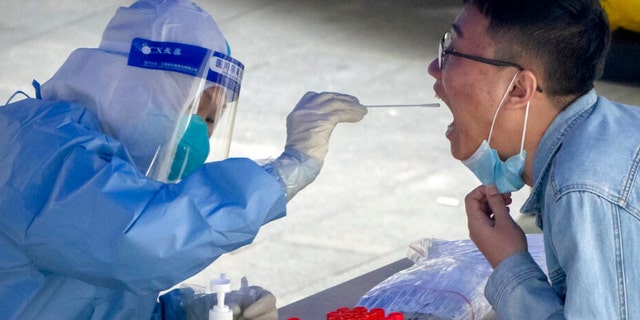 A worker in a protective suit swabs a man’s throat for a COVID-19 test at a testing site in an office complex in Beijing, Friday, April 29, 2022.
(AP Photo/Mark Schiefelbein)

“These sobering data not only point to the impact of the pandemic but also to the need for all countries to invest in more resilient health systems that can sustain essential health services during crises, including stronger health information systems,” WHO director-general Dr. Tedros Adhanom Ghebreyesus, said in a statement. “WHO is committed to working with all countries to strengthen their health information systems to generate better data for better decisions and better outcomes.”

The WHO said it wasn’t yet able to distinguish between direct deaths from COVID-19 and others caused by the pandemic nothing that a future project examining death certificates would probe this.

Terror arrests: Pair held in Dover on suspicion of offences…