Fox Across America host Jimmy Failla joins "America’s Newsroom" to share his thoughts on Netflix’s blunt message to its woke employees who are offended by some of their content.

Traveling with small children can be challenging for any parent, and ever-changing airport security policies can make it even more difficult.

Emily Calandrelli, host of 2020 “Emily’s Wonder Lab” on Netflix, wants clearer breastfeeding policies from the Transportation Security Administration (TSA) so nursing mothers can travel with breastfeeding equipment without being delayed by security, according to multiple reports.

“Here’s what happened. Yesterday was my 1st trip away from my 10 [week] old son, who I’m currently breastfeeding. I’m going through security at LAX. I brought my pump and 2 ice packs – only 1 of which was cold (I won’t need the other until I come home, when I’ll have more milk),” the 34-year-old wrote on Twitter on May 10.

“I didn’t currently have any milk but I was planning to get a last second pumping [session] in before my ~5 hour flight.”

It was the first time the West Virginia native was away from her 10-week-old, so she was hoping to pump before leaving for a D.C. flight, according to the Washington Post.

The TSA agent told her she would have to throw the ice packs away or check them with her luggage, according to the Post.

“Two male TSA agents told me I couldn’t bring my ice packs through [because] they weren’t frozen solid. (This is the key part of the story),” the mother wrote on Twitter.

The TSA has a separate gel ice pack rule, which states: “Frozen liquid items are allowed through the checkpoint as long as they are frozen solid when presented for screening. If frozen liquid items are partially melted, slushy, or have any liquid at the bottom of the container, they must meet 3-1-1 liquids requirements.”

But TSA has an exception for gel ice packs, stating: “Note that medically necessary gel ice packs in reasonable quantities are allowed regardless of their physical state of matter (e.g., melted or slushy). Please notify the TSA officer at the checkpoint for inspection.”

Calandrelli ultimately decided to check her ice packs with her luggage and pump when she landed at Dulles International Airport, per the Post.

“As I was leaving, the manager said, ‘And don’t try to sneak it through a second time because this will just happen again,’” Calandrelli told the Post. “It was just not a fun way to be treated.” 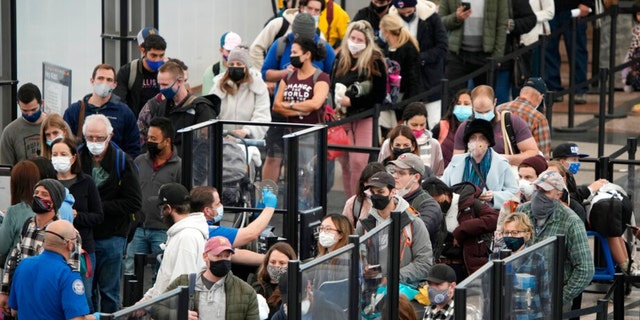 Passengers queue up to pass through the north security checkpoint Monday, Jan. 3, 2022, in the main terminal of Denver International Airport in Denver.
(AP Photo/David Zalubowski) )

Meet the Europeans teaching Ukrainians how to use lethal…

“We will continue to engage with advocacy and community-based organizations to enhance our screening protocols. Additionally, we will re-double our training to ensure our screening procedures are being consistently applied.”

The incident also galvanized Rep. Lucille Roybal-Allard (D-Calif.) into action on Twitter, who wrote: “I will be speaking personally with the TSA Administrator about what happened to you and how we can help ensure it does not happen in the future to you or other women. Again, I am so sorry.”

Typically, if a nursing mother is going to be away from her baby, the body needs be reminded to keep making milk, so they should try to pump as often as their baby is drinking breast milk, according to the Centers for Disease Control and Prevention (CDC). 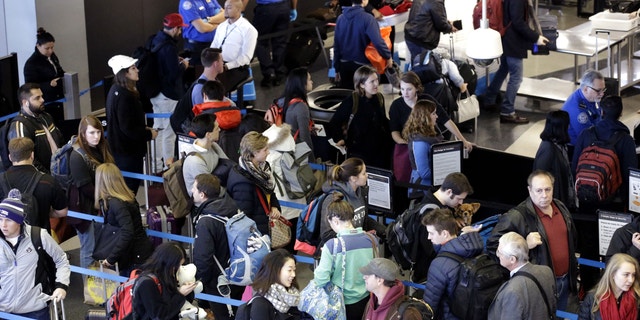 Travelers line up at a security checkpoint at O’Hare International Airport.
(AP)

This usually means a mother traveling without their baby will need to pump at least once during travel transmit time, considering time to and from the airport, the time required for security clearance and actual time while in the air, said Jennifer Horne, a lactation consultant with the Lactation Network, who connect mothers with lactation support.

Mothers who are not able to pump during travel could start to feel breast discomfort and their breasts can become engorged leading to blocked milk ducts, which could eventually result in an infection called mastitis, she added.

“Our bodies are made to express the milk regularly,” Horne said. “There are definitely some problems they can run into if they’re not doing that.”

If pumping is not an option when a nursing mother is away from her baby, the CDC suggests “hand expression.”

“To hand express, you use your hand to massage and compress your breast to remove milk. While it takes practice, skill, and coordination, it gets easier over time,” the agency said. 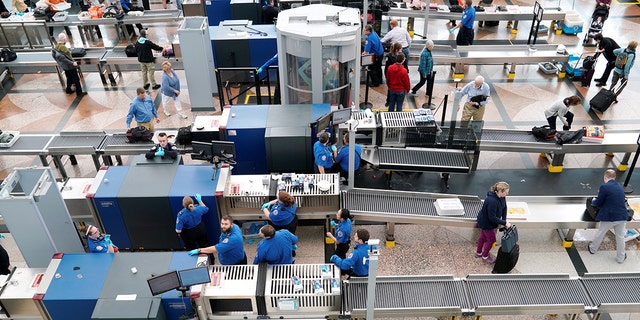 Horne also recommends for nursing mothers who are traveling to bring a bag of frozen peas instead of ice packs because they aren’t liquid.

The bipartisan bill known as the Friendly Airports for Mothers (FAM) Act passed in 2018 requiring all large and medium-sized airports to provide accessible private and clean rooms in every terminal for nursing mothers as well as baby changing tables in both men’s and women’s bathrooms.

And back in 2016, the Bottles and Breastfeeding Equipment Screening Act (BABES Act) signed into law, where TSA Agents must undergo specific training regarding breast milk, formula and infant feeding equipment policies, according to a press release.

But Calandrelli said the current policies are not enough to protect nursing mothers who travel, requesting the TSA to “classify and clearly state on their website that breast milk, formula, and related breast pumping equipment is considered ‘medically necessary.’”

“I want President Biden to direct Secretary Alejandro Mayorkas and the Department of Homeland Security to stop TSA from discriminating against moms who travel.”

Does a daily aspirin help over 60s avoid heart disease and stroke?…

COP26: President Bolsonaro’s no-show is no…