A British F35 stealth jet has crashed shortly after takeoff from the UK’s flagship aircraft carrier, forcing the pilot to eject into the Mediterranean.

It is the first time HMS Queen Elizabeth, on a maiden voyage, has lost one of its £100 million warplanes.

Hostile action is not thought to have been involved in bringing down the F35 jet – one of the UK’s most expensive, classified and valued weapons programmes.

Efforts are underway to retrieve it.

An investigation will likely focus on potential technical or human error.

The crash could raise concerns about the safety of all other F35B jets – used by a number of different nations, including the United States.

For now, all UK flying operations are continuing as usual.

A Ministry of Defence spokesperson said: “A British F35 pilot from HMS Queen Elizabeth ejected during routine flying operations in the Mediterranean this morning.

“The pilot has been safely returned to the ship and an investigation has begun, so it would be inappropriate to comment further at this time.”

It is loaded with top-secret radars, sensors and other technology so recovering the wreckage will be a priority. 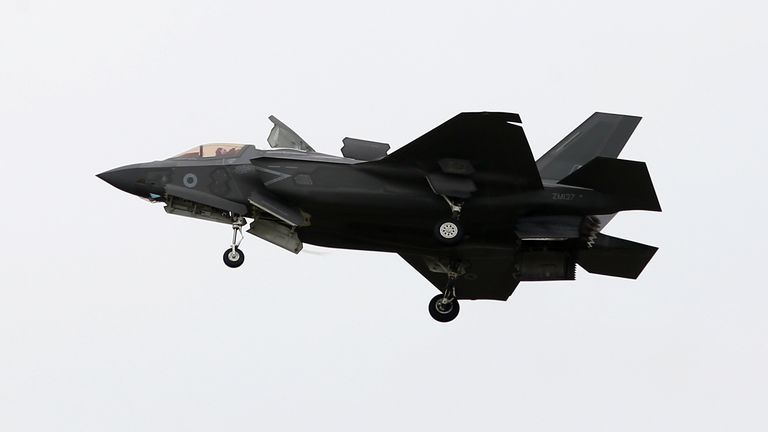 Eight British F35 jets are on the carrier, along with 10 American F35s. They are the B variant of the Lockheed Martin jet, which can take off at a short distance and land on the carrier.

As well as being the first crash for the aircraft carrier, it is also the first time any of the UK’s fleet of 24 F35 jets have crashed.

While very rare, a small number of American F35 jets have come down including one in May 2020 during a routine exercise in Florida.

The F35 jets are the most prized part of the UK’s new the carrier strike group. The British and American jets have flown to intercept Russian aircraft from HMS Queen Elizabeth in recent months.

The aircraft carrier is returning to the UK after more than seven months at sea on a maiden voyage to the Far East and back.

The jets on board have conducted around 2,000 take-offs and landings during that time.

Sky News visited the carrier earlier this month to witness the jets in action.

Wednesday’s incident occurred at approximately 10am UK time in international waters. No other vessels or aircraft were involved.

A comprehensive military air investigation will be conducted urgently.

Inflation hits highest level in a decade at 4.2% as fuel and energy bills soar