Daniels, 17, was supported by his teammates, sponsors, club management and owners in a move that might be a watershed in Europe.

Despite liberal social attitudes towards LGBT+ issues in many countries on the continent, there is still only a tiny number of professional male athletes in team sports who feel they can be fully open about their sexual identity.

A handful of high-profile examples recently in football, rugby and ice hockey around Europe give some hope that attitudes are changing.

“I think it’s great that a young person has come out. I have friends in their 20s and they are completely different from my experience of being that age,” explains Jim Dolan, founder of Pride of Irons, the official LGBT+ supporters’ group at the Premier League’s West Ham United.

“They just know themselves. They know who they are, they know their place in the world.”

“Part of it is, if you are a gay footballer, what are you going to do in terms of research to prepare for possibly coming out? You’re going to become familiar with Justin Fashanu’s story even if you weren’t aware of it before, and that kind of thing is going to have an effect I’m sure,” Dolan told Euronews. 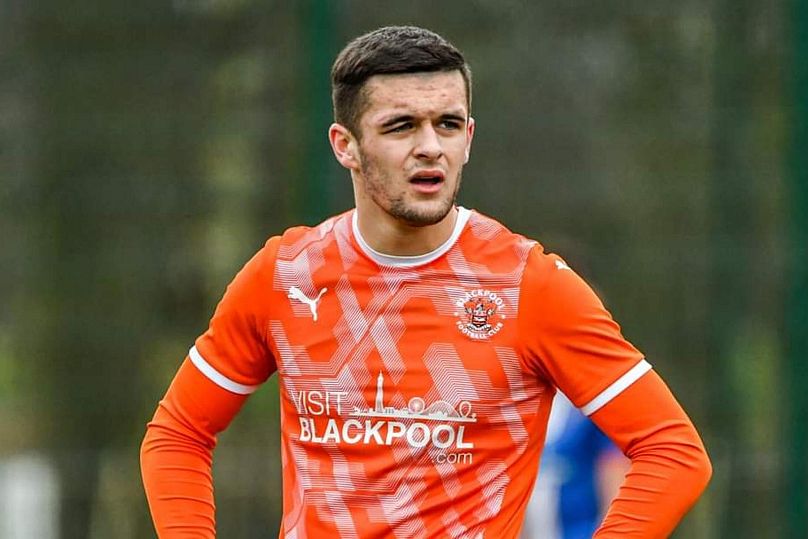 Justin Fashanu was the last — and only — high-profile English footballer to come out towards the end of his playing career in 1990.

A series of salacious stories he sold to the tabloids about his own sex life saw him fall out of favour with fans and managers. He was branded an outcast by his brother and ended up playing for lower league sides in England and Scotland before moving abroad to play and coach.

An allegation of sex with an underage boy in America saw Fashanu flee back to England where he committed suicide in 1998, believing he would not get a fair trial in the US because of his sexuality.

Jim Dolan says that any players now thinking about coming out will be able to look at the positive experience of Jake Daniels as an indicator of how to handle their own coming out journey.

“He’s definitely opened the door, because what a lot of the players didn’t have is a view of what happens next. And I think a lot of those ‘what ifs’ are now going to be answered for them,” he said.

“There’s a safety in numbers thing. If you’re the first one it’s going to be more difficult than if you’re the second or third or fourth.

“You hope that Jake Daniels is going to be able to inspire people who want to come out and see it’s potentially easier than they perhaps thought.” 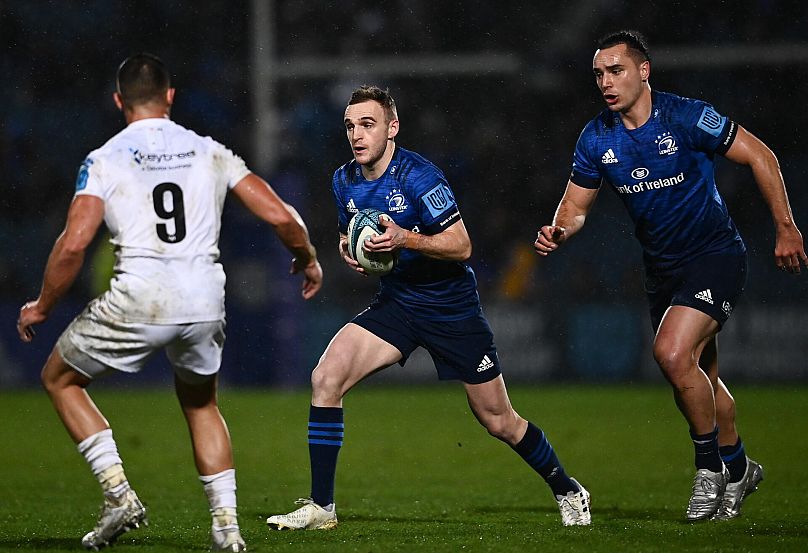 There are encouraging signs in the world of rugby union as well that coming out does not mean the end of a career, or being shunned by fans and teammates.

This week, scrum-half Nick McCarthy, who plays professionally for Leinster in Ireland, came out as gay having told his teammates and coaches earlier in the year.

He describes the whole experience as a weight off his shoulders.

“I’m really happy that I did it,” McCarthy said in an interview on his club’s website.

“I struggled with coming out for a while and it was starting to impact on me and my happiness so it was the right decision,” he said, adding that he considered quitting the game completely as he was not sure it was possible to come out as a professional sportsman.

“It’s not common for a male athlete to come out in sport, never mind professional rugby, and it’s probably something that I didn’t want to believe or accept myself either,” he said, describing the experience since coming out as “entirely positive”.

McCarthy was not alone at Leinster either. His teammate Jack Dunne had come out as bisexual while he was still in school and by the time he turned professional, his sexuality was old news.

Dunne will move to Exeter Chiefs for the upcoming season, making him the first out player in the English Premiership. 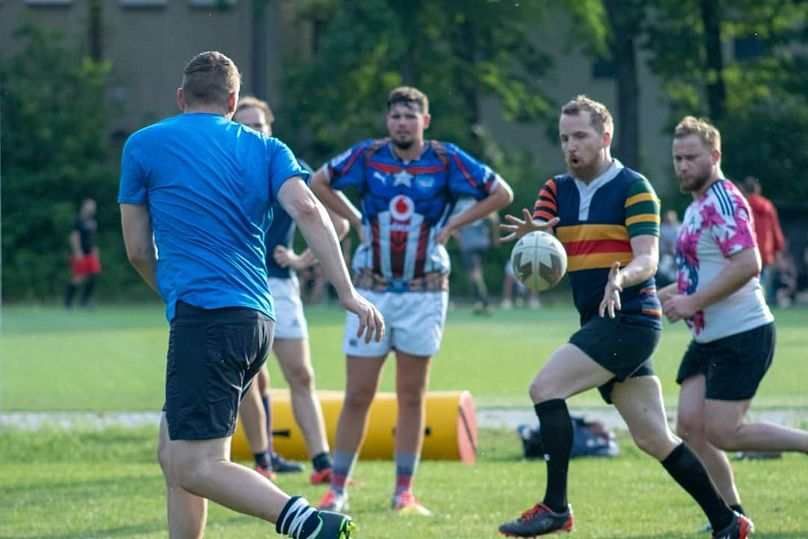 A sign of the changing attitudes to gay men in team sports in Europe is the raft of inclusive rugby clubs that have launched in recent decades to welcome amateur players – like the Stockholm Berserkers, Madrid Titanes and Kings Cross Steelers in London.

Many of these are brand new organisations, but in Scotland, a legacy club founded back in 1893, Dunfermline Rugby, became one of the first in Europe to launch an inclusive team for gay and bisexual men within their existing club organisation.

Germany’s first gay rugby club Berlin Bruisers have been playing for nearly a decade, and started off just staging friendly matches against local teams. It took them two years to approach the regional league to ask to officially join.

“We wanted to join the lowest league available here in the Berlin region and I went to the first meeting to sign us up, with no idea of the attitudes we might encounter,” said Alex Arc, one of the Berlin Bruisers’ club organisers.

“We went with some apprehension, and when I started my speech to explain about the Bruisers I realised there was a bit of bewilderment.”

“They didn’t understand why I was doing all the talking. At one point someone asked ‘do you want to play rugby with us or not?’ And it wasn’t an issue at all” that we were a gay team, he told Euronews.

The team lost many of their early games by large margins, but tenacity — and bloody noses on the pitch — earned the underdogs respect from opponents.

“We didn’t even get comments from individual players. When things started to get more heated it wasn’t anti-LGBT sentiment, it was because we became a more competitive team,” Arc said. 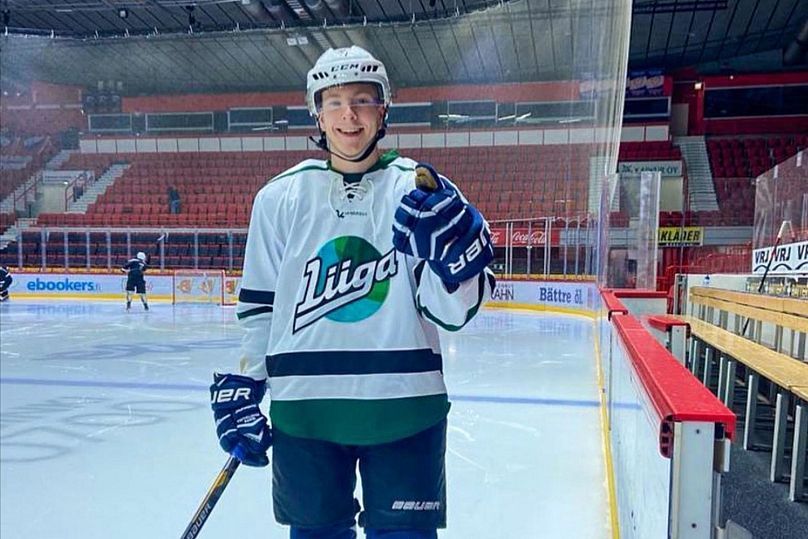 When Finnish ice hockey player Janne Puhakka came out in autumn 2019 he had already retired from the game professionally.

There are almost no examples of elite hockey players coming out in Europe during their careers — Danish goalkeeper Jon Lee-Olsen is one of the rare exceptions.

So in a country where ice hockey stars are put on a pedestal — the Finns are currently World and Olympic champions — it caused a media frenzy when the country’s biggest newspaper picked up an Instagram post Puhakka had written about his relationship status.

“It actually became a lot bigger thing than I expected just because I was thinking I had already been done playing so I didn’t expect all that attention,” Puhakka told Euronews.

The 27-year-old, who was recognised for his advocacy this month at Finland’s Queer of the Year Awards, said that everyone has their own reasons for not coming out during their playing career, but in his case, there were a number of factors involved.

“I was very young and still focused on my career and I didn’t want any barriers to going further in my career,” he said.

“If you come out when you’re still playing there are certain countries where hockey is quite big and it might close some doors. So that was definitely one reason.

“And there’s very few examples of anyone who has done it and how it has affected their careers,” Puhakka adds.

Now he’s hopeful that a different, younger, more open-minded generation of players and coaches will make it easier for professional athletes to come out.

“I believe that the fear of coming out is more in the heads of the individuals. It’s not like if you’re gay you have to come out. It’s about you being able to tell your team mates who you are, and being able to be yourself,” said Puhakka.

“But we’ve reached the point where we need a couple more examples of coming out to show it won’t damage your career.”

Physical therapy may be better than steroid shots for arthritic knees

What mysterious illness resulted in the death of 3 Americans…