Even though he was 2,000 kilometres away in Tel Aviv, Israel, the 21-year-old spent days brainstorming what he could do.

With his girlfriend Chava’s family in Kyiv and in the southwestern Black Sea city of Odesa when the war began, and unable to leave the country after their initial plans fell through, Moerdler — who commonly goes by Bernie or Boaz — decided to help them stay safe.

He designed Ukraine Siren Alerts or UASA, a website and a network of social media bots that immediately notify users about areas in the country that are under threat of Russian bombardment — often faster than the alert systems created by the government.

“My goal at the end of the day was to help as many people as possible, as best as I can,” said Moerdler, who has 15,000 active followers or subscribers across all platforms.

One alert system to aid everyone

The existing system of alerts is heavily reliant on physical sirens, which is an issue for those who either can not hear them or live in an area where they have not been installed, Moerdler explained.

Although other apps exist, most of them are either rudimentary or very local as they had to be created last minute.

Getting alerted on time could make a life or death difference for people who are internally displaced — Ukrainians who left eastern parts of the country and fled to safer cities in the western part of the country — who are unfamiliar with a place, for example.

Being unaware of potential air raids is also an additional danger to foreigners, such as journalists or aid workers, who frequently find themselves travelling from one crisis spot to another.

For people abroad who have family or friends in Ukraine, finding out whether a specific part of the country was experiencing air-raid threats is an important part of staying informed or knowing why someone might be temporarily unreachable in a shelter.

“There’s no real compelling way to alert people of sirens in and outside of Ukraine. It’s a very thrown-together system,” Moerdler told Euronews. 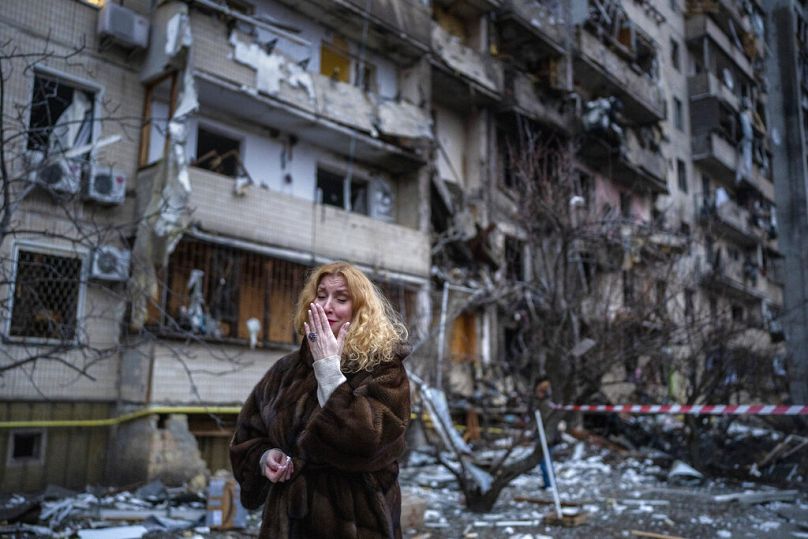 Natali Sevriukova reacts next to her house following a rocket attack the city of Kyiv, Ukraine, 25 February 2022AP Photo/Emilio Morenatti

“If you’re outside of Ukraine, you can’t easily download the app, and you can’t get alerts from more than one or two areas, so it becomes a bit more difficult — for instance, in my girlfriend’s example, she couldn’t see alerts for both Kyiv and Odesa.”

“So I drew inspiration for the system overall from Israel’s Red Alert system, which is incredible, has saved countless lives and allows you to do the things I was looking for, like see multiple areas, or see the information on a map,” Moerdler explained.

Moerdler designed the first version of UASA within days of the 24 February invasion, programming it to listen in on various live feeds and automatically post an alert. It worked for a while, but it was unreliable and very resource-intensive.

By 1 March, the new version of UASA was ready, this time using Ukrainian military information and local alert systems to include the most up-to-date information on which areas were under threat and which ones were safe.

It covers the whole country: any region, city or village. It will pick up an alert if it is out there, Moerdler explains. 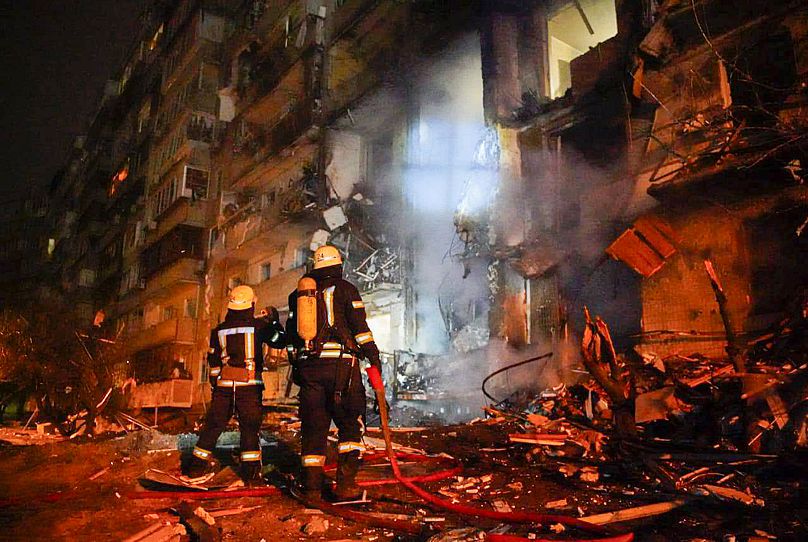 Firefighters inspect the damage at a building following a rocket attack on the city of Kyiv, 26 February 2022AP/Ukrainian Police Department Press Service

“If the army detects an incoming threat: a cruise missile launch, cruise missile detection via radar, or let’s say an aircraft that’s just taken off and it’s flying towards a place in Ukraine, they will automatically notify the authorities in areas that could be affected, and then the emergency services will start posting alerts,” he said.

“What UASA does is, it automatically looks for those alerts from the authorities themselves. Once it sees it, it will grab it, get the information, detect a threat — what type is it, is it an air alert or an all-clear alert — and automatically post that on social media pages and eventually to its application.”

He also went for simplicity, choosing Twitter, Telegram and Facebook. These platforms are easily accessible and most commonly used by people in Ukraine regardless of their digital prowess.

“People of all ages know how to look through social media,” he explained, “and definitely the goal was to make it as easy as possible to use, or maybe even just super-simple, two clicks away from the next feature, that’s that.” 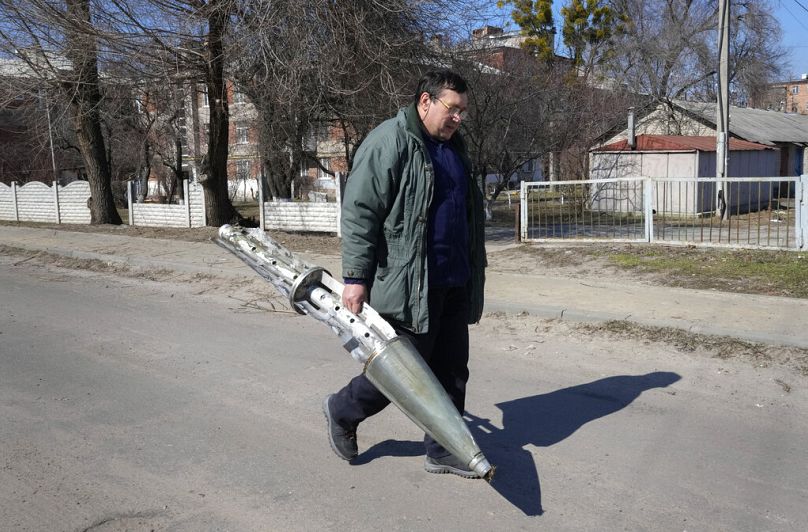 And the best thing is, it works. Since launching his platform, Moerdler has received a number of messages from people in Ukraine, including from those whose lives it saved.

“I heard from someone who’s originally from Kyiv that the village he was in didn’t have physical sirens installed. So he was relying entirely on UASA for alerts,” he recalled.

“He said that there have been countless times it saved his life — he was able to get to shelter in time because of it. Since then he’s moved out since unfortunately his house has been destroyed by the Russians.”

Kyiv fears a civilian massacre at Borodyanka worse than Bucha’I focused on survival’: Mariupol escapee tells her story of one month in besieged city

Moerdler says he is humbled by the response from Ukrainians on a daily basis.

“I am touched. I have to say that it really makes me emotional all the time, to see the messages I get from people, to see how it’s helping people.”

From helping cancer patients to helping civilians amidst war

Despite his young age, this is not the first time Moerdler has used his background in computer science, software development, and artificial intelligence development to work on projects that help others – from teaching pilots how to fly the latest commercial jets to aiding health workers in curing cancer.

It all started with a fascination with computers at the age of five, he recalled.

“My dad got me a computer around that time, and I always had issues with it.”

“I started learning how to program and create software on my own, and ever since, I have worked on many different projects,” he said.

His big passion for aviation and an invitation from a United Airlines pilot to come along for his retraining from a Boeing 747 to the state-of-the-art 787 resulted in Moerdler building a training simulator for the latter — the first of its kind.

“I went down [to the training centre], and they gave me all these things like the paper sheets they use for training.”

“I called up my friend who was also a big aviation fan and I was like, you know, we could actually build a 787 simulator and probably do it a lot cheaper because they told me it was about $5 million.”

“It was like one of those moments where you say to each other ‘oh, sure, why don’t we try it,’ and then it spirals into a bigger thing.”

“Next thing I know, we’re 3D printing and woodworking and doing all of these big things and managed to create a full-scale Boeing 787 flight simulator, the first one in the world,“ Moerdler said. 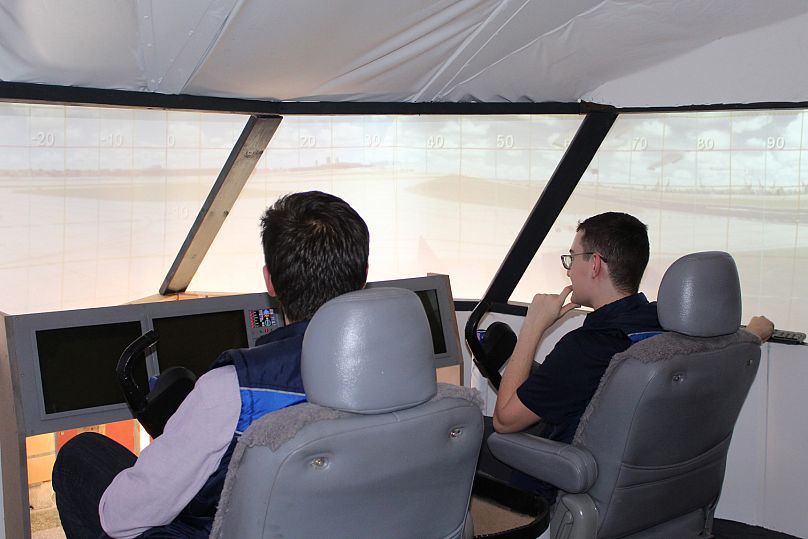 Moerdler and a colleague in the cockpit of the 787 simulator, dubbed ‘Project Dream’.Courtesy of Bernard Moerdler

His next big project came at Bar Ilan, when found himself working on cancer-detecting AI software called Ptolemi.

“I came to Israel for a gap-year programme; I was in a Yeshiva. I was looking to be involved in a project of some sort, and my teachers introduced me to a professor here at Bar-Ilan who told me, ‘We’re creating this device and we need to detect [cancer] cells and we can’t have our students counting these cells individually. Can you help us?” he explained.

“I’ve been playing around with artificial intelligence so I said I’ll try some things out, and I created a whole AI that actually can classify different cancer cell types based on microscope images. It has a database of thousands of types of cancer cells and can classify each one and tell you whether it’s alive or dead,” he pointed out.

The application monitors the efficiency of cancer treatment by tracking how efficiently the cancer cells are being attacked. “If [the cells] are mostly dying you can say that the treatment is doing well, or if most of them are living or expanding you can say maybe that treatment isn’t doing so well.”

For Moerdler, UASA is yet another project that channels his profound belief that technology is instrumental in saving lives.

“It’s a big deal. I feel as if maybe this conflict in Ukraine should be a wake-up call for countries to start adopting systems to notify people in time and save as many civilian lives as possible,” he said.

When the war ends, Moerdler would like to get an opportunity to work more closely with the Ukrainian government to make his alert app better integrated with their system.

“In general, disaster alert systems are incredibly important. Even now, so many people are using the application so why not use it in other respects as well so that people can get the information in one easy location.”

Together with another programmer from Romania who is helping him out – both do this work pro bono – they are hoping to launch an expanded version of the UASA site and application that would come with even more options. 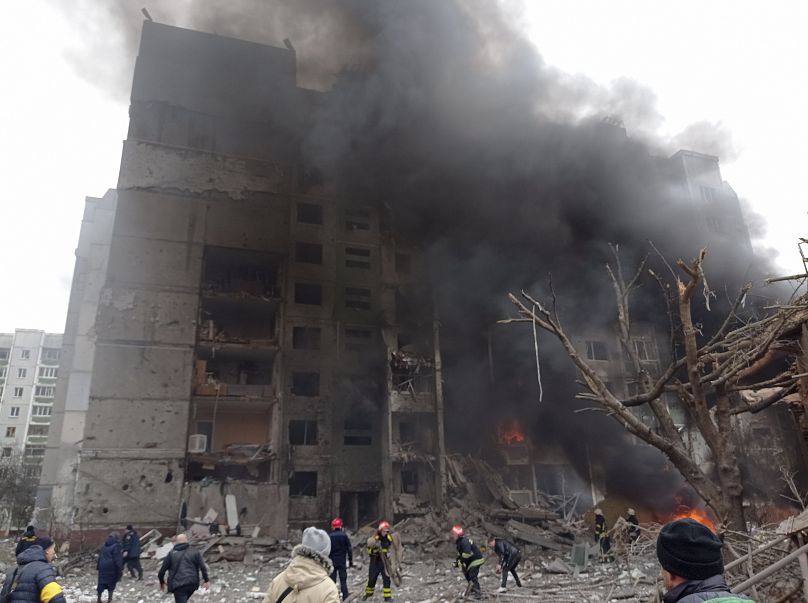 “There are a lot of tools we’re integrating, like a shelter finder, an ability to find wifi near you, so that you can connect to one to save your data or if you don’t have data, to connect to the internet.”

Moerdler wants his platform to be able to help people know the location of everything from minefields to potential Russian army locations in the frontline areas.

His latest design will automatically gather news reports and open-source information provided by Project Owl, an initiative that uses deployable communications networks to collect data in places struck by war or other disasters.

Early warning systems will protect everyone on Earth in 5 years, UN announcesUkraine man whose home was ‘looted’ by soldiers tracks missing Apple AirPods over Russian border

“People will be able to see which towns are being heavily attacked, where are the minefields, where are the Russian checkpoints, things like that,” he said.

“That way, if they’re attempting to get out of the town that they’re in, they can use it as a rough map to be able to get to safety.” 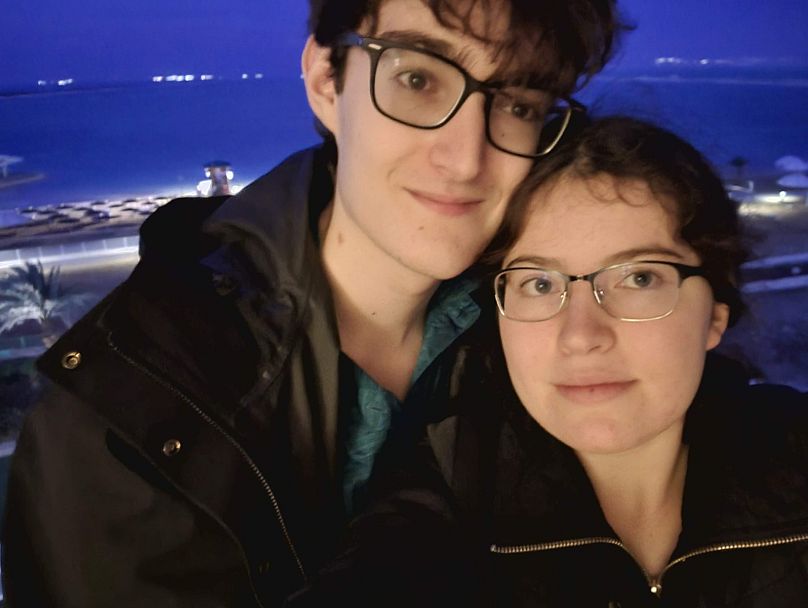 Ultimately, Moerdler’s wish is for the war to end so that he could finally visit Ukraine — the country he has never visited and that he now found himself helping at a distance — especially the places where his girlfriend was born and grew up, such as Crimea.

“People say, ‘Well why would you do it, isn’t it difficult,” and it doesn’t matter that it’s difficult,” he said.

“What I want most is this conflict to be over, and no conflict at all in fact, but since we’re living with this reality, why not try and save as many lives as possible?”

Twelve years of Orban: How the EU has failed to rein in…

Thousands of COVID-19 deaths in U.S. South were preventable,…