Storms in Europe: Girls, 4 and 8, among a dozen killed in Austria, France and Italy

Violent storms in Europe have killed at least a dozen people, including two children, since Wednesday.

The children were killed when strong winds toppled trees at a lake in Lavant Valley, near the southern city of Graz.

A further 13 people were injured, two of them seriously, officials said. Many of the victims were visiting the popular tourist region for their summer holidays.

Austrian President Alexander Van Der Bellen called the children’s deaths “an unfathomable tragedy”, while the mayor of the nearby town of Wolfsberg, Hannes Primus, said the area looked “like a battlefield”.

Meanwhile, three women were killed when lightning struck a tree near the central town of Gaming, causing it to fall over.

Gusts of 220 kph were recorded in France on Thursday, according to the national weather agency.

Five people were killed on the Mediterranean island of Corsica and 45,000 households were without power.

Dozens of people were injured and 12 were hospitalised, one in critical condition, authorities said. Among the dead in Corsica was a 13-year-old girl who died after a tree fell on a campsite in the coastal town of Sagone.

A 72-year-old woman was killed when a beach restaurant roof fell on her vehicle in Coggia, and a 46-year-old man died on a campsite in the town of Calvi.

French President Emmanuel Macron has chaired an interministerial government meeting in response to the crisis. 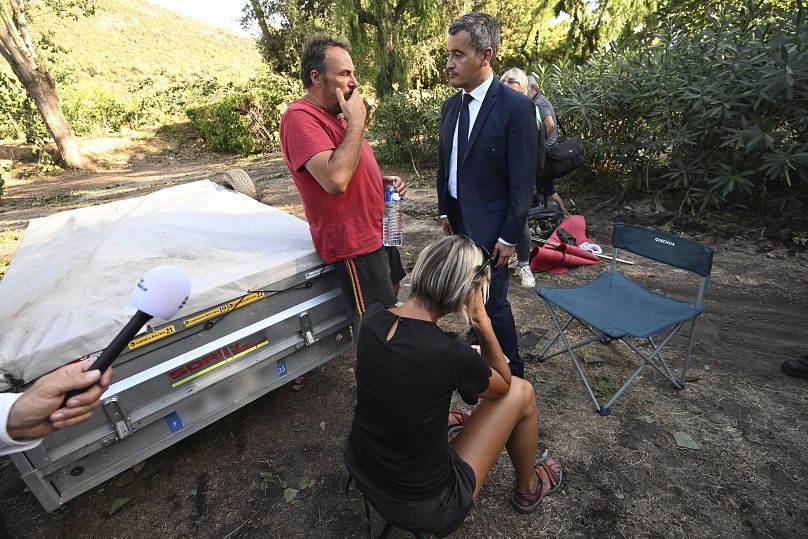 French Interior Minister Gerald Darmanin, right, speaks with holidaymakers at the Sagone camping site in Sagone, Corsica, where a tree fell on a bungalow, killing one personEmmanuel Dunand/AP

At least two people died and 18 others were injured after strong winds hit the Italian region of Tuscany.

More than 100 people were evacuated from their homes to stay in emergency accommodation in schools and gyms, according to the Italian civil protection agency.

A man in Lucca and a woman in Carrara were both killed by falling trees, according to Italian media.

Meanwhile, four people were injured at the seaside campsite of Marina di Massa, and four others were hospitalised in the medieval town of Barga after their vehicle was hit by a damaged roof.

The storm also damaged some fragments of the famous bell tower of St Mark’s Basilica in Venice.

High winds of up to 120 km/h and torrential rain tore down trees and caused flooding across the country on Thursday.

Authorities in Milan have decided to close the city’s parks on Friday. Citizens have been urged to avoid parking or walking under trees and remove any loose items from their balconies.

The Lazio region has also forecast rain and strong winds from Thursday evening and throughout Friday. 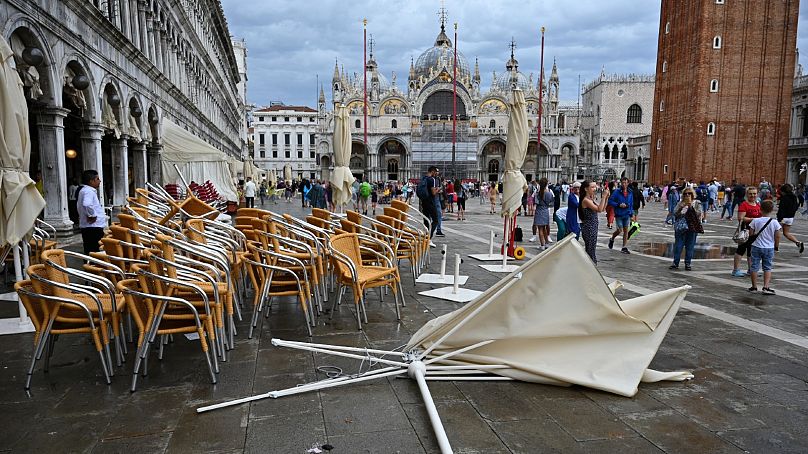 A parasol lies on the ground on the terrace of the Eden bar at Piazza San Marco in Venice on August 18, 2022 as a result of bad weather.Credit: AFP

Authorities in Germany warned of heavy rainfall in the south Friday and put air rescue services on high alert.

The country’s national weather service DWD warned of “extremely abundant, prolonged rain” and the risk of flooding near the Alps.

The Bavarian Red Cross said it was raising the alarm level for its air rescue specialists, putting helicopter crews on heightened alert.

Signs of aging in DNA associated with higher COVID-19 death…