A tsunami advisory has been issued for Hawaii and the North America West Coast after tidal waves hit the Pacific nation of Tonga following a giant underwater volcano eruption. 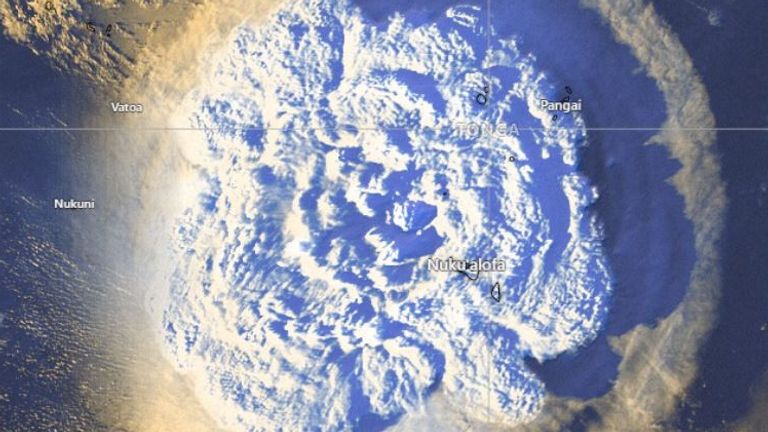 There were no immediate reports of injuries or the extent of the damage as communications with the small nation remained problematic.

The Tonga Meteorological Services said a tsunami warning had been put in force for all of Tonga.

In Hawaii, the Pacific Tsunami Warning Center reported half a metre (a foot) wave slamming ashore in some areas.

“We are relieved that there is no reported damage and only minor flooding throughout the islands,” the centre said.

Speaking to Sky News, Roger Musson, seismologist at the British geological survey, said: “This is a very large eruption.

“There was an eruption of the same volcano about a year or so ago, but this one is seven times larger, which is really rather big,” said Mr Musson.

“Tonga lies in what’s known as the Kermadec subduction zone. It’s a very seismically active area. And where you have subduction – where one crustal plate dips below another one – you also get volcanoes.

“This submarine volcano has been active for a few years now, but this is far and away the largest eruption it’s produced.” The tsunami advisory was also issued for British Columbia in Canada.

Authorities in nearby Fiji also issued a warning, telling people to avoid the shoreline due to strong currents and dangerous waves.

Tsunami waves of 2.7ft (83 cm) were observed by gauges at the Tongan capital of Nuku’alofa and waves of 2ft at Pago Pago, the capital of American Samoa, the Pacific Tsunami Warning Centre said.

It is the latest in a series of spectacular eruptions from the Hunga Tonga Hunga Ha’apai volcano. 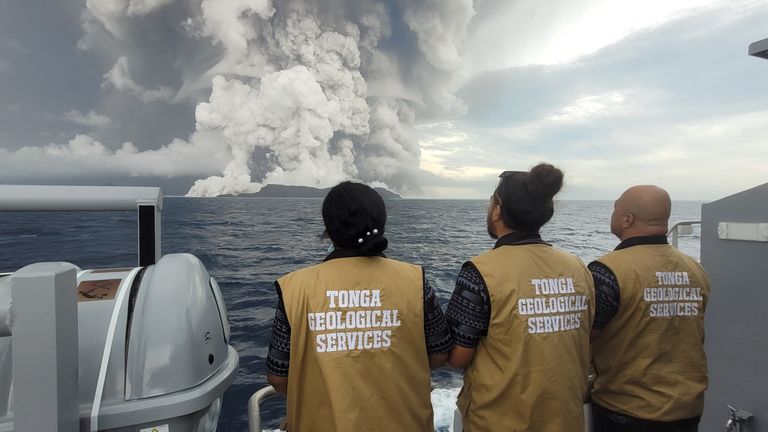 “The tsunami from a volcanic eruption like this tends to be worse close in, so it’s pretty damaging in Tonga itself,” explained Mr Musson.

“But with regard to the further effects around the Pacific, like the west coast of North America, I would not expect the the effects to be terribly strong.

“A tsunami advisory is just a warning to be aware rather than a statement something very dangerous is imminent,” added the seismologist.

“It’s always best to be careful about these things, but I would expect that it will be downgraded fairly soon.

“That doesn’t help the people in Tonga, of course who’ve had their homes destroyed by the tsunami,” he said. 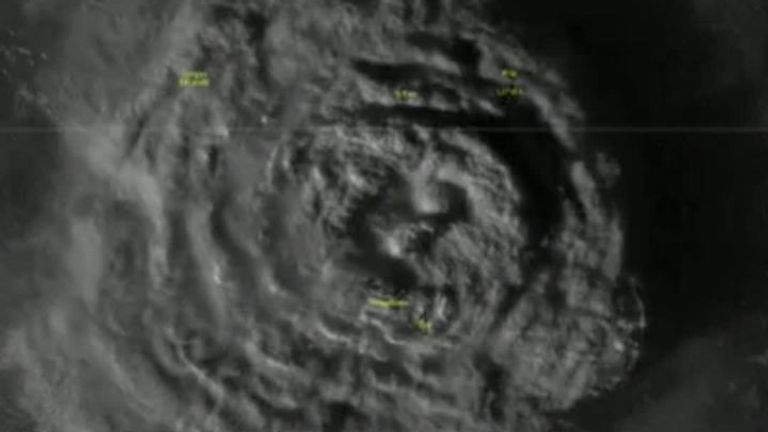 A convoy of police and military troops reportedly evacuated Tonga’s King Tupou VI from his palace near the shore as residents headed for higher ground.

Scientists had observed massive explosions, thunder and lightning near the volcano after it started erupting early on Friday, the Matangi Tonga news site reported.

The site said satellite images showed a three-mile wide plume of ash, steam and gas rising up to 12-miles into the air.

Tonga's Hunga Tonga volcano just had one of the most violent volcano eruptions ever captured on satellite. pic.twitter.com/M2D2j52gNn

More than 1,400 miles away in New Zealand, officials were warning of storm surges from the eruption.

The country’s national emergency management agency said it expected “strong and unusual currents and unpredictable surges” to hit the north and east coast of the North Island and the Chatham Islands.

“Tonga is around 2,000km away from New Zealand. Reports of people hearing the sonic booms across New Zealand.”

COP26, scheduled to end Friday, will now continue on…