In this handout photo from the Ukrainian Presidency press office on Aug. 23, 2022, President Zelenskyy attends a ceremony to mark Ukraine's Day of the National Flag in Kyiv.

Ukraine celebrates its independence day on Wednesday, commemorating 31 years since the country broke free from Russian dominance under the former Soviet Union.

Anniversary events have been restricted amid security warnings of further Russian attacks.

President Zelenskyy says Ukraine was ‘reborn’ when Russia invaded, in an emotional speech marking independence.European leaders have sent messages of solidarity. The EU’s Ursula von der Leyen and Germany’s Olaf Scholz both pledged to support Ukraine for “as long as” necessary.Kyiv has banned public celebrations commemorating Ukraine’s independence from Soviet rule. Kharkiv and Mykolaiv have also imposed curbs. It follows warnings of increased Russian attacks.Washington is expected to announce an additional roughly $3 billion (€3 billion) in long term military aid for Ukraine.The UN nuclear watchdog says it will will visit the Russian-occupied Zaporizhzhia nuclear power plant in Ukraine within days if talks to gain access succeed. In Russian-occupied Crimea, the governor of Sevastopol said Russian air defences shot down an unspecified number of Ukrainian drones near the city on Tuesday night. The claim has not been confirmed.Russian media say a former city mayor has been detained for “discrediting the Russian army”.

UK will stand with Ukraine ‘for however long it takes’ — Johnson

Boris Johnson  praised the courage of Ukrainian people in defending their homes and determination to decide their own destiny.

‘Europe is with you, today and in long run,’ von der Leyen tells Ukraine

The European Union will continue to stand by Ukraine’s side “as long as it takes”, European Commission President Ursula von der Leyen said on Wednesday morning, on the occasion of Ukraine’s Independence Day.

“You are fighting to uphold your sovereignty and to protect your freedom in the face of naked aggression,” von der Leyen in a short video statement published on her Twitter account.

“We can never match the sacrifices you are making every day, but we can and we will stand by your side.”

As head of the executive, von der Leyen has played a prominent role overseeing the EU’s response to the war, including six rounds of sanctions against Russia, €2.2 billion in macro-financial assistance for Ukraine, the activation of an emergency law to fast-track asylum applications and an ambitious roadmap to achieve energy independence.

“Our schools have opened their doors to over 3 million Ukrainian children so they can continue to learn and study and come home, once this war is over,” she said.

Some of von der Leyen’s far-reaching proposals, however, were watered down by member states, who often struggled to find a compromise between their diverging positions, particularly when it comes to the hot-button topic of Russian fossil fuels.

After six months of war, the question on how to finance Ukraine’s costly reconstruction is still up in the air.

“Together with you, we will rebuild your cities – brick by brick. And replant your gardens and fields – seed by seed,” the president said. “Thanks to your sacrifice, your children will grow up in a Ukraine that is just and free.”

Russian Defence Minister Sergei Shoigu said on Wednesday that the slowing pace of Russia’s military campaign in Ukraine was deliberate, and driven by the need to reduce civilian casualties.

“Everything is being done to avoid casualties among civilians. Of course, this slows down the pace of the offensive, but we are doing this deliberately,” Shoigu said at a meeting in Uzbekistan.

Russia’s war effort in Ukraine has made little progress in recent months, after its troops were pushed back from Kyiv in the early weeks of the war. The UK’s latest intelligence assessment on Wednesday said Moscow switched to more modest aims after its initial invasion failed to topple the government in Kyiv and occupy most of the country.

Since the February 24 invasion, Russian missiles have bombarded civilian areas and buildings across Ukraine, killing thousands.

In its daily assessments since the start of the war, British defence intelligence has said Russia’s tactics increase the risk of civilian casualties, and has accused Moscow of “directly” targeting civilian evacuation routes from areas already under attack.

Shoigu is in Uzbekistan to attend the Shanghai Cooperation Organisation, a Eurasian political, economic and security institution.

“I am convinced that the current differences will not be able to destroy the centuries-old basis of sincere and good neighbourly relations between the peoples of the two countries,” Lukashenko said in the message.

Belarus will continue to advocate “strengthening friendly contacts based on mutual respect at all levels” with Kyiv, he assured.

Lukashenko, who has been in power in Belarus since 1994 and is widely seen as having rigged the last election in order to stay there, opened his country’s territory to the Russian army so that it could launch its assault on Ukraine on 24 February.

German Chancellor Olaf Scholz has assured Kyiv of his country’s support in the face of Russia’s invasion, in a message to mark Ukraine’s national day.

“Germany stands firmly by Ukraine today and for as long as Ukraine needs our support,” he said in a video message posted on his Twitter account.

“We will continue to deliver weapons (…) and train Ukrainian soldiers with state-of-the-art European equipment,” the chancellor added.

He referred to Tuesday’s announcement whereby the German government will deliver €500 million worth of additional weapons to Ukraine, some of which will be handed over in 2023.

“We will continue our sanctions, we will provide financial support to Ukraine and we will help to rebuild the destroyed cities and villages,” Scholz insisted.

The chancellor reiterated his intention, expressed on Tuesday, to organise an international conference for Ukrainian reconstruction, in Berlin at the end of October.

“The blue and yellow of the Ukrainian flag and the starry strip of Europe are linked,” the chancellor said.

“Dear Ukrainians, your country will chase away the dark shadow of war because it is strong and courageous and because it has friends in Europe and in the whole world,” he added, concluding his message with the slogan “Slava Ukraini” (Glory to Ukraine).

President Volodymyr Zelenskyy told Ukrainians on Wednesday in an emotional speech to mark 31 years of independence that Ukraine was reborn when Russia invaded on February 24 and would recapture annexed Crimea and occupied areas in the east.

In the recorded speech aired on the six-month anniversary of Russia’s Feb. 24 invasion, Zelenskyy said that Ukraine no longer saw the war ending when there was peace, but when Kyiv was actually victorious.

“A new nation appeared in the world on February 24 at four in the morning. It was not born, but reborn. A nation that did not cry, scream or take fright. One that did not flee. Did not give up. And did not forget,” he said.

The 44-year-old wartime leader delivered the speech in his trademark combat fatigues in front of Kyiv’s central monument to independence from the Russia-controlled Soviet Union.

Zelenskyy vowed that his country would fight “to the end” without “any concessions or compromises” with “Russian terrorists”.

“We will fight for (our land) until the end,” he said. “We have been holding on for six months. It is hard but we have clenched our fists and we are fighting for our destiny.

“For us Ukraine is the whole of Ukraine. All 25 regions, without any concessions or compromises,” he continued.

The streets of central Kyiv were unusually empty on Wednesday morning following days of dire warnings of the possibility that Russia could launch fresh missile attacks on major cities.

Russia’s war has brought death, destruction and misery to Ukraine over the last six months. But how has the conflict changed the rest of Europe?

Read our in-depth round-up below: 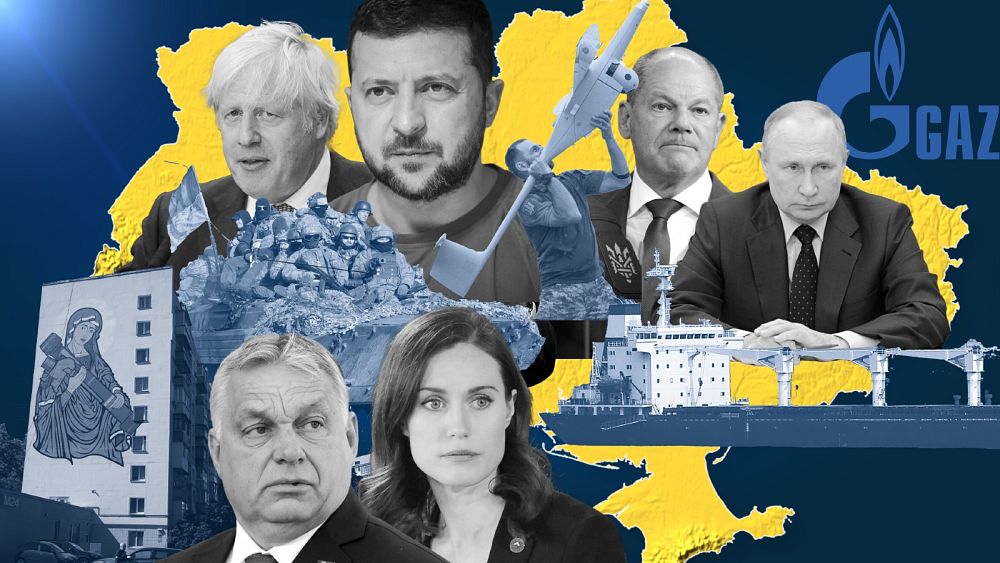 Ukraine war at six months: How has the conflict changed Europe?

Read our A-Z country guide that charts how six months of war in Ukraine has changed Europe, sometimes forever. #UncoveringEurope

The latest British defence intelligence update on the war paints a sorry picture for Russia, six months after its invasion.

It says the Donbas offensive is making minimal progress and a major Ukrainian counteroffensive is anticipated. “Operationally, Russia is suffering from shortages of munitions, vehicles and personnel,” the UK defence ministry tweeted.

“Morale is poor in many parts of its military and its army is significantly degraded. Its diplomatic power has been diminished and its long-term economic outlook is bleak. Six months in and Russia’s war has proven both costly and strategically harmful.”

For a detailed summary of Tuesday’s developments in the Ukraine war, please click here.

Ukraine war live: No doubt our goals will be achieved, vows Russia’s…

The initiative harnessing the power of sport to change…

Football clubs urged to give single-use plastic cups the…