Ukrainian soldiers take positions outside a military facility as two cars burn, in a street in Kyiv, Ukraine, Saturday, Feb. 26, 2022.

Ukraine’s President Zelenskyy issued a defiant message to his people on Saturday morning.

Ukraine’s president Volodymyr Zelenskyy refused a US offer to help him leave the city amid growing signs that Russia wanted to overthrow his government.

Several Ukrainian cities including Kyiv have seen a heavy night of fighting, forcing thousands of civilians to take shelter in basements and the city’s metro systemPresident Volodymyr Zelenskyy refused US offer to help him leave Kyiv ahead of a Russian takeoverThe Ukrainian military has claimed to have pushed back Russian forces at several points, including the main thoroughfare of Victory AvenueThe Russian military claims to have captured a key airport, after seizing control of the Chernobyl nuclear plant and destroying dozens of Ukrainian military facilities.Neither countries’ latest military claims have been independently verifiedUkraine says 198 of its civilians have been killed and more than 1,000 injured since Russia’s invasion began.Nearly 120,000 Ukrainians have fled, says UNHCR. Poland refuses World Cup qualifying match against Russia over Ukraine invasion

✈️ Estonia has announced a ban on Russian airlines entering its airspace, and wants other European Union countries to do the same. Writing on Twitter, Prime Minister Kaja Kallas said “there is no place for planes of the aggressor state in democratic skies.” Estonia’s Baltic neighbour Latvia has already cancelled all flights by their airline airBaltic to Russia until 26th March. Earlier, Poland, Czech Republic, Bulgaria and the UK imposed restrictions on Russian planes. The Russian Civil Aviation Authorities has retaliated by banning planes from those countries using Russian airspace.

The mayor of Kyiv has said there will be a tighter curfew in the Ukrainian capital tonight, as Russian forces press on the city and reports of fighting in outer districts continue. Mayor Vitaly Klitschko said on Telegram that the curfew will extend from 5pm until 8am and “all civilians on the street during the curfew will be considered members of the enemy’s sabotage and reconnaissance groups.”

The previous curfew imposed two days ago was from 10pm until 7am.

Russia’s invasion of Ukraine has forced 120,000 Ukrainians to flee to neighbouring countries, says the UN refugee agency. “Almost 116,000 have crossed international borders as of right now. This may go up, it’s changing every minute,” said Shabia Mantoo, a spokeswoman for UNHCR. “It’s very fluid and changing by the hour.”

She did not immediately have details on numbers by country, but by far the largest numbers were arriving in Poland, where some 2 million Ukrainians have already settled to work in recent years, driven away by Russia’s first incursions into Ukraine in 2014 and seeking opportunities in the booming economy of the European Union neighbour.⬇️ Read more about the people fleeing to Poland, Romania and Hungary. 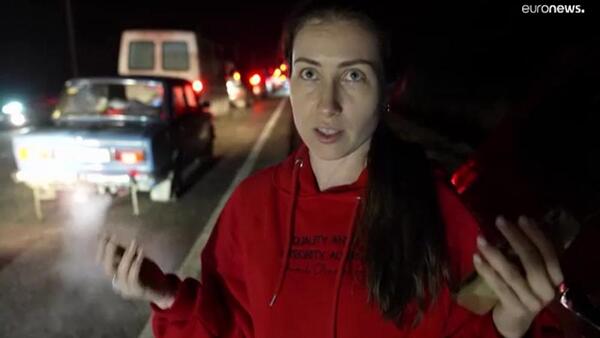 ‘It’s crazy traffic’: Ukrainians queue for hours to get into Poland

euronewsTens of thousands of Ukrainians are fleeing to the country’s borders in a desperate attempt to escape the violent fallout from the Russian invasion12:39

French officials say marines patrolling the English Channel area have intercepted a cargo ship sailing under the Russian flag and escorted it to the port of Boulogne-Sur-Mer for an investigation.

The interception of the ship, carrying cars, early Saturday was triggered by financial sanctions levied days ago against Russia for its invasion of Ukraine. Maritime spokesperson Veronique Magnin said it appeared to be the first such action in the English Channel.

The approximately 130-meter-(427-foot) ship was headed from Rouen, in Normandy, to Saint Petersburg, and was stopped near Honfleur, Magnin said.

Customs officials carrying out the investigation were verifying if the vessel is indeed linked to Russian financial interests, the spokesperson said. The process could take up to 48 hours.

The French government has given maritime officials the power to intercept vessels suspected of contravening the sanctions, she said.

Russia warns it could rethink nuclear pact with West over sanctions

A senior Russian official has warned that Moscow could react to Western sanctions over its attack on Ukraine by opting out of the last remaining nuclear arms pact and freezing Western assets.

Dmitry Medvedev, Russia’s former president and currently the deputy head of Russia’s Security Council chaired by President Vladimir Putin, shrugged off a set of crippling sanctions imposed by the European Union, Britain, America and other allies.

Medvedev described the sanctions as a reflection of Western “political impotence.”

In comments posted on his page on Russian social media VKontakte, Medvedev said the sanctions could offer Moscow an excuse for a complete review of its ties with the West, suggesting that Russia could opt out of the New START nuclear arms control treaty that limits the US and Russian nuclear arsenals.

Medvedev also raised the prospect of cutting diplomatic ties with Western countries, saying “there is no particular need in maintaining diplomatic relations” and adding that “we may look at each other in binoculars and gunsights.” He pointed at the possibility of freezing Western assets in the country if the West proceeds with threats to freeze Russian assets.

Ukraine’s president has called on Germany and Hungary to have the “courage” to approve Russia’s exclusion from the SWIFT interbank system. That’s a measure being considered by the EU in response to Russia’s invasion of Ukraine and to which Berlin and Budapest are reluctant.
“Almost all EU countries are already in favor of excluding Russia from SWIFT” Zelensky said on Saturday.”I hope Germany and Hungary will find the courage to support this decision,” he said.Separately, Zelenskyy tweeted about a phone call he had with prime minister Mario Draghi where the Italian leader apparently said he also supports moves to block Russia from accessing the SWIFT system. “Ukraine must become part of the EU” Zelenskyy said.

Turkey starts land evacuation of its citizens from Ukraine

The Turkish government has started to evacuate its citizens from Ukraine by land.

Foreign Minister Mevlut Cavusoglu says about 20,000 Turks live in Ukraine and so far 5,000 of them have returned. Separately, about a hundred protesters have gathered in Turkey’s capital Ankara to demonstrate against the Russian invasion.Ukrainians living in Turkey, including children, as well as Turks joined the protest, holding up Ukrainian flags and banners that read “Putin get out of Ukraine.”The Ukrainian Ambassador to Turkey, Vasyl Bodnar, was also at the protest and said the war was a “genocide against the Ukrainian people,” according to Turkish news agencies.11:42

The Czech Republic’s government has become the latest European country to approve a plan to send more weapons to Ukraine.

The ministry said the Czechs will transport the weapons and deliver them to a place determined by the Ukrainian side.

The Czech Republic has already agreed to donate some 4,000 pieces of artillery shells worth 36.6 million Czech crowns (€1.47 million) to Ukraine.

Euronews reporter: “All night long we could hear the explosions”

Residents of Kyiv spent Friday night huddled in shelters for safety, as the Russian invasion continued to target locations in the capital.”The situation is too dangerous now in the Ukrainian capital. All night long we could hear the explosions” said Euronews reporter Sasha Vakulina from an undisclosed location in Kyiv. “Early in the morning we were all woken up by a very very loud explosion which we now know was a missile hitting a residential building in the area” she says. Rescue workers say at least six civilians were injured by a rocket that hit a high-rise apartment building on the outskirts of the Ukrainian capital.

Petro Prokopov, a firefighter who was taking part in rescue efforts, said the building on the southwestern edge of Kyiv near Zhuliany airport was hit between 16 and 21 floors on Saturday. He said at least six people were injured and apartments on two floors were gutted by fire. Emergency responders have evacuated 80 people.

Kyiv’s Mayor Vitali Klitschko posted an image showing a gaping hole on one side of the apartment building.

She reports that local authorities are doing their best to give regular updates and warning people to be careful about possible “fake news” and other types of disinformation they might see online.

Adults who share beds with a partner have more restful sleep, study…

Many men think they’re healthier than they are, skip…

Ukraine war: NATO’s refusal to set up a no-fly zone…